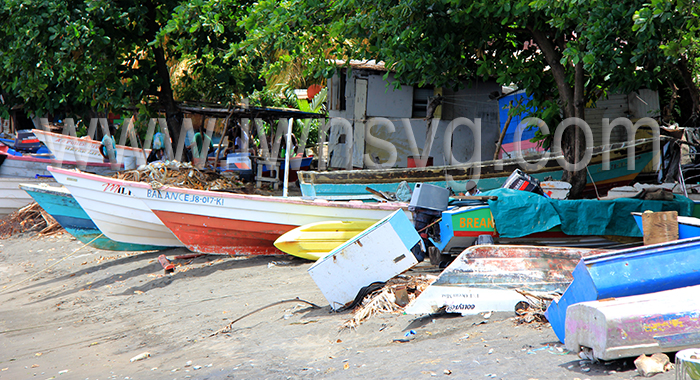 The fishing base in Rose Place is to be relocated because of the construction of a new port in Kingstown.

The first consideration when conceptualising a large project, such as the proposed new port in Kingstown, is how it would benefit people.

However, Opposition Leader said that when the Unity Labour Party administration talks about these projects, the focus is always on the million of dollars to be spent.

“What you don’t hear them say is how is this going to impact or benefit the people of this community. Whether it’s with the Argyle airport, and, most recently, with the quarry up in Richmond and here now they say the second largest project in the country,” he told a New Democratic Party (NDP) community meting in Rose Place on Thursday.

“The question is, how is that going to benefit the people here first and foremost, and the country overall?” said Friday, who is also president of the NDP.

He said it is no wonder that after 20 years in office in which the government boasts about what it has done, “the people in this country are poorer today than they were 10 years ago”.

The government has said that the fishing base in Rose Place would have to relocate in order to make way for the construction of a new port in Kingstown to replace the 60-year-old one at the eastern end of the city.

Friday said that the government has budgeted about EC$600 million for this project, adding that an even larger amount spent to build the Argyle International Airport did not improve the economic realities in the country.

“… the IMF said there were more people unemployed in St. Vincent in 2017 than there were  in 2001,” he said, referring to the year when the Unity Labour Party came to office and when the airport was completed.

“How does this square with when this government tell you that they’re doing all these development projects?”

He said that planning for projects should begin with the community.

“You say like this community here, what are some of the challenges we have here? But more importantly, what are the opportunities that are available?”

The opposition said it is known that the people of Rose Place have ben involved in fishing.

“What they are looking for is an opportunity to improve the way in which they catch fish and improve the amount that they earn from catching fish.”

The NDP has proposed major developments in the fishing sector, Friday said.

“That we will develop our seascape, our seawaters, our blue economy  — which is a sexy new term that they’re using for anything to do with the sea — because we have so much of it around us so that we can improve the lives of our people, whether it’s in the fishing villages, those who are involved in the export of fish, those who are involved in selling or in the restaurants and so forth, anything that is connected with it, that we are going to improve it.”

Friday said that in the budget debate, the opposition outlined its vision for the blue economy.

“Now the government hear, they start talking it, they using the language too, saying that the country has to harvest more fish because of more export capacity.

“… they start with the export, and then they try to decide what product we have to export. That’s backward,” Friday said.

“You’re supposed to start with what you have. You grow and you find markets locally. When you’ve exhausted local markets, you sell overseas and so forth. That is how it was happening until the government got involved.”

He said that despite the government’s statements about the blue economy, it only budgeted EC$300,000 to help the fisher folk to improve their capacity, including fleet improvement.

“That can’t even buy two boats and the local fishermen are being squeezed out,” Friday said.

In April, the government announced that it would use US$4 million from and ALBA Bank loan to expand the national fishing fleet.

“So what we’re going to do, the government going build its own fleet. They’re going to go out and buy boats. They are going to, in a sense take over the fishing industry because they’re going to be the most modern part of it.

“And then the fisherfolk like … the people here in Rose Place and those in my community and in … Clare Valley and other places, they are still going to be in the same position they’re in now,” Friday said.

“No assistance to help them to improve their capacity. If you want to help fisher folk it’s not about producing more fisher folk. It is about helping fisher folk to produce more fish.

“If somebody is coming into it, and the people who are traditionally doing it, … they’re still left the same place, but you’re exporting 10 million pounds of fish. How does that help those people? How is that development? That is fundamentally what is wrong with the way in this which is government has approached this problem,” the opposition leader said.

He said that what is needed is to work with fisher folk to ensure they develop their capacity to do better for themselves.

“And when you add them all together, then this community is stronger, is more prosperous. And when … all those fishing communities doing well coming together, we have a richer country, we have a stronger economy. We have people who are independent, who have a future and things won’t be so hard where you have to eat only bread and butter,” Friday said.