MP promises to ‘fly anything’ to protect Rose Place fishers 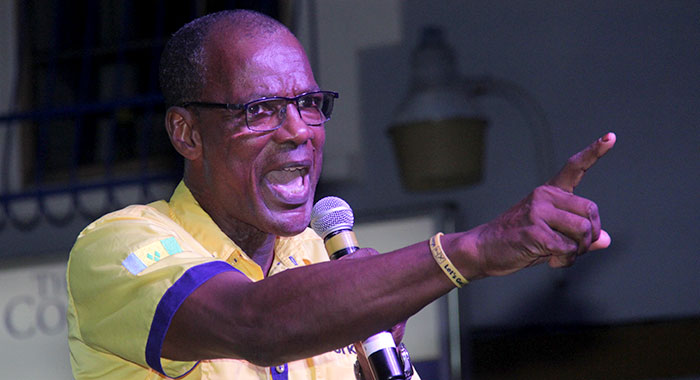 An MP who once stoned a church has promised to “fly anything” to ensure fishers in Rose Place are treated fairly amidst the construction of a new port in the Kingstown.

For decades, the fishers have been hauling out their boat in Rose Place — the only sandy beach remaining in Kingstown — but the government has said they have to relocate because of the port construction.

“And for you, the people of Rose Place and the fisher folk, I will fly anything to make sure you get what is justly yours,” Cummings said.

“[Opposition Leader] Dr. [Godwin] Friday and my colleagues know that I don’t play games. I am deadly serious. The people’s livelihood is one of the reasons why I got involved in politics. The fisher folk make a significant contribution to this country.”

Cummings was making the case that the government did not have to uproot fishers who are based in Rose Place to construct the port.

He said that the new port will not even be located in Rose Place, but that the government had to relocate the people who were living on the beach because of the funding arrangements with the Caribbean Development Bank.

Cummings said he welcomed the relocation of the people, adding that he had been calling for this to be done since 2005.

He, however, said there are four people who have been living on the beach who the government has refused to give houses.

“You see how they’re wicked. I have made representation over and over and they’re still not listening. But I tell them the clauses in the contract make it abundantly clear that they must deal with the people who have been living here,” Cummings said, referring to the funding agreement.

“This is not a joke. It’s not a matter of begging. It’s a requirement for them to do it. I just want to remind you, nothing in the project is coming down here in Rose Place. The project stays in Central Kingstown.”

He said the government had mentioned a sewer line in the area, suggesting that the fishing boats had to be removed to deal with that issue.

“… absolute hogwash,” said Cummings, a former manager of the Central Water and Sewerage Authority, a state-owned company that is responsible for the sewer system in Kingstown.

“I could tell them where the sewer line runs and all you need to do is to extend the sewer line further out to sea. They don’t have to come and dig up along the shore. They’re using that as a ploy to get you off the beach. I am telling you factually, that is the case.”

He said he wants to see the government deal with garbage coming out of the stream on the eastern side of Rose Place.

“… that we reserve part of the beach for people to come and bathe when we stop the garbage and other filth from coming into the sea here and that the other half we develop for people to continue to bring their boats when they go out to sea and anchor them right there in Rose Place as they’ve done for years and you will continue to do for years to come,” Cummings said.

“That is what I promise to you the people in Rose Place because it’s reasonable, it’s just and the government has to listen to the people and I will not sleep until it is done.”

He said he knows he has the backing of Friday, who is also president of the NDP, of which Cummings is chairman.

“I know I have the backing of the people of Rose Place and West Kingstown. My brothers and sisters, we’ve come here tonight because I want you to recognise how spiteful, how bad-minded, how greedy these people are,” Cummings said.

He noted that one of his colleagues had mentioned at the meeting that Senator Julian Francis had given up the Ministry of Transport and Works.

“But you all know don’t know why. Nothing happens in the Ministry of Works anymore. They’re not doing any projects; all the money dey in the port project. That is what he’s overlooking. That is what Julian Francis is overlooking — where the money is. So nobody else could handle those projects?

“But let them know, let them know they have to pass through Daniel Cummings, because the will of the people is paramount. And the will of the people is just and reasonable. And more importantly, the project financiers have mandated that the government shall, the government shall, with its own resources, find alternative accommodation for every person who is displaced.”

Some years before entering politics in 2005, Cummings stoned a church that he said was operating a sound amplification system illegally.

He was never charged in connection with that incident and has remained an elected MP since 2010 — after serving as a senator – despite the incident being used to smear him in every election campaign since 2005.