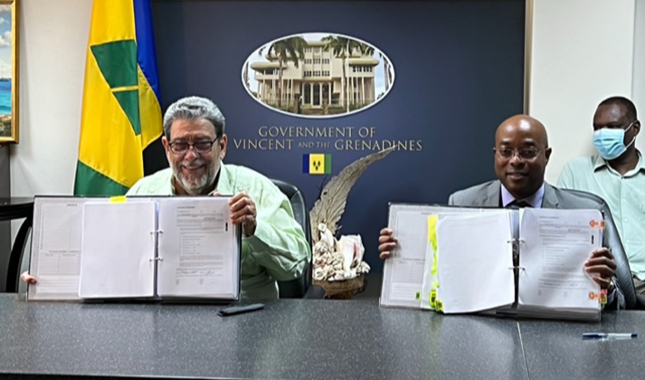 The government of St. Vincent and the Grenadines has signed a contract for the construction of a state-funded 92-room Holiday Inn Express and Suites, with Minister of Finance, Camillo Gonsalves, reiterating that the state has no interest in becoming a hotelier.

NH International (Caribbean) Limited has been awarded the contract to build the EC$52 million hotel at Diamond, about 10 minutes from Argyle International Airport (AIA).

It will be financed partially through a grant from the CARICOM Development Fund, financing from the National Insurance Services and local funds, the finance minister said.

“The government is adding over the next two years or so almost 350 rooms to the hotel room stock,” the finance minister said.

He said the state-funded Marriott Hotel at Mt Wynne will have 250 rooms, as part of the government’s efforts at increasing hotel room stock and building the tourism sector.

“The government of St. Vincent and the Grenadines is not interested in being a hotelier so we’re not going to start a ministry of hotel operations,” the finance minister said.

“So I just wanted to point out that our interest, from a policy perspective, is to add room stock to St. Vincent and the Grenadines. We do some of that through our own resources as the government. We do some of that by attracting investment from Sandals, Royal Mill, Maya Suites, La Vue Hotel, PACE — the Black Sands Resorts and all the rest of it.”

The finance minister told the signing ceremony, in Kingstown, on Tuesday, that the country “climbed that mountain of air access” with the opening of AIA five years ago.

He said that in the absence of an international airport, the hotels that developed were small, “essentially, that one flight by LIAT could fill them”.

The finance minister said that the country now has to have “different layers and different levels of hotels” and the government recognised “that we needed to have room stock in the vicinity of the airport at a particular price point”.

He said that a 92-room hotel within 10 minutes of the airport is significant, as it would become the largest hotel in St. Vincent, but will quickly be eclipsed with the completion of the Beaches Resort.

“So by the end of next year — in time for the tourism season next year, this hotel will be built and we’ll continue the complete transformation of the Diamond area.”

He said that a decade ago, the area in Diamond where the hotel will be built was essentially a pasture.

Gonsalves noted that the Sir Vincent Beache Athletic Stadium is under construction in the area, which is also home to the Centre of Excellence and the Hospitality Training Institute.

“And this particular hotel will be one of the jewels of that transformation.

“…Venezuelan flights are coming up from Venezuela before they move on to Cuba and the like, you know where some of these guests will be staying. So it’s an important part of the renaissance of the Diamond area.”

He said the government envisages the Holiday Inn Express at Diamond to be a teaching hotel for students at the nearby institute.

“I’m very, very happy that we’re at this point. I thought that we might have gotten here a little sooner, but again, we all had challenges related to COVID and the volcano.