Court asked to jail man who locked son, 4, in house and went to carnival 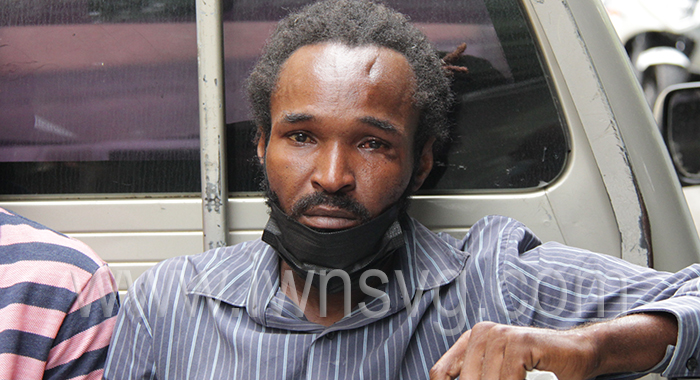 Casmore Hepburn sits in a police pickup as he awaits transportation to prison on Thursday, June 9, 2022.

A man who locked his 4-year-old son in their home last Sunday night and went to a carnival event could know his fate on Monday, after the court hears from Child Protection Services.

However, Prosecutor Station Sergeant of Police Renrick Cato has already made it clear that he thinks Casmore Hepburn should get a short prison stint to help sober him up.

The prosecutor noted that a few years ago, a mother who acted similarly returned home to find one her children’s bodies among embers after fire destroyed their home.

Cato said that in the extant case, his concern was about the welfare of the child, but having learnt that the child is in good hands, Hepburn should go to jail.

“… based on the facts and circumstances and based on the maximum penalty outlined by Parliament (five years), I believe the defendant needs a short, sharp shock,” Cato said.

“He must be in a place where he can think about those things and realise that if it wasn’t for a custodial sentence he would not have come to his senses to realise what he is doing is completely wrong. It is unfair to the innocent 4-year-old child.”

The prosecutor said he could only imagine what the child experienced when he woke up hungry in the dark house, with police officers present.

“I am asking that the sentence be a true reflection of how serious the court views this kind of offence and the defendant also must realise that what he did was not only wrong but extremely unfair to that 4-year-old.”

Home alone in the dark

On Thursday, at the Serious Offences Court, Hepburn pleaded guilty to a charge that on June 5, at Lower Questelles, being charged with the duty of providing the necessities of life for the child, he, without lawful excuse, failed to do so.

The facts of the case, as presented by Corporal of Police 817 Stapleton, a prosecutor, are that Hepburn is well known to officers at the Questelles Police Station.

He lives with his 4-year-old son in a two-bedroom unfinished basement (“downstairs”) in Lower Questelles.

Hepburn is in the habit of going to a nearby rum shop to gamble at nights, remaining there into the early morning and, at times, will have his son with him.

He also consumes alcohol and, at times, people have to assist him and the child to get home.

On one occasion, detective Corporal 45 Forde, who is attached to the Questelles Police Station, met Hepburn gambling at a rum shop around 5 a.m., while his son slept on two bar chairs at the venue.

Hepburn was intoxicated and Forde warned him about his actions and assisted him and the child in getting home, as Hepburn was unable to walk on his own or lift the child.

Then, last Sunday, June 5, about 9 p.m., someone telephoned the Questelles Police Station reporting that the defendant had locked his son in his house and gone to the South Leeward Carnival street jump up

Forde led a party of officers to the home and met the front door hooked. He opened the door and noticed the house was in total darkness.

The officer used his flashlight and went into the house and met Hepburn’s son sleeping face down. The child, awakened by the detective’s flashlight, jumped off the bed and began to cry. He told the police officer, “Daddy gone town and left me alone home.”

Forde packed a bag of clothes and took the child to the Questelles Police Station and contacted Child Protection Services, who took the child to a children’s home operated by a local charity, in conjunction with the government.

About 9:55 that night, Hepburn went to the Questelles Police Station and told officers that he had gone to buy cigarettes at a nearby shop and when he returned, he was told that the police had taken his son.

The police officers noticed the strong smell of alcohol on Hepburn’s breath and observed that he could not stand on his own.

Forde explained to him what was reported and what the police had done and that charges would be brought against him.

On June 8, about 11 a.m., the defendant returned to the station at the request of the police. He was cautioned and interviewed and volunteered a written statement.

He said he had gone down the road and had been talking to a friend and did not realise that the time had gone that far.

Hepburn was arrested and charged.

In mitigation, Hepburn told the court that he was wrong to have left the child at home alone. He said he had no one to look after the child and had gone to buy something, and met the child gone when he returned.

He said he had been taking care of the child from very young, noting that he is now 4 years old.

He said that since the officer met him in the shop, he never did that again, and was wrong to have locked the child in the house last Sunday.

Hepburn asked to be forgiven.

He told Chief Magistrate Rechanne Browne, who was presiding, that the mother of the child had put the child up for adoption in Canouan, where he also worked.

The Social Welfare Department informed him of the mother’s action and he took custody of the child and has been taking care of him since then.

He said he returned to St. Vincent after he was laid off in Canouan.

Hepburn told the court he would not say he has a drinking problem, but drinks when he feels like — only on weekends.

At this point, a woman who was in the gallery became disruptive and the magistrate ordered her to leave the courtroom.

On inquiries, the court heard that the woman is Hepburn’s girlfriend.

“No wonder there is so much disorder,” the chief magistrate commented.

“Don’t mind she? So why she can’t take care of the boy?” the chief magistrate retorted.

Hepburn asked to be given a chance, saying he has a 14-year-old son who he has taken care of “since he was small”.

The chief magistrate told Hepburn that the 4-year-old is at an age where he can learn any language that he is taught.

“So when he was taken to a rum shop, his knowledge of that might be great. When you put him in such a situation, how can you know that he has not been in anyway interfered with?” Browne said.

“He is at a rum shop where a lot of vices are present. Do you know if he has been scared? There are too many instances of children who are neglected,” she said, and told Hepburn that if he is unable to care for the child, there are many people who are willing and able and trained to take care of children.

“Please. I don’t want to lose him,” Hepburn told the court.

The chief magistrate asked to hear from Forde, who told the court that “on the face of it, the child is looking well. He looks healthy.

“The only issue is he taking the child to the rum shop and that was reported by concerned persons in the area. I only met him one time at the rum shop. Persons in the area are talking about it but they don’t want to come out and tell him to his face what he is doing is wrong,” the detective told the court.

He said the only conversation he had with the child was on the night at the house, when the child also said that he had not eaten for the day.

“But the father came and was saying something different that day,” the detective said.

The defendant, however, said that the child had eaten, as he had taken the child along with him when he went to work, and the employer cooked for them.

“You sure you’re not mixing up another day?” the chief magistrate asked.

Hepburn said he was sure as he had also taken along bread and sausage for them to eat but they had the hot meal that his employer cooked.

The chief magistrate, however, pointed out to Hepburn that he had also said that he was down the road talking to someone.

Forde told the court that Child Protection Services took custody of the child that night and would have a better knowledge of his status.

“They are to have further conversations with the child to see if there are any other issues,” he told the court.

Hepburn said that he felt “bad” that the child had to be taken away and placed in a shelter because of his negligence.

The chief magistrate asked him if he thought that the child was feeling good in the dark.

“Adults afraid of darkness, much more a child,” she said.

She told Hepburn that it is one thing when children, after growing up, stray from the teaching of their parents and another when they are not provided for.

“You have to make sure that the best interest of the child is paramount. Children did not ask to come here. Some of them, if they had a choice and beheld who they were getting as parents would have said, ‘No!’

“It is our duty to ensure that we give them the best opportunity. We might not be the richest but the discipline and morals must count for something.”

In his submissions on sentencing, Cato pointed out an incident a few years ago where a child died in a fire when the mother left the child home alone.

“Here we are now, the district police met this defendant after 5 in the morning in a rum shop gambling and this 4-year-old sleeping on chairs in that shop,” Cato said, noting that the COVID-19 pandemic is not over.

He further noted that Forde warned Hepburn and assisted in taking him home.

“That is the extent to which the corporal went and gave him a warning. Then, that is not enough,” Cato said, noting that the South Leeward Street Jump-up and Soca Monarch were held on the night of the offence.

The prosecutor noted that concerned neighbours notified the police.

“And as the corporal rightly said, they keep on complaining about this defendant doing that. How can you lock a 4-year-old child in a house and go your merry way? At age 4, a child can do anything. I am sure he has a stove in his house.”

But Hepburn told the court that he makes sure there are no matches in the house.

“So you prepared?” Cato said, noting that when Hepburn went to the police station, he was so intoxicated, officers had to assist him.

“I want to know how talking to a girl can make you intoxicated,” the prosecutor said, triggering some muted laughter in the courtroom.

The prosecutor said that Parliament takes the offence so seriously that it set a maximum penalty of five years in prison.

He returned to the case of the child who died in the blaze, saying, “That young lady never thought that she would have met her children burnt.”

He said there is an old saying that persons who want children don’t get, and those who don’t want are having.

The chief magistrate said that among other things, she wants to hear from Child Protection about whether the child’s level of development is what is expected at his age, including whether he is speaking at that level.

Hepburn’s girlfriend waited outside the courtroom for him until he was escorted to prison. She stole a kiss on his cheek as he was being placed in a police vehicle to be transported to prison.

10 replies on “Court asked to jail man who locked son, 4, in house and went to carnival”