A sheep took me out! 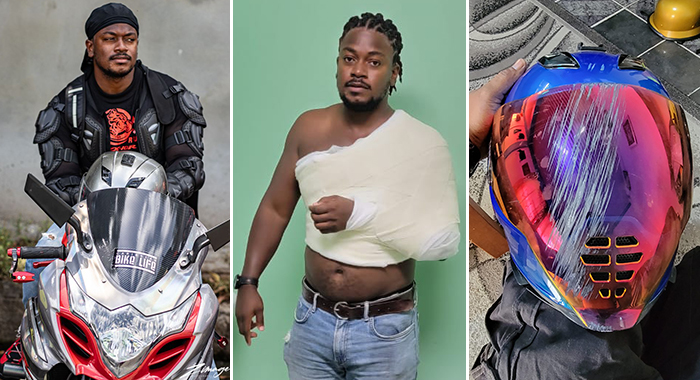 When I was younger, the children I grew up with would often play a game called “My Car”. One would simply sit and call out the number plates of passing vehicles as quickly as possible then stating, “That’s my car!” I didn’t find this game very appealing because I knew during that time as a young adolescent that some of those cars we saw, we would never be able to afford. However, we were hopeful that one day we could.

Motorbikes, on the other hand, were always on my radar. I had the posters; I would look at GP Moto Sports and would play the games. It was always something I really looked forward to owning in my lifetime. Bikes are so coo. They sound awesome especially when they shift gears. They have beautiful lines, they are fast and when you have a bike, you can zoom through traffic and always be on time. That was my thinking as a child.

As I grew, I became more aware of the dangers and risks that are associated with bikes. Statistically, it does not look good. People had a very negative mind-set and would say things like, “Bikes are not finished built.” “Bikes are death machines.” Amidst this, my passion for bikes grew. The ergonomics, the engines, the beastly look, it intensified when I was exposed to them even more in a culture which appreciates and rely on motorbikes daily, during my university years. There, I learnt to ride and had enough road experience, feeling confident in owning my personal motorcycle. Unfortunately, I was still faced with obstacles as I lived in an environment where people didn’t appreciate the beauty and benefits if owning a bike and would often try to change my mind. However, this wasn’t a deterrent for me as my love and passion was real.

When I was finally mature enough and financially capable of owning a motorcycle, I went for it. O the joys of riding, the freedom, the exhilaration, the machine that can take you places a car cannot. It was so exciting. However, this was short-lived just because of the ignorance and misconceptions of a culture around motorcycles and some livestock owner who was careless in securing their sheep.

On June 5, 2022, three fellow riders and I were commuting to Rose Hall. It was a bright sunny day, No one could ask for a better day for riding. We were not doing anything crazy; we all had full motorcycle PPE as usual. When we approached Keartons, Barrouallie, our ride ended in a horrendous accident leaving me with a dislocated fractured left shoulder.

That was the most pain I’ve endured in my life! They say labour pains and toothaches are the hottest pains? Well fractures should be high up on the pain scale as well. Fracture plus dislocation. I had already called it while lying on the asphalt awaiting a transport to take me to the nearest polyclinic.

When a biker is involved in an accident, it’s usually a result of some of following factors: excessive speed, making him or her unable to control the machine; mechanical failure; environmental factors like wet road, poor visibility; obstacles like unknown gravel or sand; and in my case, unattended livestock wandering in the public road. Come on, no one rides to fall.

Most Vincentians, from my experience, do not bother with things unless it affects them directly. All over, unattended livestock are roaming the public streets of St. Vincent and the Grenadines and no one is doing anything about it. The countless vehicular accidents and damage to crops and property that people have endured over the last decade is beyond concern. If you are rearing livestock, why won’t you secure them safely? Aren’t they of value?

On June 5, approximately 10:30 a.m., a poor sheep had to be slaughtered in the most horrible way because its owners were irresponsible in keeping them tied and safe.

Thanks to God for his protection over my life and the motorcycle gears I invested in to reduce the risk of injuries and road rash in the event of unfortunate situations like these, you probably would have been reading a very different narrative.

“But you were speeding!” they said. What’s the definition of speeding? Speeding? Were we reckless? Or were we cautious? We were on a straight almost empty road on a Sunday! But just to clear the air, bikes are built differently from cars, a car going 40 km/h will sound very differently from a bike that’s going at the same speed. Also, at no point was the machine going so fast that I lost control of it, until the obstruction of the animal.

Persons are focused on the bike. That’s my preferred mode of transportation! The bike can never be the issue at hand here.

Speed is relative. Have you ever been in an airplane especially an airbus? How fast do you think they travel? Does being in a car versus a plane moving at the same metric speed feels or sound the same? If you’ve never remotely been on a motorcycle, remember speed is relative. And motorcycles have to travel at an optimal pace for it to function properly. At least, mine has to.

Bikers over the years have been labelled with all sorts of connotations that we know about, like hooligans, outlaws etc. However, people from all walks of life ride motorcycles. Just because you’re not a fan of bikes means everyone will share the same view. “Boi, yo’ get in an accident. You should done with bikes; time to sell that.” That’s the comment we get most of the time.

Why not put things in place to keep us and other motorists safe?

Install clear and visible road signs, ensure livestock and other animals are not free to roam public roads, ensure trucks and other construction equipment cover aggregate when transporting it, make sure that oil spills are cleaned up, putting road cones a distance away from your vehicle if its broken down or if you are parking on the public road due to insufficient parking space where you live! And if they don’t comply or break these laws let them pay a fine.

So I assume if someone is involved in a vehicular accident for whatever reason they should stop driving as well? Sell their vehicle? Done with driving? Done with cars?

Different people ride motorcycles for different reasons — some to commute, it being a cheaper economic way of transportation, some for pleasure or recreational sport, some as a hobby, some simple convenience. However our society is so one-track minded and most persons who never had the experience of riding a motorcycle and don’t ever see the bigger picture are quick to condemn, but biker lives matter!

I’m not in any way trying to defend the reckless riders out there who may have their own agenda, because let’s face it, there are the few who may be reckless but we all shouldn’t be labelled the same. When I ride I do it out of passion and love for motorcycles. I respect the power of the machines, therefore, I always wear personal protective equipment because I’m aware of the risks. Life is a risk and that’s the risk I take. We all take risks in life.

Even though I wasn’t compensated for my injuries and my damaged motorcycle I want to create some awareness around these issues. To reiterate that the authorities can do more to ensure people are responsible and take care of their livestock because it’s not the first and it won’t be the last. Are we going to wait until someone’s injuries are fatal? Why do these trucks have to be so filled to the point where they leave aggregate in every corner they take? Aren’t there road laws? Why aren’t they being enforced? Why aren’t there penalties so persons can be accountable? Why do we allow some minibus operators to drive so recklessly when they are providing a public service?

We are in the 21st Century we claim that we are for tourism but don’t we have proper road signs, especially in the rural areas? Some people think bikers speed so much, put road signs in place. We can do better! These little things matter. Tourists, whether regional or international tourist, drive on our roads and these things can make a big difference in their driving experiences. All of these things and more are hazardous to us all.

I am not angry but just disappointed and sad, that I may never be able to ride again and that I live in a geographical location where I have to be put into a box, not able to live to my highest attainable standard, unable to express myself and my passions because of ignorance, lack of diversity and just a one-tracked mind society. That sheep could have cost me my life but it was not my time. An innocent lamb had to be slaughtered because its shepherd did not protect it by keeping them in a safe grazing pasture. I am here today, praise be to God. However, someone else may not have a similar fate.