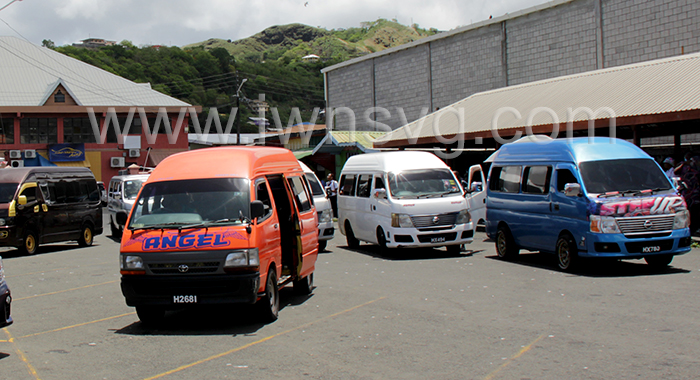 A minibus operator says that while consumers experience regular price increases at supermarkets and other stores, they never seem to accept that bus fares should also increase.

“I could remember in the mornings when your parents sent you to the shop to buy bread before you go to school, you walk with your bag and you get at least 10 bread for $1. Now, you are paying $2.50 for five of those same bread in a bag,” Abdul Woodley told iWitness News on Tuesday.

“I don’t know why when it comes to minibus asking for an increase in bus fare people think it’s just fuel. A minibus isn’t just running on fuel. It is everything around the operation of minibuses that is going up: insurance, licence; it’s everything.”

Minibus operators in St. Vincent and the Grenadines have asked the government to increase bus fares amidst rising prices resulting from COVID-19 pandemic supply chain disruptions and the Russia-Ukraine war.

Recently, Eastern Caribbean Group of Companies requested an increase in the price of flour and on Monday Vincentians began paying EC$16.41 per gallon for fuel, the highest in recent history.

“I used to buy my service parts for about $260 to $280. I went last Thursday to buy my usual service parts and it’s $414 for the same amount of stuff that I am accustomed to buying.”

Woodley told iWitness News that he services his minivan, which serves the Kingstown-Largo Height route, every three weeks.

“In terms of brakes, according to where you’re working you have to change your brake sometimes twice a week,” he told iWitness News.

“I’m in my 40s. I could say at least about 30 years I could speak about minibus operating for $1 and you see the inflation on everything around,” he said, noting that after many years, in 2011, the fare on his route was increased from $1 to $1.50.

“It’s really concerning because I am one who has a passion for minibus operation. I have a passion for it. I’m doing it now for how many years and I started to get a lot of concern about support from the authorities especially. It’s like they’re not showing any interest, any concern in the wellbeing of minibus operators.”

He said that amidst rising prices, other private sector entities are taking steps to ensure that their businesses survive.

“They will make sure to raise the price of the commodities and they pass that on to the consumers. When it comes to minibus operators, I don’t see why you have a private, licensed and insured business that the government does not have a handle in in terms of giving you a subsidy or something to soften the cost of the operation, but on the other hand, you have to get right away from them if you need a 50 cent increase,” Woodley told iWitness News.

He said that minibus operators are “doing the work of the government”, adding that many countries have a government-owned public transportation service.

“And I can’t see why it is right that every other business could raise the prices of commodities and so on to suit themselves, to make sure that their business stay alive but the authorities, every time you talk about an increase in bus fares, you always hear they put it out there to the public.

“And everybody now, ‘Salary ain’t increase, how could we pay for bus fare?’ while everybody running to the supermarket when things rise, you have to pay; the hardware stores; whether they go out, at the restaurants or wherever.

“Everywhere else raising their stuff and people are going and they are paying, they are buying. Even if they complain, they have to do it and I think this is very unfair when it comes to minibuses that you’re going and hear about salary. If you’re talking about salary then you’re supposed to carry it straight across the board.”

“Why are they doing this to minibus operators? Why they ain’t take it on the radio talk shows and so on and talk about the hardware stores, the supermarkets, the restaurants, the people who sell in the market who’re raising their stuff?”

Woodley said that even the price for locally grown agricultural produce is increasing.

“We are paying higher import duties every single time, whether for fuel or whether it’s parts for the vehicles. Every time a new stock comes into the country, the price goes up. So, you’re actually always working at a loss. Your profit keeps on declining every time — every time,” he told iWitness News.