Man drags girl, 14, into cemetery, rapes her while having her period 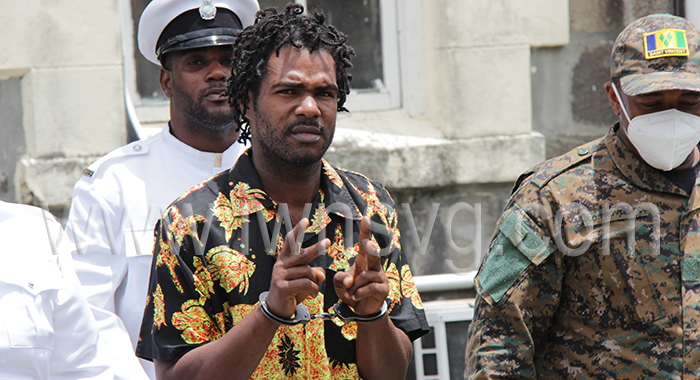 Rapist Shorn Bynoe is escorted to prison on Thursday, July 7, 2022.

A Lowmans Leeward man who dragged a 14-year-old girl from Massy Stores in Stoney Ground to the nearby Kingstown Cemetery and raped her even as she was having her period has been jailed for 14 years.

Shorn Bynoe, 30, avoided an even longer prison term having pleaded guilty, on May 26, 2022, to the charges of rape and abduction and, therefore, benefitted from a one-third discount on his sentence.

The 14-year sentence for rape is to run concurrent to the sentence of one year and eight months the court handed down for the abduction charge.

Justice Brian Cottle, who handed down the sentences at High Court No. 1, in Kingstown, on Thursday, also ordered that the 10 months and nine days that Bynoe spent on remand be deducted from the sentence.

The judge said that a sentence other than imprisonment could not be justified and, referring to the victim, said that the very young must be protected even from their immature and bad decisions

“Adult males must respect the right of young girls to be shielded from would-be predators,” he said.

The facts of the case, as presented by the judge, are that on June 8, 2019, the girl left her home in South Leeward without the permission of her mother and went to a community in Central Leeward to visit her boyfriend.

The child left Central Leeward around 6 p.m. and travelled to the area of Massy Supermarket in Stoney Ground, just outside capital Kingstown, where she bought sanitary pads as she was menstruating at the time.

She went with a friend to the corner near Milton Cato Memorial Hospital (MCMH) and spent some time there.

Around 11 p.m. the victim went back to Massy to try to get a bus to her home in South Leeward.

While the girl was there, Bynoe approached and spoke to her then dragged her to the Kingstown Cemetery, even as she screamed.

A resident of Cemetery Hill saw the incident and called the police, who responded promptly and conducted a search of the cemetery with flashlights.

However, the police found nothing suspicious and left.

After the police left, Bynoe removed the girl’s clothes. As he was doing so, the girl told him that she was having her period, but Bynoe responded that he did not care and proceeded to rape the child.

After the incident, they left the cemetery together and they met a young man who became suspicious as he noticed that the girl’s clothes were soiled.

The young man spoke to the girl, who he recognised as a resident of his community, and offered to take her home.

As he began to walk off with the girl, Bynoe followed them.

A passing police vehicle stopped the three of them and the girl was taken to the MCMH where she reported against Bynoe.

Doctors medically examined the child and, among other things, found sandy debris in the folds of her vagina.

As part of their investigations, police revisited the scene with Bynoe the following morning and found a condom wrapper and a $5 bill.

Bynoe, who was arrested the previous night, admitted to having had sex with the child but said it was consensual and that he had paid her EC$40.

In handing down his sentence, Justice Cottle noted that at the time of his crime, Bynoe was 28 years old and had 20 previous convictions, mostly minor offences for possession of illegal drugs.

The judge did not take these into account when sentencing Bynoe.

He said that in the social inquiry report, one of Bynoe’s relatives described him as criminal in all forms, a view echoed by other members of his community, which felt that society would be better off if he was imprisoned for a long time.

None of the people interviewed had anything positive to say about Bynoe.

For his part, Bynoe said he was neglected as a child and suffered physical abuse and repeated beatings from his mother.

He said that on the night of the incident he had been drinking alcohol and smoking illegal drugs.

He said that while he physically raped the girl, spiritually he was absent.

Bynoe explained that whenever he drinks and smokes, it is like a force comes inside of him and he is no longer in his right mind.

He, however, continued to drink and smoke everyday and felt incapable of stopping.

The judge noted that Bynoe had expressed remorse for his behaviour and had apologised to the virtual complainant and asked for her forgiveness.

The pre-sentencing report also said that in prison, Bynoe conducted himself in an exemplary manner and the court felt that this augurs well for his prospects for rehabilitation.

He said that there had been serious degradation of the child, who was experiencing her period at the time of the assault.

Justice Cottle pointed out that Bynoe had callously responded that he did not care and raped the child on the dirt in the cemetery.

Victim now angry all the time

The judge cited the pre-sentencing report as also saying that the child has been negatively affected in a psychological manner.

Her personality has changed; she is angry all the time and lashes out at everyone, including family and friends.

Bynoe was literally twice the age of his victim, the court noted.

The court established a starting point of 15 years in prison, half of the maximum 30 years — a life sentence.

Justice Cottle said the fact that the girl was dragged into a public cemetery late at night despite being on her period was aggravating.

He noted that Bynoe’s convictions include resisting the arrest of a police officer and assaulting another.

Bynoe has a poor record Justice Cottle said, but noted that by pleading guilty he had spared the girl the trauma of reliving her experience by testifying before strangers.

The judge said that the aggravating features of the case merited an increase in the sentence from 15 to 21 years.

He, however, accorded him the full one-third sentence for his guilty plea, although it did not come at the earliest opportunity.

In light of the totality principle, Justice Cottle ordered that the sentence for rape, as well as the one for abduction run concurrently.

No illusions about avoiding jail

Earlier, mitigating on behalf of Bynoe, Counsel Carl Williams told the court that his client was under no illusion that he could avoid a prison sentence for his crime.

“It would be quite ridiculous if I say the aim of my mitigation is to persuade the court to impose a suspended sentence. I would not even attempt to do that,” Williams said.

He said Bynoe was under no illusion as to the seriousness of the offences to which he has pleaded guilty and acknowledged that he has done a bad thing and did not in any way seek to justify it.

Williams said that the circumstance in which the rape takes place should affect the sentence.

He said there was no evidence that Bynoe was in a position of trust or had any familial relationship with the child.

The court ought to consider there was no video recording of the incident, no transmission of disease, and no pregnancy as a result of the offence, Williams said, mentioning factors that the court would have considered aggravating.

He urged the court that apart from the bad things spoken of Bynoe by his relatives and community, to consider the interview in which Bynoe indicated the sort of abuse he underwent as a child.

“Also, there is in that report and interview with the prison authorities which is much favourable to the prisoners,” Williams said.

The lawyer said that Bynoe had indicated to him how much he regretted and how much remorse he felt for having assaulted the child.

“He has even spoken to the social worker with regard to his remorse also,” the lawyer said, adding that Bynoe pleaded guilty as soon as he had received legal advice.

Kayla Toney, holding for Allana Cumberbatch, appeared for the Crown at Thursday’s sentencing.

10 replies on “Man drags girl, 14, into cemetery, rapes her while having her period”