Jail for bike thief who pulled cutlass at cops 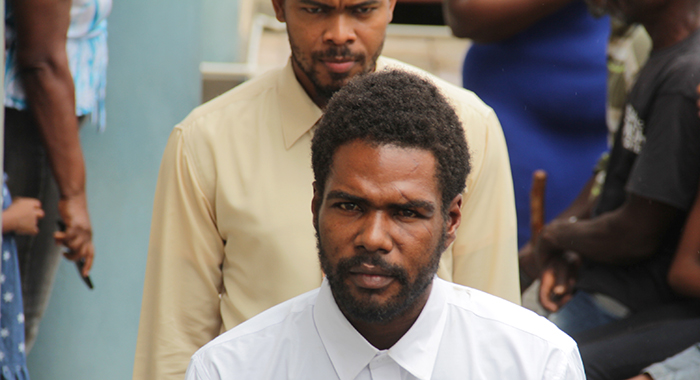 Shorn Bynoe outside the Serious Offences Court. He will spend the next seven months in jail for his crimes. (iWN photo)

A man who had evaded arrest since stealing a bicycle in Kingstown in March was, last week, jailed for six months after he brandished a cutlass in Middle Street this month, including at a police officer who had responded to the report.

Shorn Bynoe pleaded guilty at the Serious Offences Court on Monday to a charge that on March 19, at Bentick Square, Kingstown, he stole one grey and white BMX stunt Bike, valued at EC$7,000, the property of Jetson Edwards.

The Lowmans Leeward man further pleaded guilty to a charge that on June 13 at Middle Street Kingstown, he had in his possession an offensive weapon, to wit a cutlass.

According to the facts, read by Corporal Atnel Ash, on March 3, about 1:15 a.m., the virtual complainant was sitting on his bicycle at the bus stop at Bentick Square while using Wi-Fi in the area.

Bynoe came by and asked Edwards, 22, for $2 and Edwards told Bynoe that he did not have $2.

Bynoe then asked Edwards about the bike and told him to get off, which Edwards refused to do.

Bynoe then began shouting as if he was calling for someone, Edwards dropped the bike and Bynoe picked it up and rode away.

Edwards was heading in the direction of Kingstown when he saw Bynoe leaving a food stall.

Edwards told the food stall owner what had happened and was able to find out that Bynoe is “Red Man” of Lowmans Leeward.

He made checks but failed to locate Bynoe or the bike.Edwards later reported the theft to the police.

In relation to the offensive weapon charge, police at the Criminal Investigation Department in Kingstown received a report on June 13 about a man brandishing a cutlass and making threatening remarks in Middle Street on June 13.

Detective Constables Sam and Leigertwood were dispatched to the scene, where they met Bynoe walking along in front of Jax Enterprises Ltd.

Sam identified himself to Bynoe by way of his police identification card and Bynoe responded by pulling a brown handled cutlass from his waist, resulting in Sam drawing his service pistol.

On seeing this, Bynoe stood back and handed over the weapon to Leigertwood.

He told the officers, “Me nah bin going do anything with the cutlass.”

Bynoe was arrested and taken into custody, where, around 4:30 p.m. when reminded that he was still under caution, told officers, “Alyo charge me.”

In mitigation, Bynoe told the court that he had met Edwards in Kingstown and had asked to borrow the bike.

He said he gave Edwards a book bag containing a pair each of Nike and Jordan slippers.

At this point, Chief Magistrate Rechanne Browne asked Bynoe if he was sure that he wanted to talk about Jordan slippers.

“You were here for slippers before,” she said.

Bynoe, however, continued his story, telling the court that when he returned with the bike Edwards was not there.

“Don’t’ come here with that nonsense, the chief magistrate told Bynoe, adding, “Today is not a day for nonsense.”

Regarding his possession of the cutlass, Bynoe told the court that he had just come from the countryside with some eddoes.

He said that when the officer arrived, they asked him where the cutlass was and he pulled it out of his waist and handed over to them.

“You seem to have no regard for people’s property,” the chief magistrate told Bynoe, adding that she was saying that based on his criminal record, “which isn’t even up to date”.

The chief magistrate remanded Bynoe into custody and set his sentencing for the following day.

She noted that Bynoe had 19 convictions of a similar nature.

“That is just too much. You are young and you just seem to be repeating these things.”
Regarding his possession of the cutlass, the chief magistrate noted that the incident occurred in broad daylight, was brazen, and resulted in the police officer having to draw his weapon to secure Bynoe’s compliance.

“There are too many people brandishing cutlasses,” she said.

Browne sentenced Bynoe to six months in prison for theft and seven months for possession of the cutlass.

Browne noted that while the offences occurred on different days and should attract consecutive sentences, the court would order that they run concurrently, meaning that Bynoe would only spend seven months in jail.