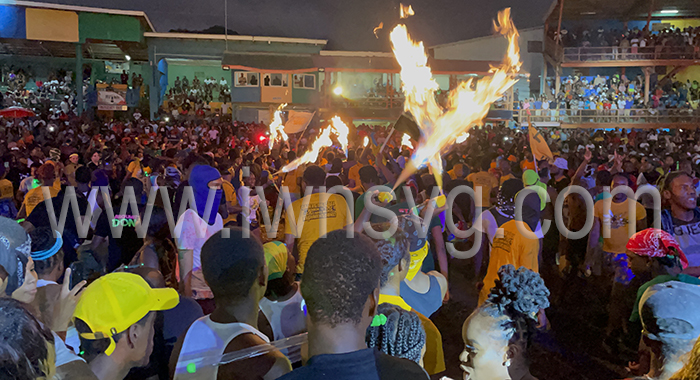 The government sanctioned large gatherings for Vincymas 2022, regardless of vaccination status, as was the case here for Soca Monarch on July 2, 2022.

The COVID-19 infection numbers this week — one week after the end of Vincymas 2022 ended — could influence the government’s decision on whether to rehire teachers who were fired last December for not taking a COVID-19 vaccine.

Prime Minister Ralph Gonsalves seemed to have anticipated comments about the law requiring teachers to be vaccinated to enter classrooms, even as Vincentians, regardless of their vaccination status, partied together for the first carnival since the pandemic struck in 2020.

The thousands of Vincentians who attended events organised by the state-owned Carnival Development Corporation and private promoters over the last two weeks did not have to prove their vaccination status, wear facemasks, or observe physical distancing.

However, to enter the classroom at public schools, teachers have to be vaccinated, as is the case for other public servants and a wide cross-section of public sector workers, including doctors, nurses, and police officers.

Hundreds of teachers as well as a number of police officers and health workers were fired last December over their decision to not take a COVID-19 vaccine.

The St. Vincent and the Grenadines Teachers’ Union and the Public Service Union are suing the government over the dismissal of the public sector workers.

“An issue hasn’t come up but which would arise and which I had alluded to sometime before,” Prime Minister Ralph Gonsalves said on radio on Sunday.

“We have had carnival, we are going to see in the next few days whether there’s a spike or not in COVID.”

There has not been any major spike in cases since some of the largest fetes for Vincymas 2022, which took place beginning on the last weekend in June.

On June 28, the country had 97 active cases, compared to 77 on Sunday – 12 days after some of the largest crowds for Vincymas 2022 had assembled.

The country also recorded three COVID-19 deaths during that period, taking the total to 114.

Speaking on WE FM, Gonsalves said:

He further said that another consideration would be what parents would say “in relation to the liberalisation of any conditions.

The prime minister said that the consideration is  “not only about those teachers who chose not to take the vaccine and who did not meet the requirement in law.

“So those are questions which may emerge within the next couple of weeks,” he said, adding, “Well, it is not unreasonable for anyone to give consideration to their emergence or re-emergence but it is not, again, a simple straightforward issue.

“And, of course, fundamental to all this is what would be the advice tendered by the chief medical officer and those who are entrusted in law to provide relevant advice to the state authorities in making determinations.”

The prime minister said that as always he would anticipate questions that may arise and “provide a framework for the possible consideration of a solution.

“I just raise that because that emerges from the carnival period as a factual matter,” Gonsalves said, adding that he was sure that the chief medical officer and the health authorities are reflecting on that.

He noted that Sunday was five days since Mardi Gras, when Vincymas 2022 ended.

“We should begin to see if there is going to be any significant spike that tomorrow, Tuesday, Wednesday, we would see how the numbers emerge in what normally would be the incubation period for a virus, where it becomes manifest, the symptoms and the like. At least, as far as I understand, that’s the scientific learning.”