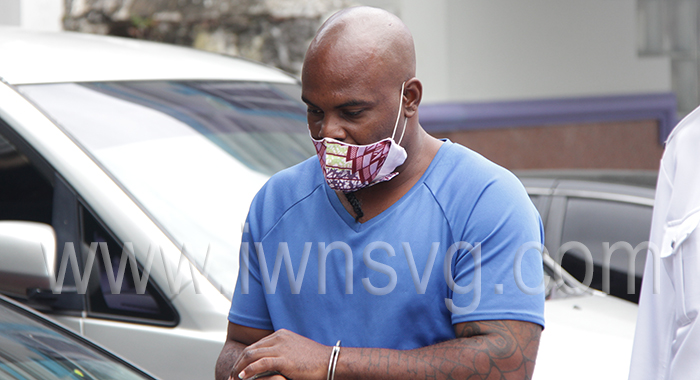 Rapist Terrance Dasent, left, is escorted to prison on Wednesday, June 29, 2022 to serve the remainder of his sentence.

“I know to myself it have worser (sic) thing happen to that young lady than what happened between both of us,” Terrance Dasent, a 36-year-old omnibus conductor, of Kelbourney, said at his sentencing hearing before Justice Angelica Teelucksingh at High Court No. 2, in Kingstown, on June 29.

His comments came as the judge and Dasent’s lawyer, Carl Williams, who represented him pro bono, were trying to explain to him what the court meant when it spoke about the category of psychological harm that had been inflicted on the victim.

The judge attempted to interrupt Dasent, who persisted, “I know because when we were…”

When Justice Teelucksingh regained Dasent’s attention, she and Williams told him that the court was dealing with what he had done to the victim.

“I understand. But what I am telling you, when I was with her, she told me other things happened to her than what I did to her — what happened between both of us.”

Dasent will spend 13 years and 3 months in prison for his crimes.

At the beginning of the sentencing hearing, which had been postponed from June 24, the judge told Williams that she had re-read the victim impact statement and had taken into account the overall impact of the crimes on the victim.

Justice Teelucksingh said she had initially considered the crime as having had “serious” psychological impact on the victim, but, on review, felt it was “extreme”, as per the categorisation under the sentencing guidelines.

She said she was open to hearing if the defence had anything to convince her otherwise.

But Williams said it was one incident in which Dasent committed a number of offences.

“We must remember that it is one mind, and the first sexual encounter would not do anything different to the mind than the second and the third,” the lawyer reasoned.

The judge, however, noted that there was repeated commission of offences against the victim.

Justice Teelucksingh noted that in the victim impact report, the victim said, “I still relive the memories of the incident and I no longer feel comfortable living in my own home and sleep elsewhere.”

“If it was one rape, she would be saying the same things,” Williams countered.

As the judge and the lawyer were debating the issue, Dasent began to address the court, saying that he did not understand what the judge had said regarding three rape charges with one person.

“What I am saying, from 2010 –” Dasent was saying, when his lawyer told him that they were addressing the three rape charges to which he had pleaded guilty.

The judge then said she would keep the consequences of Dasent’s crime as category 1 — having resulted in extreme psychological harm.

After confirming the time that Dasent had spent on remand, the judge said she was going to stand the matter down so that Dasent could consult with Williams about the discussions that had taken place.

Dasent, however, persisted, and his lawyer, speaking from the bar table, told him that the court was speaking about the effect that the entire incident had had on the victim.

The judge, in attempting to explain, told Dasent, it was akin to what someone meant when they said they have nightmares.

Dasent, however, told the count that he understood that the victim had said she was feeling the effect “and whatever she’s feeling”.

His lawyer attempted to interrupt him but Dasent asked to be allowed to continue.

He said he and the victim were taken to the crime scene.

Dasent said that at the Family Court — where the preliminary inquiry was held — the police gave a different reason why the victim was taken back to the crime scene in 2020 to take different measurements.

But Williams and the judge told Dasent that the discussions were about how the victim feels about have been raped.

“I understand it is about how she feeling. But right now, I am in jail,” Dasent said.

He said that “the other day” he went to the hospital and he met the victim there “and both of us talk good and I told her myself that I plea guilty to the court”.

But the judge said that the point she was making was that not because a victim speaks well with the assailant means that it has taken away how the victim feels about what had happened.

“So she may — I don’t know — have been able to talk to you but I want you to understand something: it doesn’t take away how she feels about something that happened to her.”

The judge said that only the victim could say how the crimes impacted her, adding that the victim said that in the social inquiry report that she has problems sleeping at her home and that she still relives the memories of the assault.

The judge told Dasent that what the court did not want was to entertain things unrelated to the case.

She said that she and Dasent’s attorney had done what they could to explain the matter to him.

Justice Teelucksingh said it was not that she did not want to give Dasent an opportunity to talk but that she also wanted to focus the discussion on the incident.

“I am not saying that the lady did not go through a hard time in life. I am just saying she was asked how this incident affected her. She wasn’t asked about all the bad things that happened,” the judge said, adding that it is very unfortunate if the victim had gone through other bad things.

“But I am here to focus on this case and how this incident affected her,” she said, adding that she has come to understand that the victim is the best person to say it and there are guidelines for the court on sentencing the offender.

Justice Teelucksingh told Dasent that the guidelines also take into account the views of the offender.

On July 16, 2019, Dasent invited his victim — a 33-year-old mother of four children, aged 1 to 12 years old, who he had met sometime earlier — to Kelbourney after she asked him for money to pay utility bills.

He then tricked the woman into going into a forested area, saying that it was the way to the home of his aunt from whom he was getting the money.

He assaulted the woman repeatedly in the bushy area, holding a knife in his hand while he committed some of the crimes.