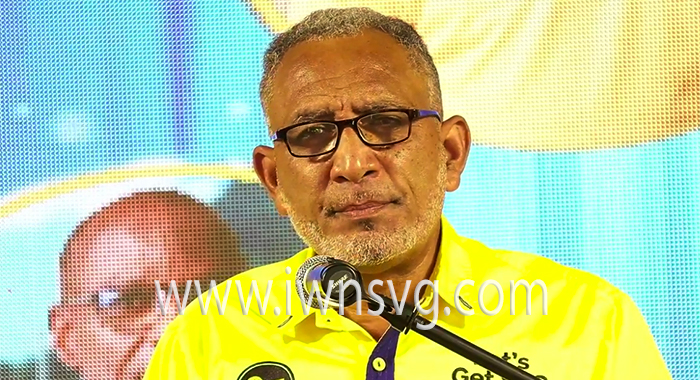 “I don’t see where ‘may’ and ‘consider’ and all of these vague expressions have any place now,” Friday said on radio in response to a statement by Gonsalves that his government may consider rehiring unvaccinated teachers.

“The leader of the teachers union, Mr. [Oswald] Robinson, was right in his comments. They said that this is overdue. It’s time now for the government to rehire the teachers, rehire the public servants,” Friday said, on Monday, echoing a call that Robinson made one day earlier.

The opposition leader said it was not merely a question of rehiring but of reinstating them to their post, with all benefits intact.

“… they must be reinstated, put back into the position as though their service had not been interrupted. It’s not a matter of reapplying for a new job, this is something that is required now, by the circumstances,” he said on his weekly programme on NICE Radio.

The government shelved COVID-19 protocols during Vincymas 2022 — the first since the pandemic — allowing people to take part in the festival regardless of their vaccination station.

There were also no requirements for people to wear facemasks or observe physical distance.

“You can’t have Vincymas, where people are jumping and so forth, on the one hand, it seems as though we are in a different dispensation with respect to COVID and then on the other, you’re saying that it’s dangerous for [unvaccinated] teachers and public servants to go into the classroom to teach and to provide service to the public. It simply doesn’t make sense,”

He said that when the government amended the Public Health Act and the Police Act, last year, “they basically were creating the groundwork for mandatory vaccination, essentially to fire people who did not take the COVID-19 vaccine”.

The opposition leader noted that his party protested in the streets against the move.

“Every day that passes proves that … the government was wrong in putting people on the breadline, because they didn’t vaccinate, when they could have done more to accommodate, to keep people safe. And at the same time maintain those services.”

He said that as much as the individuals who were fired were affected, so, too, were institutions, adding that a lot of the teachers who were fired still prepared students for their primary and secondary school-exit examinations.

“I know that happened in schools in Bequia, it happened throughout this country where the teachers, the committed, teachers went back and said, No, I have to help those students to prepare them because the replacements that they had sent into the classroom, supposedly as replacements for those experienced and qualified teachers, could not properly do the job.”

Friday said it is “high time that the government recognise that they made the wrong decision”.

However, if they want to ignore this,  “the circumstances are now such that you cannot ignore the fact that the way in which we approached the COVID-19 pandemic, here in St. Vincent and Grenadines and around the world, has changed as people are learning now”.

He said it is no longer a question of  “coping with a crisis”, but rather of learning to live with the COVID-19 virus and making the adaptations and being prepared to protect oneself and others.

He restated his New Democratic Party’s commitment that in government “we would do what was right and reinstate those persons and make sure they got their benefits back”.

The opposition leader said it is unconscionable to think that people who served for as many as 25 years as teachers, nurses, and police officers were fired for not taking the jab.

“… still only 30,000 Vincentians have been vaccinated — most Vincentians have not taken the vaccine,” Friday said. “They were in the majority in that sense,” he added, a reference to the dismissed workers.

“We may have our differences about whether you should or should not [be vaccinated] … but the point was that the government took a decision that was wrong when they said that they would fire those people or at least they tell them they can’t come to work,” said Friday, who is vaccinated and has urged others to take the jab.

“One day they are providing service in these classrooms or in the health service or in the police service and the next day, they are the most dangerous people in the country, they cannot come on the premises, they have to go home and they can’t provide food and sustenance for their families,” the opposition leader said.

“That is wrong and … virtually everybody except those persons in the ULP condemned that position. The religious community condemned it; the union’s came out very quickly and opposed it, as you would expect them to.

“The New Democratic Party took a stance, a principled stance, to say that we oppose the mandatory vaccination and we came out on the streets of Kingstown and demonstrated against it with others.

“How much more do the people have to suffer before the government would accept that this is long overdue for the government to reverse course and to make those people whole again?”

“You don’t want to show that you are wrong. Pride goes before a fall you know, and right now, those people who are still on the breadline who are still unemployed, who still can’t meet their obligations while the government, dilly dallying to say as to whether they’re going to rehire them or not, they must rehire them and they will rehire them,” the opposition leader said.