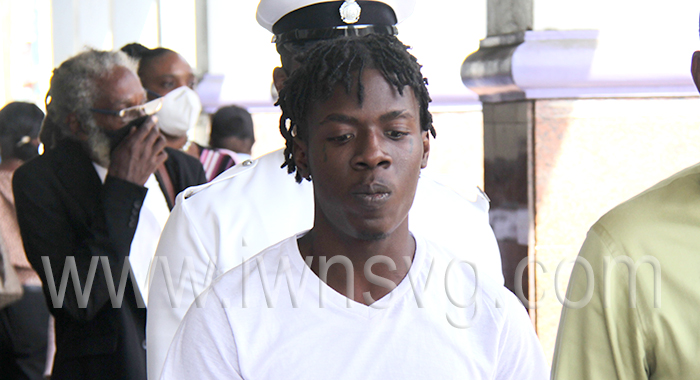 Robber Kelroy Henry returns to prison on Monday, July 18, 2022 to complete his sentence.

Justice Angelica Teelucksingh handed down the sentence on Kelroy Henry at High Court No. 2, in Kingstown on Monday.

Henry, who was 15 when he committed the crime, had already spent one year, five months and 19 days on remand.

The other accused, Dennis Richardson, was murdered in October 2019. Police are yet to make an arrest in connection with his shooting death.

Rose-Ann Richardson appeared for the Crown and Carl Williams represented Henry, pro bono, in the case in which he pleaded guilty, on Jan. 19 to the charges of robbery and possession of an unlicensed firearm.

The facts of the case are that on Jan. 30, 2017, about 10 a.m., the victim, Dwight Ryan, an office attendant employed with P.H. Veira & Co. Ltd., was on his way to FirstCaribbean International Bank with a black strap bag containing EC$34,750 in cash and EC$265.05 in cheques to be deposited at the said bank.

At the time, Ryan was in company with Fitzroy Phillips, a supervisor P.H. Veira & Co. Ltd.

As Ryan arrived on the steps of the bank, he felt the strap of the bag being pulled from his shoulder. He turned around and saw two unknown men, one of whom held on to the bag strap and was pulling the bag and pointing a gu nat him, saying, “Give me the bag! Give me the bag!”

The other man stood next to the gunman and pulled at the victim’s bag.

Both men managed to rob Ryan of the bag containing the money and cheques and escaped.

About 10:20 a.m. that same day, the victim reported the matter to police and Corporal 502 Millington visited the scene along with the victim.

CCTV footage was obtained from the Postal Corporation and further investigations were conducted.

One of the suspects fitted Henry’s description.

On Feb. 1, 2017, about 11:08 a.m., Henry was electronically interviewed by then Cpl 740 Duncan in the presence of Millington and Henry’s then lawyer, Grant Connell.

He was arrested and charged for robbery and possession of a firearm with intent to commit an offence.

The stolen items were never recovered.

She said that while Williams had asked for a suspended sentence, this was not applicable because of the use of an unlicensed firearm.

On June 17, 2022, Henry told the court that he was influenced by the co-accused, Richardson

The judge, however, said she did not see Henry’s account of what happened as evidence of intimidation or coercion, but would categorise it under youth and lack of maturity.

She noted that robbery carries a maximum penalty of life imprisonment — a notional sentence of 30 years.

Justice Teelucksingh further noted that when interviewed by the caseworkers, Ryan said that when the incident had recently occurred, he was unable to sleep at night and was afraid to make deposits at the bank.

Ryan reported that it was a horrible experience that really shook him up.

The judge began with a starting sentence of 60% of the maximum, or 18 year.

She said robbery is a prevalent offence and moved the sentence upward by two years, to 20 years.

The mitigating factors of the offence are that Henry played a minor role in the group offending and the judge also considered his testimony in court.

At one time, Henry held the bag and his confederate, who he said is the gunman, later took it, Justice Teelucksingh said, adding that the court viewed Henry’s role as minor.

She said that the CCTV footage and the still photos did not assist the court much as to who was the gunman and the court decided to give the benefit in Henry’s favour.

The court, therefore, moved the sentence downward by two years, bringing it back to 18 years.

She said that Henry has a relevant conviction, having been conceited at the Kingstown Magistrate’s Court on Nov. 5, 2018 and sentenced to 18 months hard labour.

Regarding the mitigating features of the offender, the court considered the submission and plea in mitigation by defence counsel, Henry’s oral testimony in court and the positive aspects of the social inquiry report.

In the May 11, 2022 report, family members said Henry’s relationship with birth mother continued to be almost non-existent.

He was raised and cared for by his father, with whom he shared an acrimonious relationship.

Henry’s father expressed great fear of him and said he felt safer with his son in prison.

However, to Henry’s credit, prison authorities described him as a cool and easy-going guy and a good prospect for rehabilitation.

The judge said that Henry had indicated that he felt sorry about the robbery and had asked the court for leniency.

After considering the mitigating features, the judge moved the sentence down by seven years.

She gave the full one-third credit for his guilty plea and deducted the one year, five months, and 19 days that he spent on remand, leaving a sentence of seven years and two months for the robbery charge.

Regarding the firearm charge Teelucksingh noted that the firearm was used midmorning in the heart of Kingstown.

She said that the firearm was carried with an intention to commit an injury, albeit it was not caused.

She established a starting point of 65% of the maximum 25 years, or 16 years two months.

Aggravating was the fact that the firearm was never recovered and that Henry has a relevant conviction, having been sentenced on Dec. 2, 2019 at the Calliaqua Magistrate’s Court to six months imprisonment

The judge sentenced Henry to six years and 11 days on the gun possession charge, to run concurrent to the other sentence.

Justice Teelucksingh also ordered Henry to enrol in any educational programme and training offered at the prisons.

Henry smiled as the sentences were handed down.