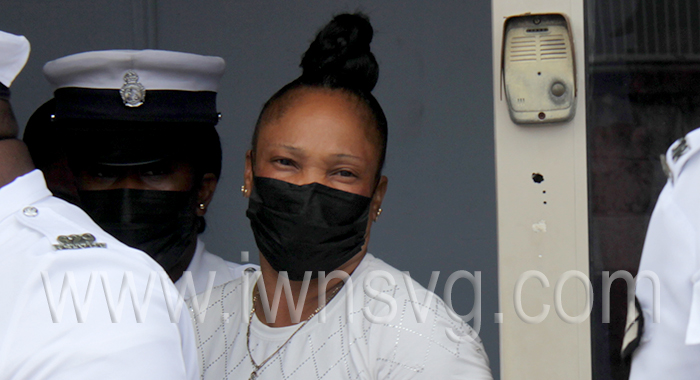 Sherma Adams leaves the Kingstown Magistrate’s Court for Her Majesty’s Prisons on Friday, July 22, 2022 to await her sentencing on July 25, 2022.

A janitor cried and begged her forgiveness as she was remanded to prison for the weekend for stealing EC$7,805 worth of jewellery from her former employer’s home.

The facts of the case, as presented by prosecutor Sergeant Cornelius Tittle, are that Adams was employed as a cleaner at Richards-James’ house from March 2022.

Richards-James is known to be a lover of jewellery and stores her most valuable jewellery in a jewellery box in the bathroom of her master bedroom.

The only other person with access to this bedroom was the defendant.

One day in March, Richards-James placed one of her gold bangles in the jewellery box, which also contained the items mentioned in the charge.

Richards-James subsequently checked and the bangle was missing. However, she assumed that she had misplaced it and took it for granted.

Sometime later, Richards-James checked the entire house and still could not find the bangle.

As a result, she became suspicious, informed the police and Adams became a person of interest in the matter.

Police took Adams into custody and she gave a caution statement admitting to the offence, which led the police to Cashwiz, a consignment and thrift store in Kingstown.

Cashwiz indicated to the investigator, detective Constable Darell Sam that they bought a number of items from the defendant and paid her EC$2,855 in instalments.

Only a gold chain and a gold ring, valued at EC$2,700, were recovered, Cashwiz having subsequently sold the other items that they purchased from the defendant.

In mitigation, Adams told the court she has children aged 31 and 28 and worked with her uncle before working with Richards-James.

She began to cry and Senior Magistrate Rickie Burnett, who presided, stood the matter down so that Adams could compose herself.

When the matter was recalled, he told Adams that as a 47-year-old woman with two adult children, she ought to have known that she would be a suspect.

“It is not rocket science. … So what went into your head? Let me understand.”

The magistrate said that Adams knew exactly how to dispose of the jewellery.

“Because I been have gold already,” the defendant said.

“You still have gold. I am seeing gold on you,” Burnett responded.

Adams said she had more gold than she was wearing in court, but got rid of them because thieves used to snatch chains from people’s necks.

“You got rid of them and thief those for Mrs Richards-James and you went Cashwiz and disposed of them.”

Adams told the court that she had no money saved.

“So what must the complainant do now that you have disposed of $5,000 of her valuables?” Burnett asked.

Adams asked Richards-James to forgive her.

“Forgiveness is between you, herself, and the Lord,” the magistrate said and invited Richards-James to take the stand.

‘I felt really violated and hurt’

Richards-James told the court that Adams was recommended by one of her (Richards-James’) co-workers and close friends who is also Adams’ cousin.

“So I didn’t do any background check because I took her word for it,” Richards-James said, adding that Adams did “a good job” as a cleaner.

She said that she first missed an anklet and then her graduation ring, but hadn’t worn the ring for a while.

Richards-James said she told Adams that if she came upon the anklet while cleaning to put it on the dresser.

Then, on Carnival Saturday, July 2, Adams did not come to work and did not answer repeated calls from Richards-James, who proceeded to do the cleaning herself.

The complainant said that while cleaning, she checked her jewellery box and found it “practically empty.

“I felt really violated and hurt,” Richards-James told the court, adding that the items complained of are what she knows are missing and it might be some time before she knows what else might be missing.

“I have had cleaners before; nobody has ever done this to me… I think she should be made an example. You can’t just walk in and move people’s things. These are things I gathered over time. I graduated since 1980-something.”

The complainant said that the money will not bring back the items but she will not just sit by, as actions have consequences.

She said that while Adams had not been working with her for a long time, she bought Adams a birthday gift.

“She lied and said the box fell over,” the complainant said, adding that the jewellery box is designed in such a way that it would not open even if it falls.

“It is a violation of your privacy,” Richards-James said.

The magistrate said that when one takes someone to work in one’s home, they are taking a chance.

“And now she comes before the court now with tears in her eyes and the tears should be a language that the court must understand. I’m not sure about that one.”

Adams told the court that she was crying because she did not know what had gotten into her head.

The magistrate told Adams that a lot went into her head, including taking the items to Cashwiz and getting money for them.

Adams said that Cashwiz had sold items for her already, including her microwave.

But the magistrate advised the woman to live within her means.

Richards-James told the court that Adams stole the other items even after she was asked about the anklet.

“Big life you call that. They want to live big life that they cannot afford… You have to work for what you want,” he told Adams.

“She is working with you, and she is removing your items and you have to pay her.”

The magistrate verified when Adams was arrested and noted that she was granted station bail the same day.

He said that he would remand her until Monday and will sentence her then.

The magistrate ordered the police to escort Adams from the dock.

Adams continued to cry after being removed from the dock and began walking to the complainant, crying loudly in the courtroom, “Miss James, please. I want you to forgive me.” “Take her outside, please,” the magistrate said.

11 replies on “House cleaner steals $7,805 in jewellery from homeowner”