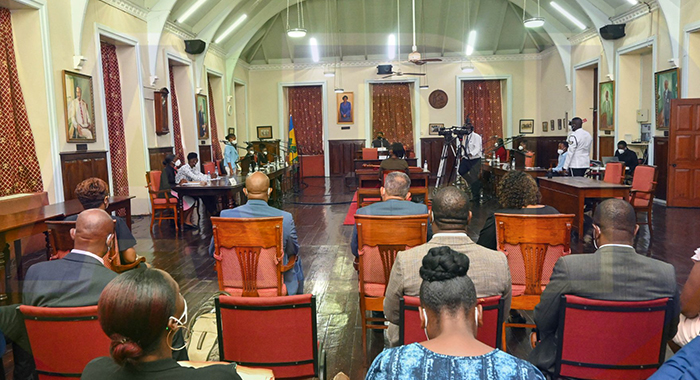 The youth parliament in session on Thursday, July 21, 2022. (Photo: API/Facebook)

Minister of Education Curtis King has expressed hope that last Thursday’s youth parliament — the first in St. Vincent and the Grenadines in 20 years — could lead to the “revitalisation or reformation” of the National Youth Council (NYC).

The NYC, of which King is a former president, has been dormant for almost two decades, with some of its former members accusing the ruling Unity Labour Party of orchestrating its demise.

ULP and the NYC in the years immediately after the ULP came to office in 2001.

King, speaking ahead of Thursday’s meeting of the youth parliament, said that the NYC “provided significant training for young people; young people who went on to provide and make great contributions in all aspects of the Vincentian society, including the Parliament”.

The retired educator, who was elected to Parliament in 2020, said there are “graduates of the National Youth Council” on both the government and opposition sides of Parliament

“… and I know what a wonderful training organisation NYC was and, therefore, I am looking forward to the revitalisation of the NYC and I really hope that this [youth parliament] will act as a stimulus for such an eventuality,” King said.

King said he was happy that a youth parliament session was being held, as it is an activity that he had been looking forward to “for a very long while”.

He noted his background in youth activism, adding,  “So, from that background, I am happy that the students are here to share their opinions”.

Lawmakers on both sides of the house, including then-acting prime minister, Saboto Caesar, welcomed Thursday sitting of the youth parliament.

“I could remember when I was in secondary school that I participated in two youth parliaments. So, I am really happy to see the showcase this morning,” Caesar said ahead of the commencement of the sitting.

Caesar and other lawmakers sat in the Stranger’s Gallery as the youth parliamentarians took charge of the house, debating and passing their Education Transformation Bill 2022.

Caesar, who was first elected to Parliament at age 30, said that he had a mantra in his early 20s “that St. Vincent and the Grenadines, we are in need of an exceptional cadre of multi-talented and multifaceted young persons who would not only be inward-looking but who would look to build better communities, build a stronger nation, build a stronger sub region, and a stronger region and a stronger world.

“And what we are seeing here today at the youth parliament, we are seeing persons coming forward to showcase their talents,” he said.

Meanwhile, Leader of the Opposition, Godwin Friday, also said he was happy that the young people were being given an opportunity to see how Parliament works.

“… and doing is always the best way to learn. So, I am happy to be here to support them,” he said.

The opposition leader said he had met a number of the youth parliamentarians in the Speakers’ Chambers.

“It seems like they are a bunch of very bright, eager youngsters so let us hope that they maintain that spirit and the enthusiasm for our system of government, politics in St. Vincent and the Grenadines,” he said, noting that the youth are the future.

Friday said he hopes the experience sparks something in the youth parliamentarians causing them to consider pursuing a career in politics.

“… they, I am sure, will go back to their communities and, having had this experience, would think, ‘Well, let’s see how I could continue with the work that we started here’ and, hopefully, it would spark them to continue to take and interest in our affairs, our political affairs, the way our system of government functions and that they make that commitment to preserve and protect,” Friday said.

And, Minister of Youth, Orando Brewster said he was excited about the youth parliament “because for a number of years we have been trying to get a youth parliament done here in St. Vincent and the Grenadines”.

He lauded Speaker of the House of Assembly Rochelle Forde, “who took the bull by the horn and said, basically, that we have to get this done.

“As minister of youth, it is interesting that we have youngsters in our country who are interested in parliamentary procedure here in St. Vincent and the Grenadines and we have to be a driving force to guide them an to make sure that they are a part of this because Parliament is not only for government ministers but it is also for the young people in St. Vincent and the Grenadines,” Brewster said.

The first-term MP said he would always give his blessing and support “to any of the youth here who are interested in parliamentary procedures and so on.

“And I can echo the sentiment of the government as well because as you can see here, we have quite a number of ministers who turned out to encourage our youth here in St. Vincent and the Grenadines and to make sure they are in the mix when it comes to government business,” Brewster said.