‘I think I was destined for this,’ Luta says of diplomatic post 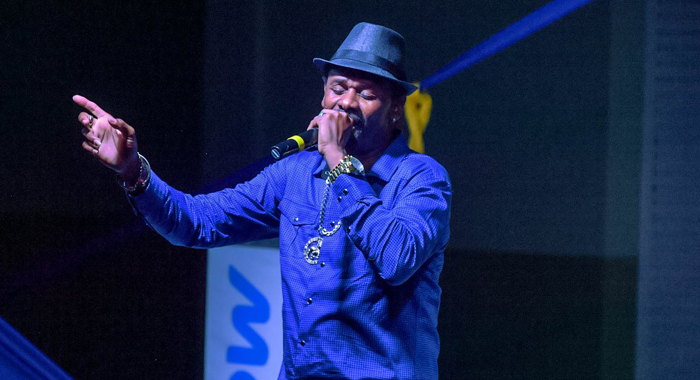 Soca artiste Rondy “Luta’ Mc Intosh, who will take up post as St. Vincent and the Grenadines (SVG) Consul General to New York on Monday, says he was “destined for this” and gave his view on his qualifications for the post.

“I think I was destined for this and I going tell you why I feel this way,” he said on radio on Sunday on a programme on which Prime Minister Ralph Gonsalves, who is minister of foreign affairs, was also a guest.

“Now, from what came out of this whole conversation after the news broke that I was going to be the consul general, it instantly taught me that most people know Luta but very little know Rondy Mc Intosh,”he said, referring to his stage name and his legal name.

“They know Luta on stage with one pants foot pulled up, waving a rag, wining, but very little know Rondy Mc Intosh.”

Mc Intosh said that for his entire adult life he was very passionate and music was his “love and forte.

“So that is the image I pushed to the world. So what I did in the background with my other professional careers and also my studies, I have never, never pushed that in anyone’s face because that is not the image I want to project,” Mc Intosh said in WE FM.

Luta, who has no known or disclosed diplomatic or foreign service experience or training, will replace Howie Prince, as the SVG consul general to New York on Aug. 1.

The appointment has generated much discussion after iWitness News broke the news on July 11.

“I am from very humble beginnings in Calliaqua. My mother left after some issues with six children and moved on her own with a job paying a meagre salary– a nursing aid at the Luis Punnet Home — and she was able to send who she can send to school,” Mc Intosh said.

He went on to tell a story about taking two buttered bread for lunch on a day that he had a final exam while a student at St. Martins Secondary School.

“I am just showing you the reality of where I came from. … so this morning I am presenting myself. It is only fair that I present Rondy because everybody knows Luta,” Mc Intosh said.

He said he graduated from St. Martin’s Secondary School in 1988.

“I always say I wish at that time I had a leader and prime minister like Comrade, where scholarships are flinging left, right and centre to poor people’s children. That was not the reality in my time.”

Mc Intosh said that his mother could not afford to send him to university and he began to do odd jobs and, later, barbering.

In 1994, he joined the band Signal and in 1996 he met his wife, Simone, who was working at a bank. Through her, he was able to get a loan to start his studies.

Mc Intosh said he did sales and marketing and “did so well with distinction” that in October 1998, the head of Cambridge College in the United Kingdom came to St. Vincent and called to make sure he was in the country so as to present the diploma to him personally.

“There is a lot of talk out there about qualification, something I don’t push.  I did, through the Caribbean Institute of Technology, studies on Microsoft. I mentioned sales management and marketing through Cambridge College,” Mc Intosh said.

He said that before he joined Cable and Wireless in 2001, the company would send its staff to England to study, but that became too expensive, so they opened a college in St. Lucia.

“… and I went there to study account management, advanced communication and so many more things I did there at the college there.”

Mc Intosh said that in January 2008, while working at Cable and Wireless, BlackBerry was the most popular mobile device.

“They sent me to Miami to train. I became a certified BlackBerry enterprise person. Probably I was the only one here in St. Vincent and I went to Miami twice to train.

“In October of 2005, I did protocol and business etiquette through Rene and Associates. In 2008, I did project management with dynamic scheduling and in 2012, I did performance management at the UWI open Campus here in St. Vincent.

“And that is just a few, because I don’t want to go off and boast on education and qualification because I always say, let my work speak for me.”

Mc Intosh said that his first official job came in the mid-1990s as a University Distance Teaching Enterprise (UWIDITE) assistant at the University of the West Indies.

He later landed a job as a sales clerk at Courts.

“Within a year and a half, recognising my talents and my skills, I was put to manage the Courts Clearance Centre,” Mc Instosh said.

“Then I was offered a job at Cable and Wireless as an account executive. That was sometime around 2001. From accounts executive, I was given the title of accounts manager and also put to manage the outside sales role.”

He said that in the past, Cable and Wireless never put the same person in both positions but did so with him because of “my skill and my dedication to the work”.

Mc Intosh said there was a time when the accounts were reshuffled and the company put under his care all enterprise customers, meaning those in SVG with regional or international presence,

“And it was done so because they saw the maturity and they way how I performed my job.”

He said that after that stint, the company asked him to manage the government account, the largest that the company has.

“And I think part of the reason being, other than my capabilities, there were some rocky time with Cable and Wireless and the government. Remember one time when all essential services were disconnected and there were rocky times?

“So, I think they were saying, ‘If you put Luta it would kind of soften the blow between the government’ and during that time, was I also put in charge of the Grenadines.”

Mc Intosh said the company did not put “any ordinary” account manager in charge of the Grenadines.

“And when you have to fly down to the Grenadines, to Canouan to speak to Pignataro and Dermot Desmond and those guys, they don’t put any ordinary person to do that.’

‘an illustrious career in music’

Luta said he has also had an illustrious career in music, once becoming manager of Signal.

He said that after 25 years he was able to cop the Road March title, something that is often won when people are fresh.

He said he was named entertainer of the year on three consecutive occasions and in 2012, when he decided to try parang soca, he won the first and second position.

“That is record; that is history,” Luta said, adding that in 2019, he became the first artiste to win the road march and parang title in the same year. S

“So, you can see, in all my careers, everything that I would have done, I rose to the top,” Mc Intosh said.

“I have also been involved in a lot of charity work and this is something I am going to take to New York as well because I see my stint as a continuation of what I’ve been doing here in St. Vincent with an office function to it.”

He said he has worked as a liaison for groups and individuals in North America.

‘I know what the office requires’ — PM

Meanwhile, speaking on the same programme, the prime minister said he has seen Mc Intosh’s CV.

“But those are not the things which persuaded me. I know the man. I interact with him. I know the quality of his mind; I know his analytic ability. I know his outreach. I know his managerial skills. I know what the office requires…”

Gonsalves said that he has not seen a diplomatic appointment generate as much discussion recently.

“The man here, I did the head hunting. I asked other people their views, who would they suggest; I ranged far and wide, including persons inside of the state administration in various positions and I kept coming back to Luta.”

He said that when he was satisfied in his mind, “I called him and asked him if he is interested in doing something like this”.

Gonsalves said that the Cabinet unanimously supported Luta’s appointment to the post.

“And I tell you this, for a person to perform, apart from the training and the sound basic education that Luta had at St. Martin’s, apart from all those things, when you listen to Luta’s compositions and you see his delivery, you see how he organises himself, you say, ‘In that head of that man there is a very good brain.’

“People think you can only do that if you go and use one of the usual matrices, a fella goes and does his first degree, he has a master’s. Well, there will be an indication in a formal sense that the person has some capacity,” Gonsalves said.

“But you can watch and you can make your analysis. And as impressive as everything that he said, I made judgement of my own observations and my interactions and knowing what is required of the particular job”

Gonsalves said he had “absolutely no doubt” that Mc Intosh would do an excellent job.

“And, by the way, if anybody wants to have a judgement, this man has a first-class woman at his side as his wife. And a woman of that quality can make a judgment of a life partner of somebody who is not of similar quality?” the prime minister said.

“So I think, hopefully, this discussion which we have had here today would put to rest a lot of misconceptions that people had, a lot of prejudices that people had and let us just thank God that Luta is among us and he has an opportunity and we wish him well in this opportunity for his own sake, his family and the people of St. Vincent and the Grenadines, including our brothers and sisters in the diaspora.”

10 replies on “‘I think I was destined for this,’ Luta says of diplomatic post”