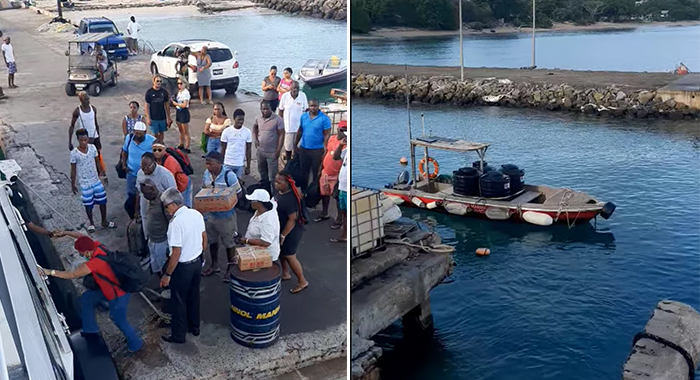 Passengers board a ferry from the condemned wharf in Canoun (left) as the vessel cannot dock alongside the temporary wharf. (Photos: Radio Grenadines)

Leader of the Opposition and Northern Grenadines MP, Godwin Friday and his Southern Grenadines counterpart, Terrance Ollivierre, on Monday, told Parliament that while the government is spending over EC$600 million for a new port in Kingstown, wharfs in the Grenadines are in shambles.

The opposition lawmakers made the point on Monday as Parliament debated a law authorising the government to borrow US$62 million from Taiwan to go towards the US$250 million project.

Friday told Parliament that while the opposition agrees that a new port is needed, only time would tell whether the scope of the one that the government is building is needed for the level of export in the country.

“But, we hope that in the future this can be generated but we have to also think about what we are going to do with port development overall,” the opposition leader said.

Friday noted that there are also ports in other parts of St. Vincent and the Grenadines, adding that the one in Bequia has reached its capacity and needs further expansion.

“The jetty in Mayreau, not to mention the deplorable condition of the jetty in Canouan,” he said, noting that Ollivierre has repeatedly called for its development.

“And Union Island, of course, has long exceeded its capacity, the ferry traffic that is there and the cargo traffic that needs expansion,” Friday said.

“So we have to have an overall view while we are raising funds for port development of how we modernise infrastructure in this country throughout, so that this potential that I spoke of, of Vincentians to provide for themselves, to believe in themselves, to dream bigger, can be realised.”

Leader of the Opposition, Godwin Friday speaking in Parliament on Monday, July 25, 2022.

The opposition leader said that infrastructure is critically important for setting the base for future development.

He said that the opposition has been calling on the government to fix the Ottley Hall Marina or get a private developer to do so, so that the facility can “serve our blue economy, our fishing fleet, our cargo fleet and ones from outside of St. Vincent and the Grenadines, around the region.

“This is one that would seem more urgent now as something that would dovetail well with the plan for development here to have that facility developed,” he said.

Meanwhile, Ollivierre told Parliament, “Now that we focus on port development, I wish to lend my voice to the debate hoping that the Grenadines would be developed to suit what will be happening at Port Kingstown.”

He said that such development is needed across the multi-island nation.

“And as we on this side of the house said that we are in support of the project. So we want nobody to go away with any false notion or ideas,” Ollivierre said, emphasising opposition support for the Kingstown port project and the loan.

Ollivierre noted that Finance Minister Camillo Gonsalves, who piloted the loan authorisation bill, said in his budget addressed in January, “the significant role of the Grenadines in the economic development cannot be understated”.

Ollivierre said that over the last 21 years he has been calling in Parliament calling for the development of the various ports in the Grenadines.

“If we look at the ports in the Southern Grenadines, we’ll notice that most, if not all of them are in a state of disrepair…

“Just this morning, I had to view a video where persons, passengers were trying to get aboard the ferry at the wharf in Canouan and they were having such difficulties … to get on board.”

He noted that the island’s wharf was condemned and replaced with a temporary one that some ferries cannot dock alongside.

“… so they have to use the old one,” Ollivierre said, adding that he was glad when he heard the finance minister speak about intra-SVG port development.”

He noted out that the new Port Kingstown will be developed in three phases, adding,

“And I am hoping that with this project, that everything will come into one and the Grenadines will come along with what is happening.”

He said that for years, the people of Canouan have been complaining about the wharf there.

He said that people have suffered broken limbs and head injuries while using the wharfs in Canouan, resulting in some of them having to seek medical attention overseas.

The opposition MP said that one would not like to be at the Canouan port when it is dry.

“But when it is dry and it is windy, it is like you are in the Arab desert. Dust! When it’s rainy, it’s muddy and people cannot use it as they should and they have to be jumping from puddle to puddle in order to get to use the facilities in a way that is comfortable for them and this cannot be right.”

He said that the Union Island port “has far outlived its usefulness”, adding that if two ferries arrive at the port, one has to remain at sea while the other is docked.

“And that sort of development is not really contributing to the economic development of the people of the islands,” adding that it is difficult for residents to make a living in these circumstances.

Ollivierre said that the ports in the Grenadines lack storage and terminal facilities and this affects inter-regional trade with the Grenadines.

“… and because of that, the boats have to come to mainland St. Vincent then offload at the storage facilities at Kingstown for the smaller ferry boats to take it to the Grenadines…” the opposition lawmaker said.

“We are not against the development of the port on the mainland, but we are saying there should be equity…”

Ollivierre said this is necessary to avoid a situation where St. Vincent appears to be one country and the Grenadines another.

“…  it will come as if you’re living in two countries: one with such glamorous, good facilities and the other one as if to say the people are neglected.”

The MP said proper port facilities in the Grenadines are also important for the tourism sector.

“When the yachties anchor at Canouan, they find such difficulties to go ashore in order to buy supplies and what happens not only tourism suffers, local business people suffer,” he said.

He said that when yachties find it difficult to come ashore in the Grenadines, they visit countries to the north and south of SVG.

“And they are developing economically because of the kind of business that they bring, which the people of the Grenadines don’t get because they don’t have the type of facilities that is warranted for them to benefit from the services that are brought by the people who come to these islands on a regular basis…

“We are talking about economic development, but yet the people of the Grenadines because of their lack of such facilities, the islands are not developing in the way they should.”

He said that shipping containers arrive weekly in Canouan on board ferries from Kingstown but the ports in the Grenadines do not provide for proper movement of these containers.

Ollivierre said the Grenadines are beautiful islands that attract people but lack the infrastructure to facilitate its economic development.

“We need equity. We look at Kingstown, we cannot develop it alone but we also need to look at the Grenadines and bring them along so when people come to St. Vincent and the Grenadines they will be pleased with the product we have not only a Kingstown, but also in the Grenadines, catering to the economic development of the country on a whole,” he said.

Meanwhile, in his contribution to the debate, Prime Minister Ralph Gonsalves said the government also intents to move the Grenadines Wharf from its current location to near the new port toward the western end of Kingstown.

“What we are going to do — and I assure that honourable members who represent the Grenadines — is to link that development with port development in the Grenadines. I don’t have the time to go through Union Island and Canouan which is a special kind of situation but I give this as a general frame,” the prime minister said.

And, in winding up the debate, the Finance Minister, Camillo Gonsalves acknowledged Ollivierre concerns, but said they were not germane to the law being debated.

“The issue raised by the member for the Southern Grenadines are valid issues but I don’t think they are issue that were germane to the passage of a $62 million loan for a Kingstown port so I’m not going to address the Mayreau jetty, important as it is, in the context of this project because it is a separate project,” Gonsalves said.

“So I just want to say that by not commenting on what he said I am not diminishing his contribution but I didn’t think it was necessarily germane to the particular debate we are having,” the finance minister told Parliament.