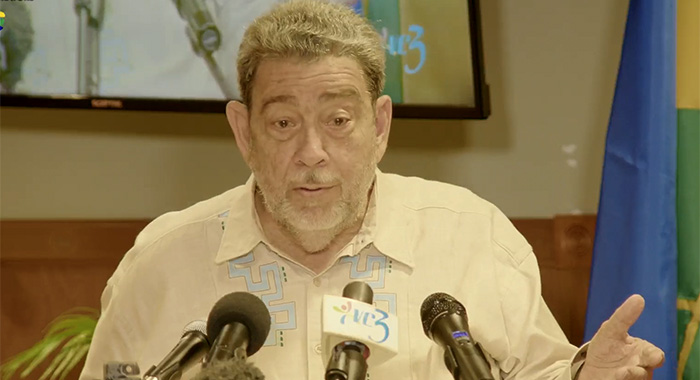 The Government of St. Vincent and the Grenadines says it is now willing to rehire public sector workers who lost their jobs last year after failing to take a COVID-19 vaccine, as required by law.

Prime Minister Ralph Gonsalves made the announcement Thursday, saying that the Cabinet had on Wednesday received the advice from Chief Medical Officer, Dr. Simone Keizer-Beache.

He said that following a briefing from health officials including Medical Officer of Health, Dr. Roger Duncan, the cabinet agreed on a “new regime” which the chambers of Attorney General, Jaundy Martin, will draft into law.

“And clearly they expressed an interest in employment as teachers. Those who had  not followed the requirement and, therefore, had abandoned their jobs under the law, they would be required to follow the conditions, including periodic testing,” the prime minister said.

He said vaccination and booster shots will remain a requirement for existing and new health care workers.

“But there is a principle which is applied called a layered  approach, the police, people at the Port Authority and relevant public servants defined in the regulation, for employment, the vaccine will not be required,” the prime minister said.

Instead, the regime will focus on face masks, hand sanitisation, spacing and ventilation.

“But it will have built in the system the vaccine advocacy programme, still encouraging people to take the vaccine because it is still the best defence,” Gonsalves said.

He said that teachers and other adult staff in learning institutions will have to adhere strictly to a number of measures.

“For unvaccinated teachers and other adult staff, 100% mask, spacing between cohorts, strict cohorting — cohorting meaning if you are in the same — you all stick together,” he said.

He noted that children might mix during breaks but added that there must be strict cohorting during class time.

The prime minister said there must be proper ventilation at education institutions as well as  a testing regime to stay on the job.

He said that the Health Services Subcommittee of the National Emergency Management Organisation (NEMO) would determine the screening regime.

“And in this layered approach, there will be no requirement to be 100% vaccinated. Of course, we are going to encourage the vaccination and hope to get 100%.

“For those persons who …under the regulation had abandoned their jobs by not following the requirement, the new epidemiological situation has occasioned an altered regime,” Gonsalves said.

He said that those persons who are interested in employment “who had chosen to not follow the requirement … they will have to write to the Ministry of Education, they will make the announcement, to indicate whether you want to be employed for the new period and the ministry and the Chief Personnel Office make the announcement as to what period.”

The prime minister said that he suspects that the period would be short, “probably a week or thereabout.

“I am giving an advance notice,  because the truth is this: that we have to staff the schools for the new term and we have to get on with that.”

He said that the cabinet has also agreed that for people who are employed and are unvaccinated, say in teaching, the state will pay for the first four sets of tests.

“Thereafter, it will be your responsibility. But the Health Service Subcommittee of NEMO will set out the testing regime. They are discussing it at the moment,” he said.

Gonsalves suggested that rapid testing could probably be done at schools because it would not be a large number of teachers to be tested.

He said some teachers have said they are not willing to take a COVID-19 test as part of their employment requirement.

“Well, if you are not going to take a test, how can you get employment? Even though the epidemiological situation is less serious now than at the time of the requirement, the making of the requirement, that we are still under a public health emergency and we still have the problem of COVID,” Gonsalves said.

He said the difference is that as of Monday, there were 10 persons hospitalised and two deaths so far this month as a result of COVID-19, compared to five deaths in June.

“So we are not out of the woods yet. But it’s sensible for some amendments to be made to the requirements and they are made within  these terms and the relevant persons responsible, the Chief Personnel Office, and the Ministry of Education the Ministry of Health, etc, will publicise these things.

“And because there is not an automatic reinstatement, the relevant public servants, teachers or the like will have to write to say, ‘We are interested in getting employment.’ And then, I don’t employ people. Employment is done by the relevant constitutional authorities. But I can say what the decision of the cabinet is in relation — having been advised by the Chief Medical Officer as required by law that there are these amendments.”