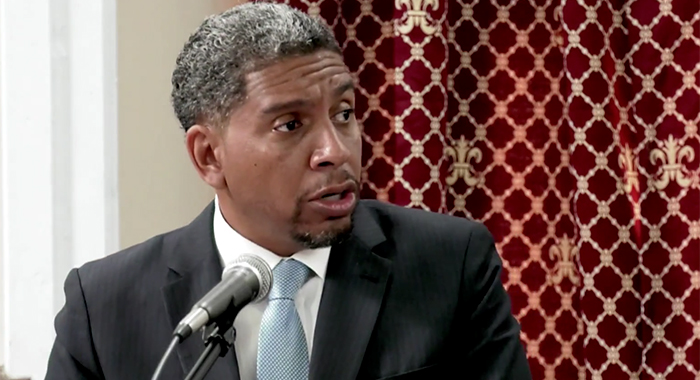 Minister of Finance, Camillo Gonsalves speaking in Parliament on July 25, 2022.

Minister of Finance Camillo Gonsalves, says he “wouldn’t concede”, in the absence of data since 2017, that unemployment rate in St. Vincent and the Grenadines would be considerably higher than 25%.

“No, I wouldn’t concede that because between 2017 and 2019, pre-pandemic, the NIS (National Insurance Services) data show that unemployment was falling, because more people were getting jobs over that period,” Gonsalves told Parliament last week.

He was responding to a question by opposition lawmaker Fitz Bramble, MP for East Kingstown.

Bramble said that the COVID-19 pandemic, the eruption of La Soufriere volcano and the Ukraine-Russia war have all negatively impacted the economy of SVG.

He said that one indicator of economic performance is employment.

The opposition lawmakers asked Gonsalves, who is also minister of economic planning and information technology, what the unemployment rate in SVG-pre COVID (as at the beginning of 2020) and as of June 1, 2022 are, and what the government has done, if anything, to address “this troubling issue of unemployment and what have been the results of those actions during the period mentioned”.

“… at least 1,200 new jobs were created last year in various sectors, and I delineated those in the Budget Speech at the beginning of the year. So there are new jobs created,” Gonsalves said in response to a supplementary question in which Bramble asked if he would say unemployment had increase.

And then there was obviously a massive temporary unemployment phenomenon that took place during the pandemic,” he further stated.

“It is difficult for me to say with any certainty right now where we are in that rehiring process of the people who are temporarily displaced,” the finance minister said.

“I have been following … data from … the hospitality sector, and by doing surveys of the hotels and seeing how many people have been rehired, and we see there’s a trend of rehiring, but I can’t tell you with any honesty that I have a sector-by-sector analysis of the rehiring over the COVID period. And so the data I have is the data I presented,” he said.

The finance minister said that next year the government will begin collecting annual employment data, with the implementation of a US$6 million programme.

He said that in the 2020 fiscal year, the Vincentian economy registered negative economic growth of minus 5.3% as a direct result of the fallout from the COVID 19 pandemic.

The minister said this was the “least bad” in the Eastern Caribbean Currency Union, which had an average contraction of 17%.

He said 5,366 people submitted claims to the NIS to receive unemployment income support and EC$13.7 million was paid out of the Treasury as unemployment benefits over 14 months.

The finance minister said that the official unemployment rate, as reported in the 2017 Labour Force Survey, the last that was done, was 25%.

Gonsalves said that in the absence of annual data, the government uses proxy data, such as GDP performance, and the number of active registered employees contributing to the NIS.

The finance minister noted that not every employed person contributes to the NIS.

“Since 2000, and prior to the COVID pandemic, the number of active employees has risen consistently, with the exception of a flat period and a 5.4% decline between 2011 and 2013, related to the knock on effects of the global economic and financial crisis,” Gonsalves said.

He said that over the last 21 years, the 6.32% decline between 2020 and 2021 is the largest recorded contraction in active employees at the NIS.

“As discussed in the 2022 budget speech, the overall decline of 2,559 active employees represented a situation where a massive swath of pandemic-related unemployment was partially offset by new jobs that were created in other sectors,” he said.

Gonsalves said there were over 1,200 newly created jobs in 2021, and subsequent rehiring of workers who were temporarily laid off during the height of the pandemic.