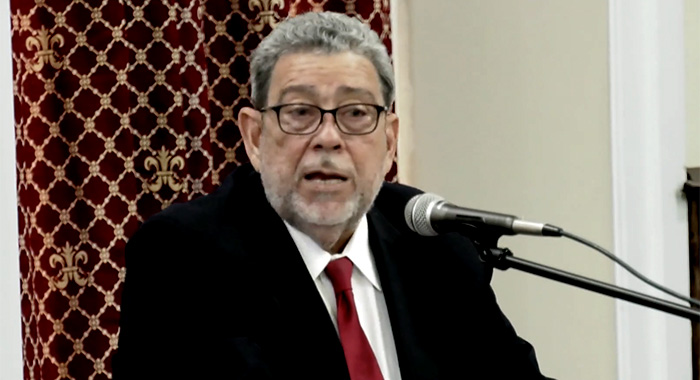 Prime Minister Ralph Gonsalves says that while it is the Public Service Commission’s call he expects that teachers who were fired over the vaccine mandate would be rehired at the same scale, if they reapply to the teaching service.

“Well, the point about it is this, the Public Service Commission they decide that. I would expect it would be basically at the same scale,” he said on NBC Radio on Wednesday, as he urged the dismissed teachers to ignore their union and reapply.

“But let’s take a case of a principal, let’s say principal of school X but that principal job is already filled by somebody, you can’t remove that person and put you in,” Gonsalves said.

“But, certainly, if any jobs going for principal over this period, you can apply and get.

But that is the Public Service Commission would do that,” the prime minister said.

“But I will suspect most of the other positions, that person would be at the same level or so,” he said.

Gonsalves urged teachers and other categories of unvaccinated workers who lost their job over the vaccine mandate to reapply, but noted that vaccination and booster shots remain a requirement for healthcare workers.

“And I’m just asking them and in particular the teachers but others too, asking the teachers to reapply. Don’t pay any attention to trade union bureaucrats who have their jobs and who everything alright with them telling you don’t reapply, don’t seek to get employment again,” Gonsalves said.

The Teachers’ Union and some of its members have sued the government over the dismissal as a result of the mandate and the case is scheduled for trial in late November.

The union said on the weekend that its lawyer, Jomo Thomas, has assured them that they have a strong case against the government.

Teachers who attended a union meeting on Friday decided not to reapply for employment, the union said.

However, Gonsalves urged the teachers to reapply and to follow the protocols, which calls for weekly testing of unvaccinated teachers.

He said that acting Chief Medical Officer, Dr. Roger Duncan had advised the government on the proposal and a press release will be issued on Wednesday.

“Try and get your employment and do the testing in accordance with the testing regime … There’s going to be a release on everything, properly structured. I saw the release yesterday evening before I left the office late, and please apply back to get your job,” Gonsalves said.

“Of course, those who are in the health services have to continue to take the vaccine and the booster so this is an appeal to those who had abandoned their job and in particular to the teachers, whom the teachers union leadership I saw yesterday in the news that one of them said that it’s an insult and teachers mustn’t reapply.

“How could it be an insult if you offer back a job? … I don’t understand that. I’m trying to wrap my head around that logic.”

He said that unvaccinated teachers would have to take a COVID-19 test once a week and can do so at a private or public health care centre.

“… or we are saying that you can buy your kit and go to the classroom and there would be a designated teacher, either the principal, deputy principal or somebody who would certify that you did the test.”

The prime minister reiterated that the state would pay for the first four tests, after which it would become the responsibility of the unvaccinated employee.

“… but we are trying to get tests so that afterwards persons wouldn’t have to pay for that,” he said.

Gonsalves said that some unvaccinated people also do not want to be tested for COVID-19 even as they want to work in the public service.

“Well, that’s a requirement. If you don’t take the test you wouldn’t be re-employed, you wouldn’t get employment. COVID is still with us. It’s only that the epidemiological situation has changed, had altered somewhat, but it’s still with us,” Gonsalves said.

“And you have to wear masks, you have to do the hand sanitising and you gotta do the spacing because that is what other teachers who are vaccinated and families who have children, parents of children going to school, say they want to see, that you still have some measures, and the health authorities have advanced those measures.”

The prime minister said he believes that the government was “being completely reasonable.

“Leh we don’t fight. The union is out of sync with reasonableness and reality. I ain’t going comment on what the teachers’ lawyers say, that is for the lawyers from the government side to talk about, but just to say to the teachers a lot of lawyers’ bread done butter.

“Look out for yourself and your families and look out for the children and I think we’re being reasonable.”

He reiterated that teachers who are rehired would not lose their pension benefits.

“Let me make that point. The teachers’ union don’t listen to me. I say any teacher who is employed who had … abandoned their job, you’d add their previous service with their upcoming service. I’ve made that point clear already,” Gonsalves said.

“Some people saying I’m bending over backwards to accommodate them. I don’t mind bending over backwards; that’s not a sign of weakness that’s a strength. We have to embrace fresh hope. We are in a period of respairing — fresh hope — but everybody has to be reasonable about it. My brothers and sisters, when I come back, I want to hear many of you have applied back for jobs and got back jobs,” said Gonsalves, who he was speaking from the airport, as was about to depart for an official visit to Taiwan.