Proposal to rehire is ‘an insult to teachers,’ union says 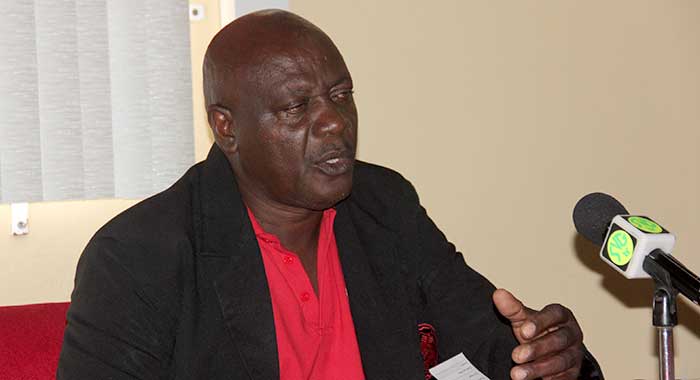 The St. Vincent and the Grenadines Teachers’ Union has rejected the proposal by the government that educators fired as a result of the COVID-19 vaccine last November now apply to be considered for re-hiring.

“There were several recommendations that came out of the meeting. The teachers were clear in what they were saying. There is no way that teachers are going to go for rehiring or reapplying,” Andrew John, the union’s industrial relations and research officer said, on Sunday, reporting on a meeting of union members two days earlier.

“I think it is an insult to teachers. One of the things that I noted and I am still noting is that tomorrow, Aug. 1 is emancipation day from slavery and we are being treated, in this present time, as if we are still with the shackles on our legs,” John said on the union’s programme on Xtreme FM.

“Mind you, you see this thing where they are talking about reapplying for job, it is a sneaky way of discriminating against our teachers … because once people start to reapply, it means that they can accept whomever they wish…” John said.

On Thursday, Gonsalves said that following a briefing from health officials including Chief Medical Officer, Dr. Simone Keizer-Beache and Medical Officer of Health, Dr. Roger Duncan, the cabinet agreed on a “new regime” which the chambers of Attorney General, Jaundy Martin, will draft into law.

He said that regular testing for COVID-19 will be part of the regime for unvaccinated teachers who are rehired.

But John said that teachers “have to appreciate that the government, in this case, is playing a lot of games with workers.

“I think what they are afraid of is admitting point blank that they were wrong. And we have our legal counsel … Jomo Thomas who was present at the meeting and he gave a legal perspective on what will happen if the teachers take what some teachers refer to as a bait.”

John described the proposed testing regime as “nonsense” saying that since the mandate came into effect, some schools had to return to e-learning because of COVID-19 outbreaks.

“Doesn’t that tell you that there was COVID there? Isn’t that what it tells you? And now you are going to say when the vaccinated people come back now, they are going to bring COVID. So what about the people who were there and the school can’t function? If you are testing, everybody you have to be testing… So the condition must apply to all.”

He said that if teachers are “rehired’ rather than “reinstated” it will impact their pension as a person must serve for 33⅓ years to be eligible for a full pension.

John noted that after retirement, a principal gets “merely $3,000” a month, half of their usual income.

“Just imagine you going in now, you are reapplying … and you start back at the bottom, by the time you get to 60, the compulsory retirement age now, let’s say in 10 years, you only would be paid [pension] on that 10 years,” John said.

He said that retired teachers are already at a disadvantage in that the National Insurance Services pension does not come into effect until one reaches age 65.

“Because I can tell you, everybody who is in the service now will not get a pension from the NIS until you are 65,” he said, adding that he retired two years ago and will not receive his NIS pension until he is 65.

“By the time they get to retirement, they are already less than a quarter of what you were getting. It’s starvation you are bringing on these people.”

He noted that while other public sector workers were fired over the mandate and are also being offered the option of being rehired, the focus is on teachers, because they constitute the largest fraction of dismissed workers.

John said that teachers are also seen as “more resilient”.

“I don’t want to disrespect any other group but teachers decided early that they were not going to compromise themselves in terms of their constitutional right, their right to conscience and their health.

“People sometimes, they just don’t focus on the health issues related to this whole matter… People are not looking at the impact that all this is having on the teaching population,” he said, adding that the government continued to put pressure on the teachers “who have been putting in more than yeoman service to build this country.

“But they have to focus on the teachers because you have to remember, too, teachers have been instrumental in putting a lot of them where they are today.”

John noted that the president of the union, Oswald Robinson, has repeatedly pointed out that the union’s constitution says that the union can have an input on matters of national importance.

“Right now, we are at a situation where the teachers have decided that they are going to take action against this thing of rehiring and reapplying and all this nonsense. We are not going to sit down and accept it. It cannot be accepted, and, therefore, we would list some of the recommendations.”

He pointed out that over 70,000 people in SVG have not taken one single dose of a COVID-19 vaccine.

“He just needs to reinstate the people, give them the job and let us continue with the rebuilding of the country that has already been through so much,” John said, adding that the impact that it is having on children cannot be discounted.

John said that at Friday’s meeting, teachers were “standing up and standing firm.

One reply on “Proposal to rehire is ‘an insult to teachers,’ union says ”