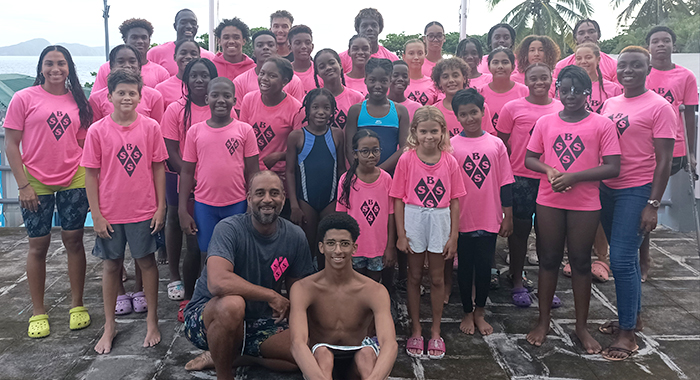 BSSS faced a stiff challenge from Blue Marlins but won with a final score of 1,598 to Blue Marlins’ 1,289 points, the closest result to date.

St Vincent’s para-swimmer Kentreal Kydd set personal best times in his events, which will be recorded as national records, once the newly formed para-swimmer record category is established.

Blue Marlins swept both the boys and girls individual titles in the 8 and under category- Taj Henry claimed the boys title with Tru Matthias placing second and Saj Caesar  third. In the 8 and under girls category, Skylar Byron won the title while her teammates Kmar Rose and J’Nyah Rose placed second and  third.

The sprint challenge in the 8 and under category in the boys division was won by Taj Henry while Skylar Byron took the title in the girls division.

Blue Marlins also did the double in the 9-10 categories. Jadon Hamilton who had a remarkable performance won  the individual  boy’s title and broke two records, the 100 and 200m backstroke.

Hazen Dabriel secured both the boys 11-12 individual title as well as the boys 9-12 sprint challenge title.

Malique Mayers was third overall in the 13-14 boys category. Other swimmers who competed and medalled in the event were Ronyah Jack, Frencille Davis, Jod Baker, Aedryon Sam, and Ezron Quashie.