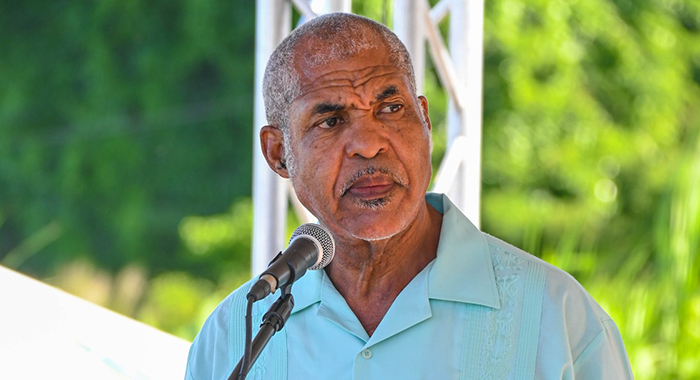 MP for North Windward, Montgomery Daniel at the handing over of the houses in Orange Hill on Thursday, Sept. 1, 2022. (Photo: API/Facebook)

North Windward MP, Montgomery Daniel has lashed out at people who he said described as “matchboxes”, the houses built in Orange Hill for people affected by the 2021 eruption of La Soufriere volcano.

He said that the criticism came from people who may have lived in basements in the United States for up to four decades.

The 27 prefabricated houses were donated by the Sri Sathya Sai Baba Foundation out of Trinidad and Tobago and erected on lands that belonged to the government.

The houses, which are fully furnished, were handed over to 27 families on Thursday.

“I want to say to you that because of our culture, sometimes it’s disheartening,” Daniel told the handing over ceremony, adding that when the houses were being built, “many a passers-by … commented that the houses were too small”.

He said they asked how the government could be putting families in “match boxes”.

“… and some of these passers-by are persons who may have lived in the great United States of America for 30 and 40 years, living in basement and coming to tell us that the government is giving us much boxes, where the fact is that the families are now getting these houses, that the houses are placed on an average 4,000 square foot of land,” Daniel said.

However, some people have noted that many barrels and other supplies were collected, packed and shipped to St. Vincent and the Grenadines from many basement apartments and their occupants in the United States after the eruption and in the years prior.

“And what is more important is that the families have been placed in a safer environment away from floodwaters,” he said, adding that each of the homes is valued more than EC$100,000.

He said this is why at the beginning of his speech he quoted the Bible, saying, “The Lord giveth and the Lord taketh.

He said that in 1979, many people returned to their homes after the eruption of the volcano to find them damaged extensively.

“But I can say to you that persons, families had to face financial institutions to rebuild their homes. But this government has said no to such a policy, this government, we believe in assisting the poor,” Daniel said.

Daniel suggested that his government was the only one in the Caribbean or the world that builds free homes for disaster victims.

“As a matter of fact, I’m aware that one of the greatest countries in the world, with the best economy, that since Hurricane Katrina struck, there are persons who are still in shelter.”

The government is committed to “rebuilding OTR better and stronger than before”, Daniel said, using a colloquialism meaning “over the river”, a term that refers to the area north of the Rabacca Dry River.

The MP, who has ministerial responsibility for transport, works, lands and physical planning, said that when the lands were being surveyed, he ensured that there was an area of 12 to 15 feet near the road to accommodate a sidewalk and a bus shed.

He said he also ensured that there is a recreational facility to the bottom, where the Ministry of Agriculture is responsible for maintaining a green area.

“So, that benches and so on can be put in, where youth can go and even the older ones can go and enjoy themselves on a sunny day,” the minister said, adding that he ensured that a number of physical planning conditions were met.

He said that the Orange Hill housing project would be a model for others across the country.