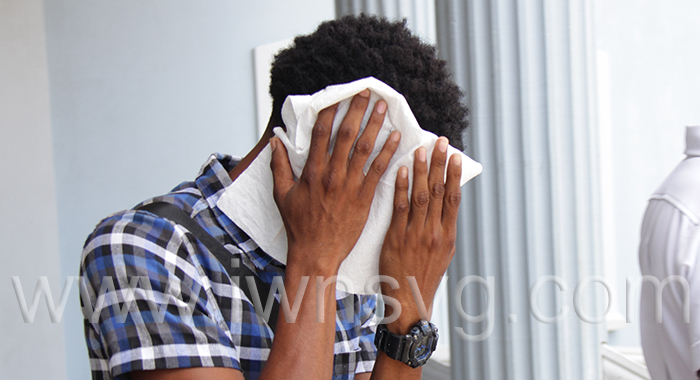 The defendant, Zackerie Latham hides his face as he leaves the Calliaqua Magistrate’s Court on Tuesday, Aug. 30, 2022.

Zackrie Latham, 26, the former police officer charged in connection with the theft of guns and ammunition from the Georgetown Police Station, had a yellowish secretion from his right ear when a doctor saw him at the hospital emergency room.

Dr. Felicia Foye, who was summoned as a witness for the defence, told the trial at the Calliaqua Magistrate’s Court that the secretion could have resulted from trauma to the ear.

She said that the otoscope in the emergency room at Milton Cato Memorial Hospital was not working when she examined Latham, who was in police custody and was brought to the hospital by police officers.

The doctor prescribed antibiotics, issued a fit for prison certificate, and referred Latham to a ear, nose and throat (ENT) specialist.

“I thought the eardrum was burst or had a cut or something there. As we say, maybe it was perforated,” she said during her evidence in chief, as she was questioned by defence counsel, Grant Connell.

“How does one get a perforated eardrum?” the lawyer asked.

“Most of the time it comes from trauma. It would be blunt trauma,” the doctor responded.

Responding to the lawyer’s questions, she said that “visual trauma”, as the lawyer phrased it, would not give a person a perforated eardrum.

Latham was initially charged with 13 counts relating to the alleged burglary but the court upheld no case submissions on 10 of those counts.

He must also mount a defence to the charge that between Jan. 31 and June 17, 2021, at Georgetown, being employed in the government service as a member of the Royal SVG Police Force and being charged with the performance of duties by virtue of his employment, corruptly received property for himself on account of an action done by you in discharge of the duties of his office.

The trial resumed on Tuesday after a three-month adjournment.

On May 17, Connell asked Magistrate Zoila Ellis-Browne to issue summons for Foye, Commissioner of Police Colin John, and, among other witnesses, Assistant Superintendent of Police Adrian Francois.

The defence is alleging that Latham was beaten while in police custody in June 2021.

As the trial resumed on Tuesday, the prosecutor, Crown Counsel Maria Jackson-Richards, reminded the court that the witnesses who were summoned are defence witnesses.

Connell acknowledge this, but noted that they were called under section 99 of the criminal code, adding that this means that he could cross examine them.

In her testimony, Foye told the court that he has been registered as a physician in St. Vincent and the Grenadines since May 2002 and is a medical officer at the Accident and Emergency Ward of MCMH.

She said that on a date that she cannot recall, the hospital requested that she prepare a medical report on her examination of Latham.

“I have my draft with me,” the doctor told the court and Connell made an application for it to be tendered into evidence.

However, the prosecutor objected, saying that the document was not stamped.

Connell, however, countered that what the prosecution was doing was testing the integrity if a registered medical practitioner.

However, Jackson-Richards said that while she was not saying that the doctor did not prepare the document, it was a draft, written on foolscap paper, with no letterhead, or stamp.

She said that based on the Evidence Act, a medical expert’s documentation can be given in evidence.

“I have no objection,” she said, and the document was tendered.

Foye told the court that according to the discharge letter, Latham was to follow up with the ENT specialist on June 22, 2021 at the Male Surgical Ward of MCMH.

She said it was not that she could not “deal with” Latham’s complaint but that the   otoscope at A&E was not working.

Connell questioned Foye about the perforated eardrum that required antibiotics and the prosecution said she could like to know whether that was in the report.

The defence counsel, therefore, asked that the doctor read the entire report.

According to Foye’s report, Latham went to the emergency room complaining of pain and swelling to the jaw, saying that he was attached two days earlier, beaten multiple times and choked.

He said he had lost some consciousness but the timeframe was unknown. Latham also complained of pain to the right side of his chest, which intensified on breathing.

The doctor said he had a yellow secretion at entrance of the right ear, slight redness and a small bruise to that side of the face.

She said she did not ask him where the bruise had come from.

Foye said that Latham’s chest was tender on palpation.

She said he assessment was that Latham has suffered trauma to the body. He underwent an x-ray to examine his chest.

“I don’t think he required a CT scan or MRI. An x-ray would have told us the nature of the injury,” she said, but admitted that an MRI is more detailed.

The doctor said no was fractured noted.

Responding to defence counsel’s questions, Foye said that most of the time when someone is struck in the head, an x-ray would suffice to determine the extent of the injury, especially if there is no cranial fracture.

She said that when someone suffers injury of the type that Latham presented with, they would feel pain for up to a day after.

“But he was complaining about pain and hence he was referred to ENT,” she said.

She told the court that police officers were in the room when she examined Latham, but she could not recall whether they had presented her with any report of medical injury forms to fill out.

During cross examination, Foye said that she thought that Latham’s eardrum was perforated because if the yellow secretion.

She said that if the eardrum is perforated, there might be blood or reddish substance in the outer ear.

“Any bloody residue might not have come out. It might be in the middle of the ear. If it did come out, it is likely that there would be some bloody residue,” the doctor said.

Foye said she could not say for certain that Latham’s eardrum was indeed burst or perforated.

She said an infection in the ear could result in yellow secretion, but wax would not result in the type of secretion that she saw in Latham’s ear.

The doctor said that if someone Latham’s complexion is struck in the stomach with a hard objection, one is likely to see swelling and discoloration of the skin two days later.

She said the only discoloration she saw on the defendant was on the side of the face, as described in the report.

The doctor said that once a patient’s illness is “not life threatening at the moment that I saw the patient”, she would deem them fit to return to police custody to be incarcerated.

She, however, said that if a patient jaw is broken — as the prosecutor suggested — she would refer the patient to the facial doctor for admission to the ward.

Foye said she did not see that necessary in Latham’s case.

During re-examination by Connell, the doctor said that the tenderness to Latham’s chest was unlikely to become life threatening.

“… I saw the patient two days after the injury occurred. The patient didn’t have any blurry vision or dizziness.”

The trial continues on Nov. 8.