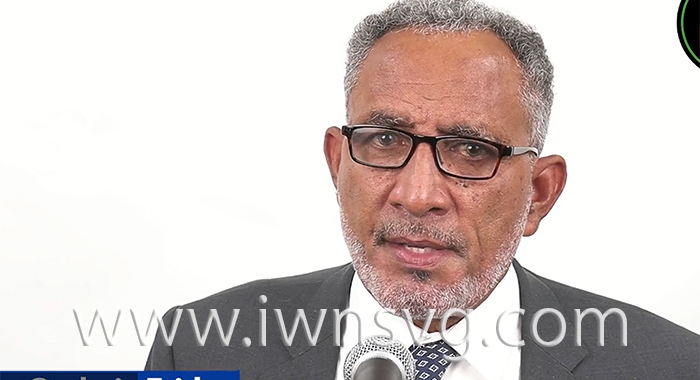 Two decades after the Unity Labour Party came to power promising to be tough on crime and its causes, it seems that crime is tough on the country and has beaten the government into submission.

“When the ULP came to office, they said they will be tough on crime and the causes of crime. It seems like crime is tough on us and it has beaten them into submission because they don’t seem to have no solution or any stomach to even think of a solution nowadays,” Opposition Leader Godwin Friday said on Monday.

He was speaking after a weekend in which two men were shot and killed and two other injured in three shooting incidents across the country, bringing the homicide count to 30 this year.

The opposition leader said the homicide situationcreates “a lot of unease, concern, fear within our community.

“That you’re in a lime and somebody comes by looking for somebody and doesn’t seem to care what the collateral damage is. But any kind of shooting that takes place in our communities in our country is a serious matter.”

He said that gun violence is a serious matter that is becoming so everyday, that is it no longer a lead story in the media on Monday.

“… on a Monday morning, seems to be the weekend activity is hearing where and when, and what circumstances there is some shooting incident where people are injured or killed.”

The opposition leader said that the police have “an obligation to deal with this matter seriously and to say to the people, ‘we are as concerned as you are. In fact, more so because it’s our job to find the causes and the perpetrators and look for solutions as to how we are going to address this question.’”

St. Vincent and the Grenadines cannot accept such violence and the 30 homicides by the beginning of the ninth month of the year.

“We think of Precious Williams,” he said of the 17-year-old Sion Hill girl, whose body was found in a bag in Richmond Hill in May.

“We think of Keisha Small,” the opposition leader further said, referring to the woman whose body was found in Arnos Vale last month, with a piece of pipe perturbing from her vagina.

“We think of the threat and the fear that women must feel in this country and do feel unsafe, because you’re not hearing from the authorities, the people who should have this matter in hand and to give the assurance that they are dealing with this as a serious matter.

“You can’t throw in the towel and just simply say that people have a fascination with guns, that they’re seeing these things on social media. So what are we supposed to do? Social media ain’t going away. Guns are not going away. So are we saying that this is how it’s going to be? This is a new normal? That is not policing.”

On Sunday, Prime Minister Ralph Gonsalves made a passing reference to the latest killings as he spoke on radio.

“I wake up this morning with a telephone call from the Commissioner of Police giving me the usual morning security report that two young men got shot and killed,” Gonsalves said.

“There’s so many opportunities for young people. They have to just — this obsession with guns and following some bad company and some — all this violence they see on social media and the like,” Gonsalves, who is also minister of national security, further stated.

But Friday said the police and the entire security apparatus in the country, including the minister of national security, “have to give that assurance to people that we understand the situation that is happening in the country, we see what you see in terms of the far-too-frequent shootings in communities, the risk they pose to individuals, to their lives, and to their lifestyle, the way in which we enjoy our community here in St. Vincent and the Grenadines and that we have a plan to deal with it.”

He said that the government has no plan.

“There’s no response that says that the authorities are dealing with this situation of growing violent crime, especially shootings in the country. We understand that things will happen, there will be crime, there will be incidents, but you need to give assurance that you know how to deal with the situation and that you are in fact dealing with it, that you’re not throwing in the towel.”

The opposition leader said the absence of comment from the government “seems to suggest that this is something we just have to get used to.

The opposition leader said he is sure that police are investigating the killings.

“But they gotta come to the people as well and give them the assurance that they are, in fact, dealing with the matter to build that confidence in our community.”

He said people are expressing their fears and concerns, as they should do.

“And nothing in terms of a response from the government that indicates that they understand that feeling that they treat it as a priority, and that they have a plan to address it. None!

“That is unsatisfactory, it’s a failure of governance that you could enjoy some time with your family, with friends; socialise. It shouldn’t be that we ask ourselves where the next incident will be and whether the place in which I hang out is safe or not.”

For the second time in a week, the opposition leader said the commissioner of police has to take the matter in hands and reassure the public that the police know what they’re doing and are treating the matter seriously.

He said the police also have to reassure the public that they can control the situation and have a handle on it.

“It is a problem that is solvable; we’re not saying that there won’t be crimes,” Friday said.

“But the point is, where we have a situation year to year, this is going up and up and up and we seem to be accepting 25 and then 35 and then 45 [homicides annually],” Friday said.

“And then when is it going to be a situation where we say this is intolerable? That we have a problem that we need to address? Well, let’s say that time has long passed.

“And the government has to respond in a way that shows the people that they take it seriously and build public confidence in our police and crime-fighting machinery, the security apparatus of our country. That is not the situation that pertains now.”