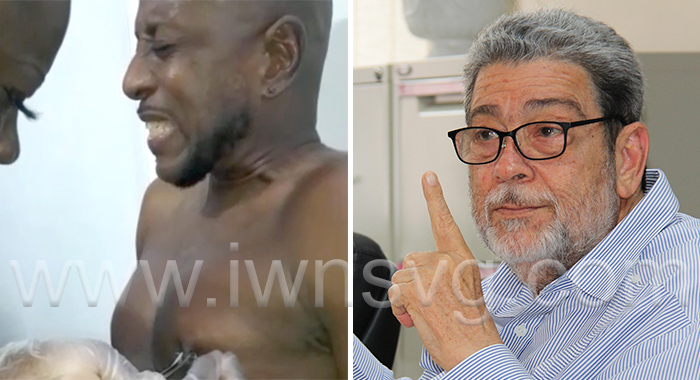 Prime Minister Ralph Gonsalves, on Wednesday, spent 10 minutes commenting on an opposition MP’s nipple piercings, but made a two-minute passing reference to the gun violence that left two dead and two injured on the weekend.

For a second time since Sunday, Gonsalves, who is also Minister of National Security, made a passing reference to the violence, which took the homicide count to 30 this year.

In his weekly appearance on NBC Radio, the prime minister referred to the violence as he commented on the International Monetary Fund’s favourable review of the Vincentian economy.

“I think, from what I’ve been saying that the public will get a sense that what we’re doing in this government is that not only do we have a clear path to where we’re going on all the essential questions but we are actually doing the work,” Gonsalves said.

He said that when the country was “in the valley with COVID and the volcanic eruption”, the government was working steadily “to come out from the valley and climb up along the mountainside as we seek sustainably to reach the mountain top”.

The prime minister said that the country has to work hard and smart, with everyone pulling their weight.

“… and a section of the young males in our country who have a fascination with firearms, with guns, everybody has to make sure that they take advantage of the many opportunities which are available. You have to develop a skill,” Gonsalves said.

“The gun is going to lead you to one place: the cemetery. It may not be today, it may not be tomorrow, but as sure as the sun rises, it going be day after tomorrow,” the prime minister said.

He said that parents, schools, churches, communities, the police, the law courts, the social safety net systems, sports, and culture have a role to play.

“And, there is more than an abundance of it and some of the persons who are getting involved, some of the young males are intelligent persons and by far most of them are not hand-to-mouth,” the prime minister said.

He, however, said that they are affected by “all kinds of influences, including what they’re seeing on YouTube and some nonsense started which you get from some opposition politicians and some crazies”.

Towards the end of the programme, the prime minister turned his attention to the explanation that MP for East Kingstown, Fitz-Gerald Bramble, gave in a video on Sunday for piercing his nipples.

A video that began to circulate on social media on Friday showed Bramble, a member of the New Democratic Party (NDP), swearing repeatedly as one of his nipples was pierced.

In a video on Sunday, the opposition MP said that the video was made two years ago, before he became a lawmaker, and apologised for the foul language.

Bramble said he has had tattoos and piercings for years and it is something that “our African forefathers have done with pride throughout our history, for various reasons, including depicting strength and virility”.

Gonsalves said he did not want to and was not going to say anything about the video.

“… then I saw him very discomforted, he was in a state of discomfiture, saying he coming talk about it publicly. They must have been hammering him inside of his party. And in fact some of the NDP people publicly have been hammering him, social media on radio and the like. So he came on very discomforted, you can see his discomfiture and then he proceeded to be demagogic,” the prime minister said.

The prime minister said that from his reading on the anthropology of Africa, “you don’t have nipple piercing among African men.

“You must cut out this kind of demographic nonsense. Just cut it out about masculinity and strength and Africanness. It is pure rubbish. Which tribe Bramble belongs to where the men piercing their nipples?”

Gonsalves said that if one reads up on and wants to justify nipple piercings, they could do so on the basis of style.

“…  if you want to justify it on the basis that and anybody reads up as any sexual stimulation. But don’t come and justify it and to be telling young people and to telling the males of this country that to exhibit strength and masculinity and Africanness you have to pierce your nipple. Come on man! I mean, it’s just pure demagogic idiocy to justify it in those terms.”

Gonsalves said that his answer is to quote the Algerian French novelist, Albert Camus who said, “Style, like fine silk, often hides eczema.”

“As I said, I didn’t want to talk about this but don’t come on and tell young people that piercing your nipple is a mark of masculinity and strength and Africanness. Come on! The traditions in Africa have been related to piercing of ears and piercing of nostrils and that sort of a thing. People can read up on it and see.”

Gonsalves said he lived in Uganda for a year and has travelled to several African countries.

“… and apart from while living there, I have studied the African civilisation. And don’t come in our Caribbean civilisation to tell young males, ‘Well, hear this nuh, you see this thing? I do this thing to exhibit my strength, my masculinity, my Africanness.’ Good Lord!

“What he wants to do himself it’s not my concern. But don’t come and say that to encourage young people, young males to do this sort of thing. And then when you do that, I will speak out like how I just spoke out.”

The prime minister said he was not commenting on what Bramble wants “to do himself.

“Other but people have commented on that; I’m not going there.  I wasn’t going to go there. Just leave that and let people make up their own mind. But don’t come and justify it. Do not come and justify it on the grounds of male strength or masculinity or Africanness.”

He apologised for ending his presentation on the topic, saying, “What a man want do he wants to do but don’t come and glamorise it and try and justify these things and in the process, try to encourage young males in St. Vincent and the Grenadines…”