The judge said it was unfortunate that when confronted with the crises, the defendant could only see a resort to violence. 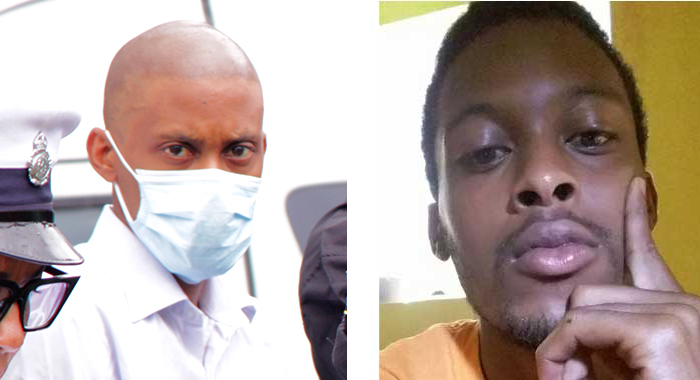 Desron Bristol Roberts on his way to court on June 27, 2022, left, and in an undated Facebook photo.

A High Court judge has sentenced a 26-year-old man who murdered a woman he wrongly thought had infected him with HIV to a further 17 years, five months and 11 days in prison.

The three years, 10 months and 19 days that Desron Roberts, of Cane End, spent in prison awaiting the conclusion of his matter, took the total sentence to 21 years and 4 months.

At his arraignment on Oct. 22, 2020, Robert pleaded not guilty a charge that between Oct. 24 and 27, at Mesopotamia, he murdered Rhodesia Rochelle Bailey.

The court ordered that he undergo a psychiatric evaluation.

The evaluation found that he was fit to plead and Roberts pleaded guilty on June 27, 2022.

The facts of the case, as presented by Justice Brian Cottle at High Court No. 1, in Kingstown, on Friday, are that Roberts, who was then 22, shared a sexual relationship with Bailey, 30, whose house he frequented.

On July 16, 2018, Bailey told Roberts that she was HIV positive and two days later, he went to see a doctor, who advised him to take a post-exposure treatment for HIV and to get tested.

Roberts began the course of medication, but did not adhere to the prescription fully as he felt that some of the side effects of the medication were too harsh.

He had bouts of depression and contemplated suicide but was afraid  to speak to anyone about his problem for fear of the reaction that he would face.

Nonetheless, he continued the sexual relationship with Bailey and in October 2018, decided that he would kill her, wrongly thinking that she had infected him with HIV.

On Oct. 25, 2018, he took a knife with him to Bailey’s house. As she was lying wearing only her underwear, Roberts told her that he had come to kill her.

Bailey told Roberts that she was not afraid to die and he put the knife down and began to strangle her.

Bailey attempted to reach for the knife but was unsuccessful and Robert continued to try to strangle her.

Unsatisfied with his attempts to end Bailey’s life that way, Robert took up the knife and began to stab Bailey, who held on to him begging for her life.

Roberts stabbed her multiple times before releasing her. Bailey ran from the house but collapsed nearby.

Robert went to his home and a passing villager found Bailey’s body early the following morning.

A post mortem found that she died of multiple stab wounds.

Some days later, police arrest Roberts, who told them what he had done.

He took them back to the scene and showed them the route he had taken to leave the house.

The police conducted an electronically-recorded interview with Roberts in the presence of a justice of the peace.

Robert repeated his confession during an electronic interview police conducted with him in the presence of a justice of the peace.

The judge noted the aims of criminal punishment, namely retribution, deterrence, prevention, rehabilitation and that the court must follow the sentencing guidelines, unless they lead to injustice in a particular case.

Justice Cottle said he saw no need to depart from the guidelines in Roberts’ case.

He further pointed out that the court can impose on an adult convicted of murder, a sentence of death, a whole life sentence or a determinate sentence.

Where an offender is found to be insane or suffering mental illness, they can be detained at the court’s pleasure, the judge further said.

He said there was a significant degree of premeditation involved in the killing, noting that Roberts took the knife with him to the scene and told the victim that he had come to kill her.

He tried to strangle her and this would have caused her some degree of prolonged suffering, Justice Cottle said, adding that this cause the court to conclude that the case could merit a whole life sentence.

He, however, said that the sentencing guideline allow the court to fix a starting point of 40 years, where a whole life sentence is not merited.

Justice Cottle noted that the prosecution had said that Roberts would otherwise face a whole life sentence but for his guilty plea.

He said that if the court took this route, the guideline say that no further discount for a guilty plea should be applied.

He said the court was satisfied that the offence does not merit a whole life sentence.

The judge said he chose a starting point of 40 years rather that a whole life sentence because of the youthful age of the offender and his previously clean record.

Cottle said the social inquiry report said that Roberts grew up without the guidance of his parent and was abused by a guardian.

He dropped out of school in Form 3.

The judge said that he found that Roberts did not have the coping skills or social support network to help him to deal with the consequences of having contracted HIV and the associated social stigma.

The judge said it was unfortunate that when confronted with the crises, Roberts could only see a resort to violence. He, however, said he did not see Roberts as likely to reoffend.

He said the aggravating features of the offence are that there was a significant degree of planning and premeditation and the crime was committed at the victim’s home.

Additionally, Roberts first tried to strangle Bailey before stabbing her multiple times, even as there was no provocation that could have resulted in Roberts suffering a temporary lost of self-control.

Mitigating of the offence was the fact that Roberts gave significant assistance to the police.

The judge found no aggravating feature of the offender, adding that mitigating was his age, the absence of previous convictions and that he remains a good candidate for rehabilitation.

He further noted that the offence occurred against the backdrop of the mistaken belief by Roberts that he had contacted HIV from the victim.

The judge concluded that the mitigating featured outweighed the aggravating one and reduced the sentence by eight years.

He granted Roberts a full one-third discount on his sentence for the early guilty plea, which brought the notional sentence to 21 years and 4 month.