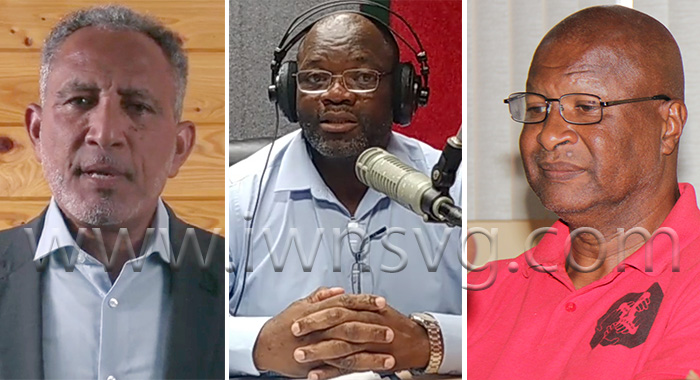 Minister of Primary and Secondary Education, Curtis King says Opposition Leader Godwin Friday is “striving for relevance where the education system is concerned”.

He had further accused President of the Teachers’ Union Oswald Robinson of engaging in “nit-picking” as part of a “nefarious agenda”, which, he said, involved the union and the opposition.

The minister, speaking on his party’s radio station Thursday night, responded to a national address the previous day by the Opposition Leader and President of the New Democratic Party (NDP), Godwin Friday on education in St. Vincent and the Grenadines.

It was Friday’s second address on a national issue in as many months.

“… I want to expose their nefarious agenda that was thwarted,” King said, adding that he wanted to address the issue of leadership, which Friday raised.

“Now, the opposition in this country — the opposition NDP — and the leadership of the Teachers’ Union, and to some extent, the Public Service Union, they have been trying to promote a narrative that says that there is a gaping hole in the education system, in St. Vincent and Grenadines,” King said.

He said “they” tried to engage him “with that sort of narrative” when he was on a radio programme the week before school reopened.

“I stood firm and responded and showed why that narrative was false,” King said.

He was referring to his appearance on WE FM’s Issue at Hand, on Aug. 28, when one of the moderators cut off callers, including the Teachers’ Union’s Industrial Relations and Research Officer, Andrew John, accusing them of being disrespectful to the minister.

“Ever since, it would seem that they have put down the education system as a target.”

He said that before the opening of school, Robinson “said and promised that they are going to have drastic action in St. Vincent and the Grenadines”.

The education minister said the government wanted to find out what this “drastic action” would be.

“It didn’t take us long to figure out what was their mission.”

King said that the Sept. 5 reopening of school “had special significance because we were coming out of a period of serious impact on our … entire system, including the education system” following the COVID-19 pandemic and the eruption of La Soufriere volcano in April 2021.

He noted that the Teachers’ Union opposed the COVID-19 vaccine mandate.

The mandate resulted in hundreds of workers, including 212 teachers, losing their jobs for not taking a COVID-19 jab by last December.

“And, for a while, the unions basically failed to generate the sort of impact they wanted out of the situation,” King said.

“And, with the reopening of schools scheduled for Sept. 5, we thought it was an opportune time for them to organise in such a manner to be disruptive. And, of course, they had the backing of the New Democratic Party. But I shouldn’t even say they had the backing because I don’t know who was leading. I would say they were both in sync with regards to that policy.”

He said that the government also knew that the union, “after its announcement about drastic action”, had planned a protest for the second week of the new school year “and as is now revealed, that was to be followed by a national address by the Leader of the Opposition.

“… The idea was let us ensure — that is on the part of the opposition and the leadership of the Teachers’ Union — … that school is not reopen on Sept. 5.

“So that had school not been reopened on Sept. 5, they would have been in a position to sow seeds of discord and to promote dissatisfaction among citizens of the country,” King said, adding that school is an extremely important exercise that involves almost every aspect of the society.

“So, … if you’re successful in ensuring that school is not reopen, the ground now becomes fertile for you to sow seeds of disruption and also to give an opportunity for greater buy-in of your false narrative of a gaping hole in the education system.”

In his national address Thursday night, the opposition leader said the start of the school year brings its own challenges and uncertainties.

“We accept them and try to meet them as best we can.  What we cannot accept however, is the chaos that too often comes with the opening of school.”

Friday said that on the opening day, many schools were not ready, noting that students at Kingstown Preparatory School were sent back home because the building was still being painted.

“Grammar School could not reopen because the regular school building was still not ready and their temporary plywood school at Arnos Vale had been assigned to another school.”

The opposition leader said that “elsewhere”, there were delays for a day or two and even for the entire week.

“Official confusion now appears to be the norm. This could have been avoided with proper planning.

“This is not the time for unsubstantiated government statements about being ready. The Minister of Education should get his act together and show leadership and competence; our children and teachers deserve better,” Friday said.

King said that while the opposition leader spoke about leadership, “it was the exercise of leadership that thwarted and prevented you all nefarious agenda which was intended to disrupt the opening of school and so create conditions for your protests and national address”.

He further said that Friday’s national address came “two and a half weeks late” as he (King) delivered his on Sept. 5, when school reopened.

“And I smile, because he probably read the minister’s message and we had some half-baked suggestions and proposals; nothing put together and articulated in a manner that could generate confidence that the opposition has a vision for education,” the education minister said of the opposition leader’s proposal to improve the education system and outcome in the country.

King denied that the opening of school was “chaotic”.

“Let me remind persons, in St. Vincent and Grenadines, there are 68 primary schools, 28 secondary schools, 15 state-run early childhood centres. On Sept. 5, all of these facilities, baring two — the St. Vincent Grammar School, which we indicated beforehand would not have been open on the fifth and a private secondary school whose board had indicated also that school would not be ready on the fifth.”

He said that the opposition leader and others “tried to make a big cry and dance” about Kingstown Preparatory School.

“For the records, let me just say, some of the students from that school returned home that day, because they were sent home, because of a certain situation — well known now — on the compound, the school wasn’t closed…”