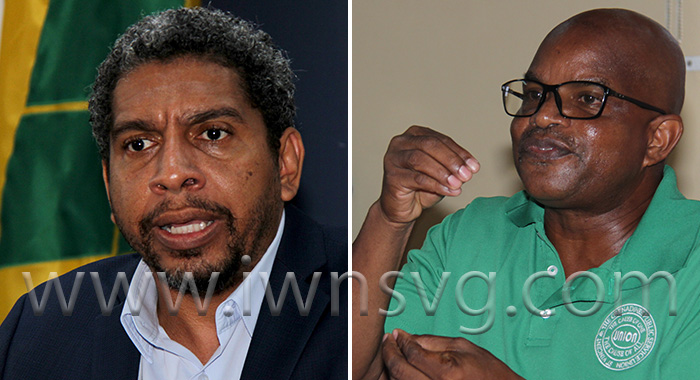 The Public Service Union says the government should give an EC$500 bonus this year to lower-salaried workers whose wages will not be impacted significantly by the salary hike over the next three years.

However, Minister of Finance Camillo Gonsalves has noted that the proposal was not part of recent wage negotiations with the government and the cost has not been assessed.

The unions were also pleased that the government has decided to increase the tax threshold from EC$20,000 to EC$22,000.

“I want to particularly ask the government, there are two brackets of workers, those within the public service … who make less than $22,000 per year that the increase itself is hardly going to touch them. It’s minimal, because they’re not paying taxes already. Their salaries are very small,” Elroy Boucher, president of the PSU, told the media.

“It was our hope that at least the government might’ve been able to give them a bonus or something; something to offset … whatever economic pressures they are on, because they will not benefit as much as all of the other workers who are benefiting. I think that is still possible,” Boucher said.

The union leader, who was not present at the negotiations, said he did not think that Teachers’ Union President Oswald Robinson, who also attended and spoke at the press conference “would have an issue with government, giving those low-level workers a bonus.

“Let’s say, make an independence speech, and announce that, or even Christmas,” Boucher said.

“And I think that is important to them, because we also have to look out for them, even what we have done here, does not give them the sort of benefit that we want it to.”

Finance Minister ‘not closing the door on anything suggested’

However, speaking at a press conference, on Thursday, the finance minister noted that the EC$500 bonus was not part of the proposal that the three labour organisations made to the government.

Gonsalves further said that minimum wage did not form part of the union’s proposal during the recent wage negotiations.

The finance minister said that the prime minister “has his own views.

“I have related it to the prime minister, and I’m doing a costing of that. But there is a danger to tossing off these things that are not part of a negotiation after negotiation has concluded.”

The finance minister said that he had explicitly asked Boucher, Robinson and all the parties involved in the negotiations “that we try to refrain from negotiations over the airwaves”.

Gonsalves said that if the unions have additional proposals, “ours is an open door.

“And we can have those conversations; we can discuss what they cost. But I’m not going to do this sort of parting shot while am on my way out the door. ‘Why you don’t give me ah next money?’ And then I say no, you say yes or something.

“It doesn’t lend to a good negotiating environment. And it doesn’t lend itself to the building of trust going forward with the government and unions.”

The finance minister said he was sure that Boucher’s “heart is in the right place” when he made the proposal.

“But I would think, as I said earlier, I’m into institutions and processes. There’s a process by which we do these things.”

Gonsalves said he is “not closing the door on anything suggested” but said there is a way in which a proposal should be made.

“And I’m not going to negotiate in public with Mr. Boucher about that,” Gonsalves said.