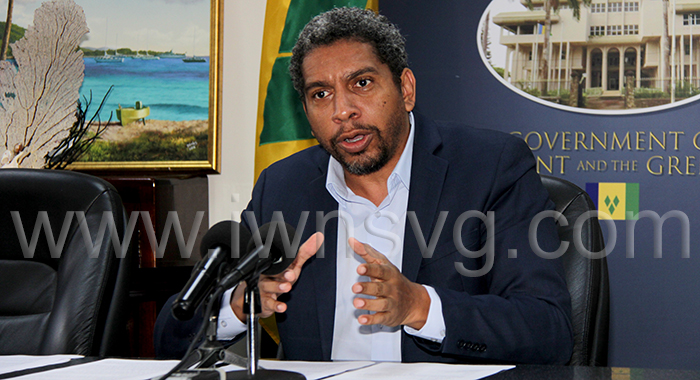 Minister of Finance, Camillo Gonsalves speaking at the press conference in Kingstown on Thursday, Sept. 22, 2022.

Years after abandoning a similar effort, Minister of Finance, Camillo Gonsalves is proposing a national identification card for all Vincentians that is similar to a social security card in the United States.

Gonsalves, who is also minister of economic planning and information technology, said this is necessary as the government moves to create a single window where people can do business online with the government.

“So, there will be one stop, you go to one website — you want to renew your driver’s license, there’s some way you click and they lead you through that,” he told a recent press conference.

He said that people can also use the portal, for example, to renew passports, pay traffic tickets, and hospital bills.

“… and it will all be in a single place that you can go to online instead of going to this line and that line and all the rest of it and you can pay your bills in that way,” the minister said.

“And almost anywhere you go, somebody asks you for your social, and they can type that in and there are a number of things connected to that — your credit history, money that you might owe on your parking tickets and all the rest of it.

“We need that. we need that when you go into the single window, you can type in [a name], but not only type in [a name], type in that number that only you know and that will pull up your hospital bill, your parking ticket, how much you owe for your taxes and all the rest of it.”

‘There is no national ID in St. Vincent’

The minister said he tried this several years ago when he first became minister of information.

“…something called the MPA — the multipurpose ID — and I went out, we had a launch at a Bank of St. Vincent. And the then Leader of the Opposition — it was a year before election — … said I was trying to register 10-year-olds to vote and I was trying to come up with a new voters ID card to change the registration process.

“Because I had said that we’ll start with children, because everybody has to get one. So, we start in schools will give everybody an ID number. But I was accused, at the time, of trying to manipulate the electoral process. And so, our prime minister said, ‘Look, I know you have good intentions, but I don’t want to muddy the waters.’”

The minister said that the project fell through, adding that before he rolls it out this time, he would do “a better job of sensitising people exactly what it is I’m doing when we pass out these ID numbers.

Gonsalves said that to get a national ID card in SVG, one has to reach voting age — 18 –and must be resident in an area for six months.

“And that is another important part of this digital transformation project is the rollout of a single national ID and a number like the American social security number. That is yours only and used as identification.”

However, some people have noted that the current national ID card is inscribed with the words “National Identity Card” and contains a voter’s number that is different from an ID number.