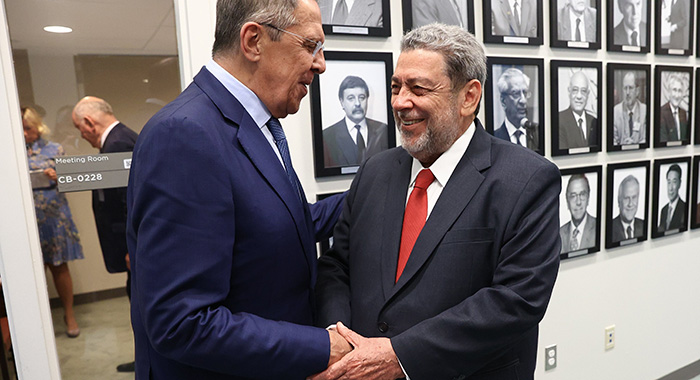 Moscow is offering more university scholarships to Vincentians who want to pursue university degrees in Russia.

Prime Minister Ralph Gonsalves said this was the central bilateral issue among a wide-ranging discussion that he held with Russia Foreign Minister, Sergey Lavrov at the United Nations last month.

In a tweet on its official Twitter account on Sept. 22, Russia’s Minister of Foreign Affairs said that Gonsalves and Lavrov “emphasised their consistent rejection of the practice of using unilateral sanctions that violate international legal standards”.

Gonsalves told a press conference in Kingstown on Tuesday that some Vincentians are pursuing studies in Russia, adding that one of them has returned home.

“Different people react differently to the security issues as they are perceived,” Gonsalves said.

He said that during their discussions, Lavrov explain “basically the position which I know.

“I have read about it. I have read the speeches of President Putin; I have seen interviews by Mr. Lavrov.”

The prime minister said that he kept “emphasising the necessity and desirability for peace and mature diplomacy” amidst the ongoing conflict with Ukraine.

Gonsalves said that if one were to reread the letter he wrote to Putin on Feb. 24 — the first day of the  Russian invasion of Ukraine, “you will see that there is, if I say so myself, there is prescience in the letter”.

He said he had raised in the letter the “very issues” that are unfolding “as they represent dangers to peace, prosperity and security for all.

“And I had made the point, too, that not because other countries, powerful countries, may behave in a hypocritical manner in relation to intervention in other people’s territories that one must now use that hypocrisy as the basis to drive a horse and chariot, metaphorically, through the Charter of the United Nation.”

Gonsalves said he had raised in his letter the question that “things can get out of hand and the doors may be open to the possibility of a nuclear Armageddon.

He said “a series of errors by leaders cascaded into open warfare” after Archduke Ferdinand was killed on the streets of Sarajevo.

“And the peace treaty of Versailles ending the First World War, in a fundamental respect begat the Second World War.

“So, if you are not being parochial — and there are a lot of leaders all over the world, including in St. Vincent and the Grenadines, extremely parochial and don’t have a grasp of the interconnection within the world — many errors can be made and many errors are being made and have been made by persons who are not as thoughtful as they should be.”

He said this can happen even among large and developed countries, as happened at the time of the First World War.

“And I also pointed out that the military action would bring pain and suffering to regions of the world outside of those immediately engaged in the conflict.”

The prime minister said that when he wrote the letter and said he would not make the content known as yet, “people went off on all kinds of different tangent and I often allow people to talk and run their mouths and so on. And when they see it, everybody boiled down bhaji (spinach) — all the critics.

“And you would have seen, as I said, the prescience in that particular communication.”

Gonsalves released the letter to the public on March 2.

One reply on “Russia offering more scholarships to Vincentians”