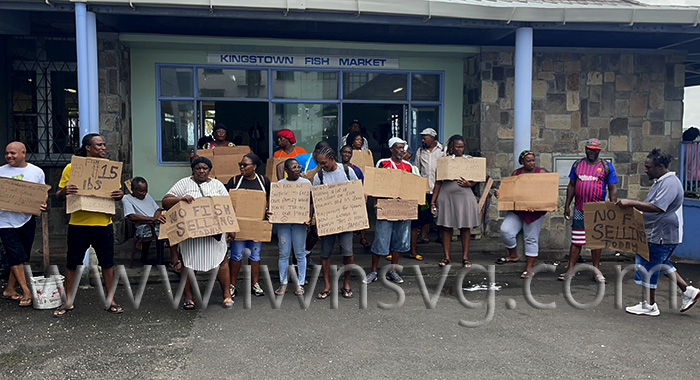 The Kingstown Fish Market, which is managed by the state-owned Agricultural Input Warehouses, loses about EC$30,000 a month, Prime Minister Ralph Gonsalves said Tuesday, as he justified the increased fees imposed on fish vendors.

Vendors at the market entered a third day of protest, on Wednesday, saying that the revised fees would force them to sell fish at EC$15 a pound, up from EC$10, making it unaffordable for poor people.

However, Gonsalves told a press conference in Kingstown, on Tuesday, that the higher vending fees are “not unreasonable” and there is no reason to increase fish prices to EC$15.

He, however, said that the market should consider reducing the landing tolls imposed on seafood.

“The fish market loses money every month. The dance can’t pay for the light,” Gonsalves said, adding that the draft audited accounts indicated that the market lost EC$300,000 last year.

He said there has not been an increase in prices for goods and services at the market for over 10 years.

The fish market has increased the cleaning room fee by 25% daily, moving from EC$15 to EC$20.

“The reason for this is there is an increase in the price of water expenses and cleaning and sanitisation supplies such as chlorine, chlorine tablets, bleach and other detergents,” the prime minister said.

He said that the drains also need to be flushed often because of the increased amount of fish scales, especially those coming from the red fish.

The processing fee, which was EC$75 an hour is now EC$100, “as a result of the increase in electricity due to the operation being done in a temperature-controlled environment”.

Vendors will pay double for water which has moved from 10 cents to 20 cents per gallon “because of increased cost paid by the company for water usage”.

The landing toll for in-shore pelagic fish — like jacks, ballyhoo, robin, sprat and dadger — as well as other demersal — such as crevalle, old wife and snoop — has increased by 50%, moving from 10 cents to 15 cents per pound.

The same increase applies to seine-caught tuna and skipjack.

The landing toll for fish like snapper, hinds and butter fish has also increased by half, moving from 20 cents to 30 cents a pound, as is also the case for off-shore pelagic like dolphin, tuna, skip jack, and king fish.

The storage fee for lobster has increased by one-quarter, from 40 cents to 50 cents per pound daily — the same as for conch.

“The sale for the ice has gone up because the electricity cost has gone up. That is the principal basis,” Gonsalves said.

Some prices have remained unchanged while others have been reduced,

The black fish room rental remains at $10 per person daily. The counter fee remains at

The price of a cutlass file remains at $10 each.

The grey tubs rental has been halved from EC$50 to EC$25, as the fish market has stopped renting out the bins for transportation of fish to the Grenadines.

The prime minister said that the EC$25 is now charged for fishers who rent the bins for overnight use on the compound.

“The purpose is for fishing vessels that return with their catch later than when the market is in operation.”

Gonsalves said that the revised fees will generate EC$75,000 annually.

“You don’t just tell people, ‘Well keep noise if you want’, or words to that effect. You don’t function like that. In fact, I am going to ask them if, on the landing toll, in particular, whether they could reduce the extent here for some of the types of fish. I am not saying it is not reasonable.”