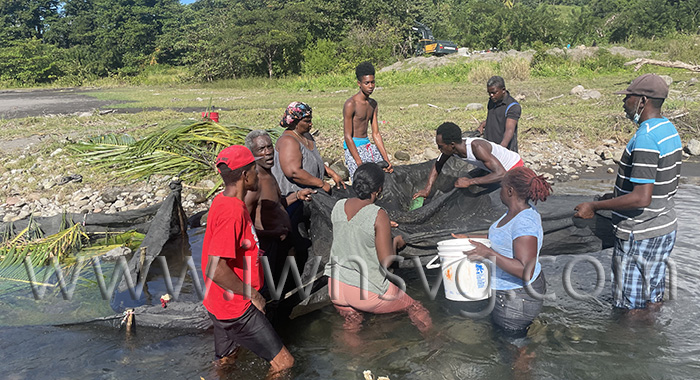 While the quarry that is being set up in Richmond will pay the government EC$12,000 a year for lease of 59 acres of land, tri tri caught in North Leeward generates about EC$120,000 annually.

The study focused on Larikai, an uninhabited area north of Richmond and the government has cited it in justifying granting Rayneau Construction and Industrial Equipment Ltd., a St. Lucian company, a licence to quarry rocks in Richmond for 30 years.

Charles, an educator, said that the study, which was conducted by Reynold Murray, who holds a doctorate in environmental science, further found that in a good year, fishers between Richmond and Cumberland, collectively earn over EC$250,000.

“Multiply that by 30,” Charles said. “So, when all that is taken away, it simply means that the people in North Leeward will become more impoverished than they already are.”

Charles said that politicians “give us the bare minimum and come brag about it as if so much”.

As part of the establishment of the quarry, farmers were compensated for crops under cultivation in the affected area.

Charles said that some farmers “did not even get $500” for their crops. “When the assessors came from agriculture to do the assessment, some of the crops were already destroyed and rotted; they couldn’t get the physical plant to assess.”

“Now when the money is finished, and you have no alternative land to cultivate, what are you going to do? They have no manners for us,” he further said of the government.

“You see the compensation that they give to farmers? It was an afterthought. It was only after people made noise that they came and scrambled something together and gave to the farmers. the land is more valuable to us for agriculture.”

‘How that would make sense?’

Charles said he is opposed to the quarry despite being the biggest supporter of the ruling Unity Labour Party (ULP) in Fitz Hughes.

He said that Parliamentary Representative for North Leeward, Carlos James — a ULP lawmaker who is into his first five-year term, having won the seat by one vote in 2020 — speaks about fisheries in the constituency.

“When the ULP took office, the fish market in Chateaubelair was brand new, mint clean with 700 gallons of gasoline, but because it was built by an NDP (New Democratic Party) government, they leave it to rotten down,” Charles said.

He said that the ULP now wants to rebuild the fisheries complex. “That can’t make sense. How that would make sense?

“And even if it makes sense, when 7.8 million metric tonnes of dirt is moved from there and pollute the sea, where the fish will come from?” he said, referring to the dirt that has to be removed from the headland in order to access the rocks for quarrying.

On Sunday, Rayneau Gajadhar, owner of the mining company, told iWitness News that there is more dirt in the area than first thought and setting up the quarry would take another year.

In January, he said it would have taken six months.

Charles said the manner in which the government went about setting up the quarry was disrespectful of the community.

Some of the farmers found out about the lease when Rayneau’s tractors began bulldozing through their plots on Jan. 29.

“We are saying to the government, you have disrespected us, your actions are disdainful, contemptuous and we are registering that with the world…

“I live in Fitz Hughes, I’m a Vincentian and I have a right to speak and I’m gonna speak. I did not help to elect a government for this mess,” Charles said.

‘How is Chateau a town?’

Charles said he has been involved in groups “trying to lift North Leeward” and was part of the group that built the bus shed in Chateaubelair.

He said he has attended “every consultation” that there has been in North Leeward.

“So, when people like me talk, it’s not because I am trying to deprive somebody of a living. It’s not because I’m trying to take money from somebody’s mouth, but all I’m saying is that North Leeward deserves better and it is time that we stand up and demand better.”

Charles said that this is 43 years since St. Vincent and the Grenadines gained independence but there is no banking service in Chateaubelair — the regional capital.

“How is Chateau a town?” Charles said, and noted that a road in the community is yet to be repaired after it was damaged in 2013.

“The wharf along with Super Dan bridge took ages to complete,” he said, referring to the two pieces of public infrastructure that were completed last year, after years of disrepair.

Charles said the quarry is illegal as it violates a number of local laws as well as international conventions.

He mentioned the Town and Country Planning Act, Public Health Act, Quarry Regulations SR&O 42 of 1952, the Minerals Act of 1987, the Wildlife Protection Act, the National Parks Act, and the Central Water and Sewerage Act.

“So, all those on the side who talk, I have the facts. Argue with the facts; not me,” Charles said.

“The government of St. Vincent and the Grenadines did not take one single act into consideration. Not one!”

“The government totally ignored every single piece of these conventions…

“When I talk, I talk with information and people need to listen … and be informed,” he said, adding that an environmental impact assessment is required for environmentally-sensitive projects or activities.

He said that the UN speaks of provision for community consultation.

“This is where it hurts most. You mean to tell me that we have a project of this size — size meaning 58 acres of land from Cavali Rock to us here — leased to a foreign company for 30 years and you mean to tell me nobody has the common courtesy to come and have a discussion with us, which is one of the recommendations under the United Nations.

“It’s contemptuous. It’s illegal. It’s illegal. … What the government is doing to North Leeward in Richmond is wrong… You want to tell me you have a prime minister with eight other elected members on his side and … none of them can’t say, ‘No, Comrade’?

“We know we have no representation in North Leeward,” Charles said, adding that there has been no community meeting since February and none has taken since work resumed recently.

Charles said that constituents have been “short-changed”.

“Don’t be fooled. We have been short-changed, and my fellow residents and citizens the quarry is illegal. It is wrong. It is contemptuous. It is disrespectful on all levels.”