Selling fish at $15 per pound is unreasonable – PM 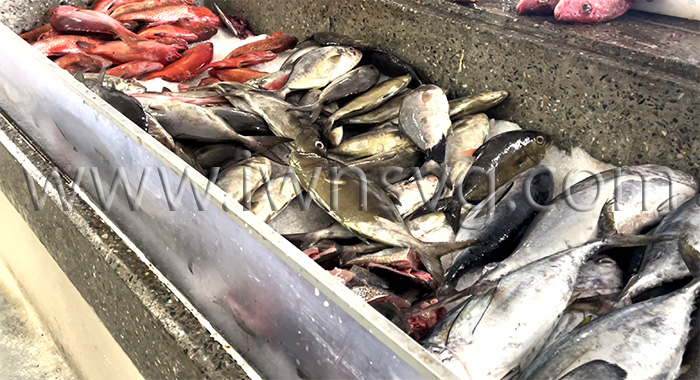 The suggestion by vendors at the Kingstown Fish Market that they would have to sell fish at $15 a pound in response to higher fees is “hyperbole,” says Prime Minister Ralph Gonsalves.

The vendors say that the higher price would be necessary to sustain their businesses, in light of the fees, which, in some instances, have increased by 25% and 50%.

“And now, you want to tell you, you get into hyperbole by saying the fish is $10 a pound and people will have to pay $15?” Gonsalves told a press conference in Kingstown.

“Do any of these numbers indicate that they will have to pay $15 a pound?” he said, after detailing the new rates.

“That’s a 50% jump on an item with a reasonable size base,” the prime minister said, adding, “Everybody must be reasonable.”

Vendors have been protesting since Monday, refusing to use the market’s facilities and services.

They said the new prices will force them to sell fish at a price unaffordable to poor people.

“I just want everybody — you notice I am a man of reasonableness always. But persons who are protesting, I am just asking for them to be reasonable, too,” Gonsalves said.

He, however, said that his view is that the fish market could consider “doing something about” the landing toll, which stands at 15 and 30 cents per pound depending on the species of fish, and 50 cents per pound for lobster and conch.

“But the truth is that increases are not unreasonable in themselves and even with the increases, you are still losing there,” Gonsalves said.

The prime minister said the loss has to be made up somewhere, noting that the central government subsidises fertiliser sold by the AIW.

“… in order to keep the price with the fertiliser, the central movement has to subsidise it. That is to say whom? The taxpayers. Also, let’s not think that this is something coming from the skies. We have to deal with real issues.”

Gonsalves said he has been “watching” the fish market.

“I can understand and overall, with the Input Warehouse, they stand losses of $15,000 a month, but when you’re reaching 25 and 30 [thousand], it starts to squeeze you more because of how things are. So, I want everybody to understand the overall approach, the way in which we in the government address these things.”

He said that the government has offered the fish market for management by other entities.

“… since I am here, people, some business people say they want it. I said come with a proposal. The Chamber of Industry, I said if you think you can do something about it, come. When man and woman examine the thing, man run and woman run.”

The prime minister said the fish market provides a good service that is improving.

He said that towards the end of the last fiscal year, into this fiscal year, the government has spent EC$200,000 to fix up the yard and some things inside the market.