PM said he must respect King Charles despite republican stance 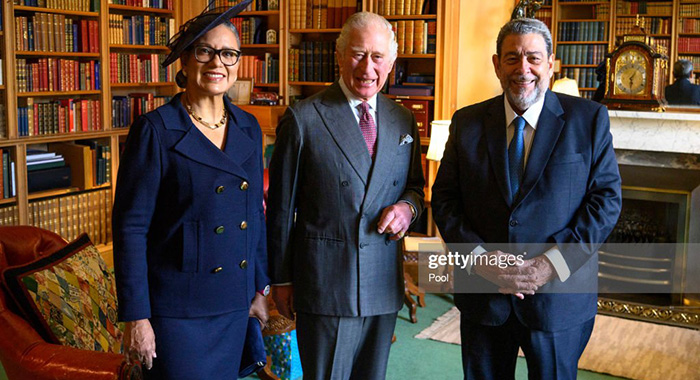 King Charles III poses during an audience with the Prime Minister of St Vincent and the Grenadines, Ralph Gonsalves, and Mrs Eloise Gonsalves, at Balmoral Castle on Oct. 1, 2022 in Balmoral , Aberdeen, Scotland. (Photo by John Linton-Pool/Getty Images)

Prime Minister Ralph Gonsalves says that his opposition to the British monarchy as sovereign of St. Vincent and the Grenadines does not mean that he should disrespect King Charles.

He made the point as he responded, on Tuesday, to opposition lawmaker St. Clair Leacock, who said Gonsalves meeting with the king in Scotland on Saturday showed “barefacedness”.

“I saw a picture with Ralph, and — let me be circumspect — the king in England and I didn’t know who was who,” St. Clair Leacock said Monday on New Times, his party’s programme on NICE Radio.

“Ralph’s presence in England in the weekend to meet the King of England is the highest, most demonstrative level of political fraud ever seen or heard in my lifetime. It will be difficult to see more barefacedness than that,” Leacock said.

However, Gonsalves said that Leacock was engaged in “loose talk”.

“And he gets looser by the day and apparently a long period in opposition has certainly addled his brain,” said Gonsalves, whose Unity Labour Party has been in office for 21 consecutive years.

He said that this does not mean that he must not communicate with the sovereign.

“And I have to have the respect, not because my personal view is that he should have a homegrown, non-executive president. They just simply continue the dishonestly that I want to replace the monarchy with Ralph.”

In a 2009 referendum, Gonsalves’ government failed to convince the electorate to remove the British monarch as head of state in favour of a non-executive president.

Gonsalves reiterated that his government is proposing a non-executive head of state.

Gonsalves said that King Charles has “a very strong and progressive” position on climate change.

“He has had this position on the environment for a long time and when he speaks on this issue, many of the things which he says are in sync with progressive discussion on climate change.”

The prime minister said he could not disclose his discussion with the king, adding that what he was talking about was the king’s known public position.

Gonsalves further noted that the king is the titular head of the Commonwealth, in addition to being king of SVG with the governor general as his representative.

“The Commonwealth is important to him and he has said that publicly and St. Vincent and the Grenadines is a member of the Commonwealth.”

Gonsalves said the Commonwealth — which is composed of 56 countries — has its limitations and possibilities, adding that SVG works through the body on a number of issues touching and concerning governance, technical assistance.

“So not because I am not in favour of a monarchical system, I’m just going to be disrespectful to the king or to the British monarch. That’s imbecilic; it’s infantile.”

He said he also had to thank the king personally for helping to arrange 55 scholarships worth 4.5 million pounds for Vincentians, tenable at the University of Wales Trinity Saint David.

Gonsalves also said he had to thank the king, as patron of the British Red Cross, for the contribution it made to the relief effort during the COVID-19 pandemic.

“So, come on, let us have a discussion which is intelligent. Let us don’t behave in this complete idiotic way,” Gonsalves said.