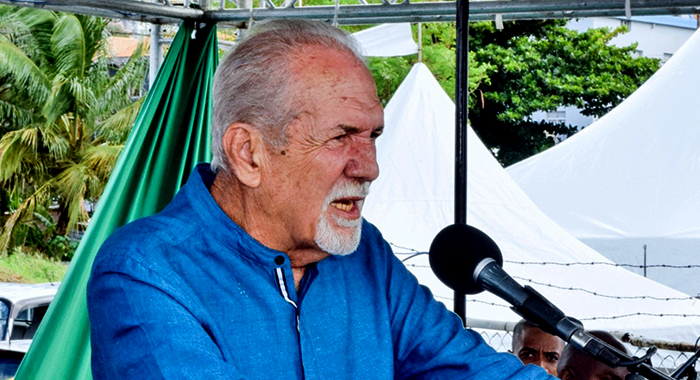 Ten weeks after suffering a stroke, government Senator Julian Francis, 71, is “making the progress to be able to return to work at some time”.

Prime Minister Ralph Gonsalves said he came to that conclusion from speaking with Francis personally.

Gonsalves, 76, has taken over Francis’ urban development, energy, airports, seaports, Grenadines affairs and local government portfolios while he recuperates, after suffering a stroke on July 24.

Francis was taken to Barbados for medical attention then returned to St. Vincent a few weeks later.

Gonsalves told the media last week that Francis is  doing physiotherapy on an ongoing basis and the physiotherapy is “coming along fine”.

The prime minister was speaking on Tuesday, one day after he said he had spoken to the minister, his cousin.

“… he sounded on the phone like the old Julian. Full of chat and reminded me about this and that and, and so forth.

“But  when you get a stroke and you’re doing physiotherapy, you have to get back your strength in your walking. … But, undoubtedly, we all miss him in the government, and I particularly miss him.

“I had to carry his workload in addition to my workload. So it’s the nature of it. In the midst of life, we are in death and illness stalks us. We just have to work with it. And challenges do occur…” Gonsalves said.