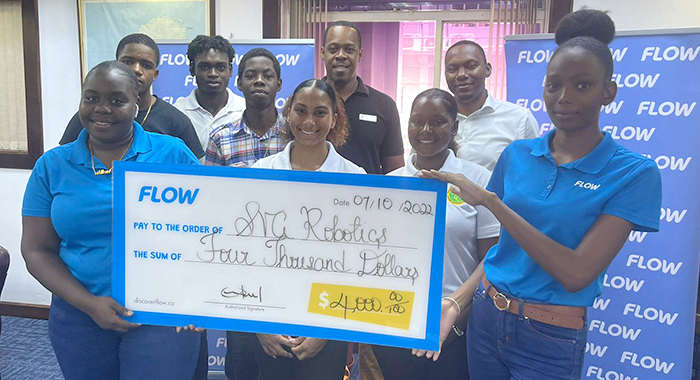 Telecommunications provider FLOW has donated EC$4,000 to the SVG Robotics Team to support them in their travels to Geneva, Switzerland to compete in the 2022 First Global Challenge.

The FIRST Global Challenge is an Olympics-style, international robotics competition in which each country represented must build and program a robot to compete. The competition, which embraces science, technology, engineering, and mathematics (STEM), will give the young team an opportunity to showcase their STEM skills.

Flow Country Manager, Wayne Hull hosted the team at his Halifax Street, Kingstown office and had the opportunity to interact with the tertiary and secondary school students to discuss their plans.

“The team is eager to represent St. Vincent and the Grenadines as they have already captured 1st place in the Caribbean and 32nd globally in a similar competition in 2019,” FLOW said in a press statement.

The competition which will see team SVG compete against 180 other countries through Oct. 16.