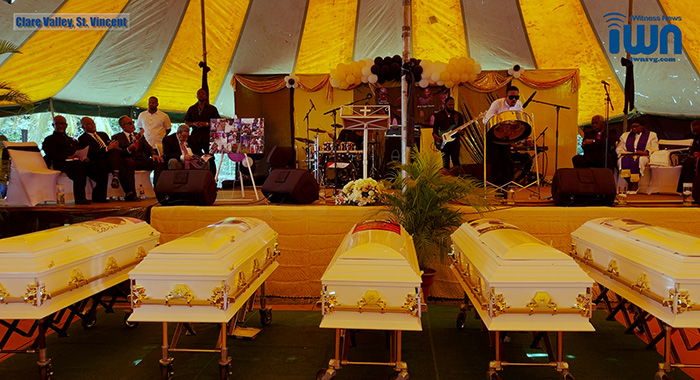 The death of seven Clare Valley young people in a matter of weeks is a wakeup call for the village, a pastor told Sunday’s funeral of five of the dead.

Joseph Brackin, pastor of the Clare Valley Wesleyan Holiness Church, told the funeral of the five men who died in the bus crash at Sandy Bay on Sept. 11 that God is speaking to the community.

He was delivering welcoming remarks at the funeral of Giovanni Enrique “Durh” Barker, 21; Khalil Karl Travis Robin aka “Keno” and “Snackman”, 29; Kenroy Kevin “Pressure” Haywood, 29; Elvis Logie “Billy” Harold, 30; and, Ishmael Dorrel Bruce aka Darrel, 39, who died when the minibus in which they were travelling to a funeral in Owia, crashed in Sandy Bay on Sept. 11.

“In a short while, five young men, another young lady to be buried, another man who got shot — a Clare Valleyian — somewhere overseas,” Brackin said.

He was referring to MacGyver Allick, 31, of Clare Valley, who was shot and killed in Martinique on Sept. 27.

“Can’t you see that God is saying something to us in Clare Valley? This is a wakeup call, my friend. And I trust that God will speak to every one of us. As we listen to the voice of God.”

Sunday’s joint funeral was conducted by the churches in Clare Valley, which represent a number of different denominations, including Seventh-Day Adventist, Spiritual Baptist, and Wesleyan Holiness.

“I also noted that it is an opportunity and probably the plan of God to bring the churches in Clare Valley together,” Brackin said.

“I really thank God for that. It tells me that we all speak with one throne. And we all believe in one holy God. And I trust my friends, that we join ourselves together and present the gospel of Jesus to you in Clare Valley, you will respond and God will bless you very well.”