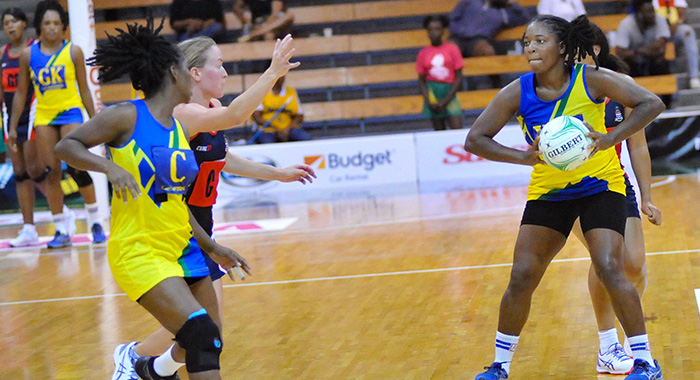 SVG debutant and wing defense Nya Miller about to make a pass to team captain Ruthann Williams in the game against Cayman Islands.

St. Vincent and the Grenadines added another scalp to their victory pole with a 69 – 45 defeat of the Cayman Islands on Friday as the Netball World Cup Regional Qualifiers continued in Jamaica.

“We had a fairly good tournament, it could have been better,” Head Coach Godfrey Harry said.

He refused to be drawn into making any statements that St. Vincent and the Grenadines could qualify on the possibility of an outside chance.

Harry said the team has developed as a unit from when they began first in training, and then competing at the qualifiers.

Grenada is the final opponent for SVG on the final day of competition, and that match commences at 4:15 p.m., Eastern Caribbean time on Saturday.

SVG have won their games against Antigua and Barbuda, St. Lucia and the United States and lost against Barbados, as well as a non-qualifying match against Jamaica.

The team is seeking to grab one of two available spots for the world championship in South Africa next year.