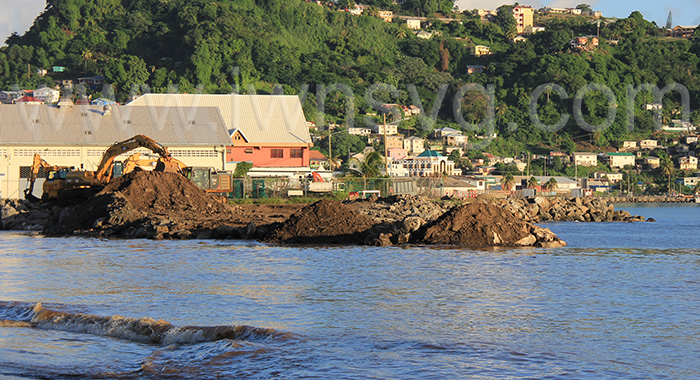 Lawmakers have approved, post facto, the spending of an additional EC$70,395,469 in excess of the EC$40 million budgeted this year for construction of a new port in Kingstown.

“What we’re really discussing now is the fact that we have the happy challenge that we are a little bit ahead of where we thought we would be in the construction of the port project,” Minister of Finance, Camillo Gonsalves told Parliament in presenting the Supplementary Appropriation Bill.

“And, therefore, we’ve exceeded significantly the $40 million that we had in the appropriation bill,” he said, referring to the budget approved in January.

He noted that the EC$70 million is money that had been secured as the government has already secured all the funding for the US$250 million port, being built at Rose Place.

“This is simply to journalise and bring to account the money that we’ve been spending on this particular project,” he said, in presenting the bill, which was approved with opposition support.

“And I’m very pleased with the progress thus far, as indicated by the $100 million that we’ve already spent in getting this important piece of infrastructure on the way in Rose place and St. Vincent and the Grenadines.”

Gonsalves noted that the Estimates approved at the beginning of the year contained two line items of EC$20 million each to be spent on the port this year.

He said that the discussion in arriving at those figures was balancing between allocating too much money and, thereby, inflating the capital budget and, at the same time, not budgeting enough.

“And we thought that realistically, at the time, if we started in the third quarter or late third quarter, early fourth quarter of the year, and we paid the mobilisation to the contractor, we would spend about $40 million this year,” Gonsalves said.

He said that the Caribbean Development Bank, however, approved the loan earlier than the government anticipated.

“We hired the contractor earlier than we anticipated, they began work in earnest, very quickly.  And pretty soon, we exhausted the $40 million that we had in the budget, because a significant amount of that is mobilisation for the contractor.”

He said the contractor then began work clearing the lands, relocating the sewer line at Rose Place, ordering the various pieces of equipment that they need to begin the surveys, the diving, importation of piles and other types of equipment and so on.

“And we realised that we were required to spend a great deal more than the mobilisation money. And this is a good problem to have, because, obviously, the money has already been lined up.”

The approved project includes construction of the cargo terminal north of the existing cargo port in Kingstown.

Additional components include rerouting of the sewer line, associated road and improvement works.

The Government of St. Vincent and the Grenadines signed a contract with Akon Construction Group Inc., a Canadian company, and a supervision consultancy with Sellhorn GmbH, of Germany on May 3, paving the way for the commencement of construction works on May 12.

Gonsalves said that since May, the government has paid $99,895,125.34 to the contractor, adding that a significant portion of that was the contractor’s mobilisation money and security money.

“And to date, to the supervision consultant Sellhorn GmbH, of Germany, we have paid EC$298,228,” the finance minister said.

He said the government has paid EC$400,000 to the project management team of consultants.

“Obviously, since we’ve only budgeted 40 [million dollars], there is an issue here that we have to resolve because we’ve already exceeded the 40 by $60 million,” he said, noting the need for the supplementary appropriation bill.

“We expect to spend the other $10 million before the year is out, which is why the money has been appropriated in this manner.”

The minister said that the contractor has advised that the port is 8% complete.

He said the contractor has 42 staff working on the site, about 13 of whom are contractor staff and the remainder are local labour or subcontractor personnel.

The finance minister told Parliament that the visible work to date has been the clearing of the land, the securing of the property and the beginning of the work on the sewer line.

“But a great deal of equipment and materials have been purchased by the contractor, which we expect will be arriving on island in the coming weeks,” Gonsalves said.

He noted that the project has seven components: the project preparation, infrastructure works, the engineering and construction, goods, institutional strengthening, other port services and project management.

“And the bulk of that money that we’re talking about here so far is for goods and for infrastructure,” he said, noting that people who previously lived or conducted business on the seafront have been relocated to Lowmans Bay.

The project is being funded by a US$110 million loan from the Caribbean Development Bank, a grant of about US$32 million from the CDB-administered United Kingdom Infrastructure Fund, and a US$43 million contribution from the Government of SVG.