Opposition calls for strict accounting of US$450m for new port 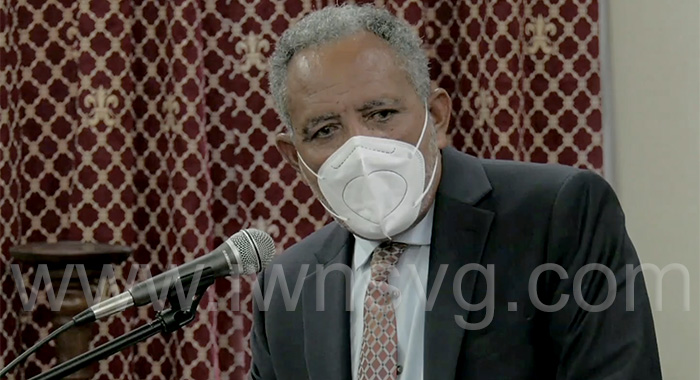 Opposition Leader Godwin Friday says there must be strict accountability for the US$450 million to be spent to build a new port in Kingstown.

He made the point in Parliament last week as lawmakers were asked to approve supplementary estimates of EC$70 million in excess of the EC$40 million that they had budgeted to be spent this year.

Minister of Finance Camillo Gonsalves, in asking Parliament to approve the supplementary estimates, said that the project had progressed faster than anticipated.

“The important thing, of course, is that what we are discussing is really a major infrastructure project in this country. Huge.”

Friday said that when Parliament debated the borrowing of monies from the Export-Import Bank of Taiwan, opposition MP went over “some of the ramifications of that large expenditure and the expectation as to how it will be utilised and the benefit that might be derived from it.

“Of course, as prudent people and as responsible members of the opposition, we have to always be concerned about how the funds are allocated, how they’re expended, and to ensure that we can have transparency and accountability in the execution of the project,” Friday said.

He said this is the case even then the opposition supports bills authorising the government to borrow money to finance projects.

“And in so doing, we indicated our support for the project, recognising the need for a modernized port in St. Vincent and the Grenadines.”

The opposition leader noted that the project would cost over EC$600 million, over EC$500 million of which is borrowed funds, which “always creates concerns about cost and repayment and so forth”.

Friday pointed out that the finance minister had said that the supplementary estimates had to be brought “because, as he puts it, the project is in the happy position of having gone further and faster than they anticipated”.

The opposition leader said this could raise questions about proper project management and why the expenditure had not been anticipated.

“And if it’s over 10%, 20%, something else, but to more than double it? We would question about going forward, how these funds are allocated, what the expectations are, the work that should be done and to ensure that we have proper and timely allocation of funding, authorised by this house.”

He said that one of the things that came out of the need for the supplementary estimates, “obviously, is that the minister now has to come to the house and tell us where they have reached on the project, what the monies have been spent, how much money has been spent and who they have been paid to.

“That is part of accountability and transparency. However, we in the opposition, we are not naive to think that this sort of information is going to be provided on a regular basis. But we’re also determined to ensure that it is, because we want to know at every stage of the project, how it is moving along.

Friday said a part of the duty of the opposition and the government is “to ensure that the people are informed along the way.

“Because, ultimately, it’s the taxpayers who are going to have to bear the responsibility of repaying the loans and also taking the risk in that respect of the project as to whether it will bear fruit in the manner intended.

“To a certain extent, there is a leap of faith. I want to get a commitment and acknowledgement from the minister that there is going to be regular reporting whether or not the need for a supplementary estimate presents itself in a manner in which a project is unfolding,” Friday said.

“The point I’m making is this: There is a duty and obligation for a project, especially of this magnitude, that there be regular and timely updates in this honourable house, as to how the project is unfolding, what the funds are being used for.”