‘I work for Julian Francis,’ man tells cops who reprimanded him for swearing in public 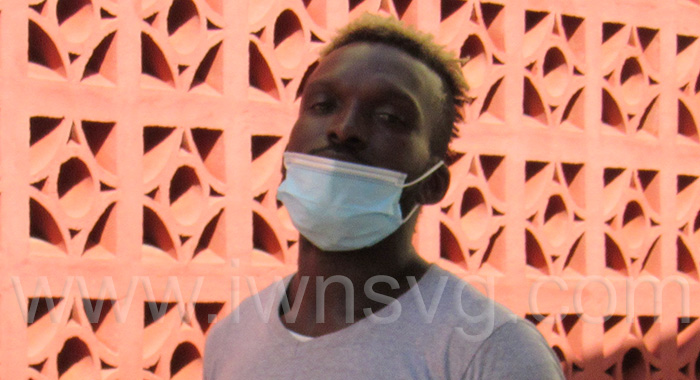 The defendant, Shem Baptiste, leaves the Georgetown Magistrate’s Court after being found guilty.

A man who police scolded because of his aggression at an entertainment event in Georgetown, responded with expletives, adding, “I work for Julian Francis.”

This was the evidence of Police Constable 1000 Minors as he testified at the trial of the man, Shem Baptiste, a block maker, of Georgetown.

He pleaded not guilty to charges that he damaged PC Minors’ property, to wit, a cellular phone, and that he made use of indecent language.

Baptiste was tried on the two charges to which he pleaded not guilty.

Minors told the court that on July 23, about 1:20 a.m., he and Stapleton were on duty at Spotlight Stadium, where an event was taking place.

The officers were dressed in the uniform of the Royal St. Vincent and the Grenadines Police Force.

Minors said he observed the defendant behaving in an “aggressive” manner.

“I approached him and told him to relax himself but he did not comply. He told me, he knows the f***ing law,” Minors said.

The policeman said he asked Baptiste to desist from using such language in a public place but Baptiste persisted, saying, “I work for Julian Francis.”

Minors said he pointed out the offence of indecent language to the defendant and told him he was going to arrest him, but Baptiste “pulled away his hand from me and pushed me in my chest”.

The policeman said that Stapleton came to his assistance and Baptiste also pushed Stapleton and said, “No f***ing police nar lock me up!”

The officer said he and Stapleton tried to restrain Baptiste for about 15 minutes, which resulted in a “wrestle” during which the defendant ripped two of his shirt buttons.

Meanwhile, Stapleton testified that he went to Minors’ assistance after he saw the interaction between him and Baptiste.

“I held on to Shem’s hand and told him he was under arrest, he pulled away his hand and pushed me in my chest and said ‘No f***ing police nar lock me up.”

Stapleton told the court that the defendant was “fighting up” and in the process ripped the buttons from his regulation shirt.

He further said Baptiste pushed him against a table, damaging his Samsung cellular phone in the process.

Stapleton told the court Baptiste also punched him in the back of his head with a closed fist.

Stapleton said the cellular phone was valued at EC$1,200 and the shirt at EC$150.

After arresting Officer Corporal Caesar gave evidence, Baptiste said he had never seen the phone and the shirts before the day of the trial.

In his defence, Baptiste said he was “vexed” when he left the stadium so he went to a nearby bar where he saw both officers.

The government has a policy that drinks at public events must not be served in glass bottles, but rather should be poured into disposable cups.

“I told the officer I was going to report him. As soon as I turn my back. I feel someone hold on to my hand and he tell me I lock up,” Baptiste said

Baptiste said he asked the officer why they were arresting him but none of them answered.

“I refused to go with them and they tried to pull me, tearing my jersey in the process. I fight back and when I see me getting too much licks, I give up.”

During cross examination by Prosecutor Corporal Delando Charles, Baptiste said he had about three drinks but he wasn’t drunk. He admitted to ripping the officers’ shirts during the fight but maintained that he never saw the damaged cellular phone nor shirts before.

The magistrate found the defendant guilty.

Baptiste was reprimanded and discharged for resisting the arrest of PCs Minors and Stapleton.

For assaulting the officers, he was ordered to pay, within one month, a fine of EC$400 on each of those charges. In default, he would spend three months in prison on each charge, to run concurrently.

Failure to pay compensation in two months will result in four months’ imprisonment.

On the indecent language charge, Pompey fined Baptiste EC$300 to be paid in one month or three months in prison.

“You deserve a prison sentence,” Pompey said to Baptiste as he told him to step out of the defendant’s dock.

2 replies on “‘I work for Julian Francis,’ man tells cops who reprimanded him for swearing in public”