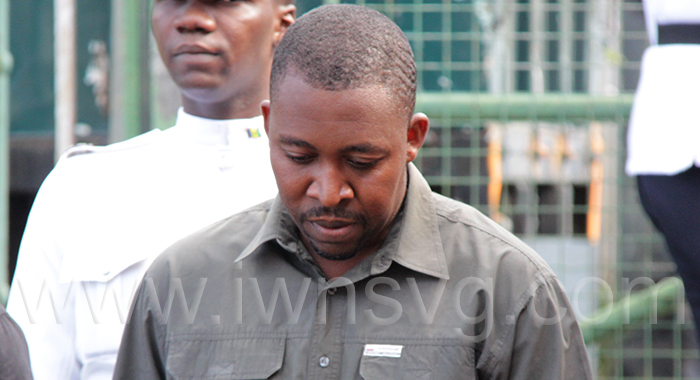 Former police officer Vandyke King, 36, of Park Hill has been sentenced to 20 years in prison for murdering his girlfriend and fellow villager, Mickeisha Gumbs, 26, in front her three daughters on March 7, 2020.

However, since he had spent two years, seven months and 16 days in prison awaiting the disposal of his matter, King will serve a further 17 years, four months and 17 days in prison from Tuesday, when his sentence was handed down.

Justice Brian Cottle had arrived at a notional sentence of 30 years in prison before applying the one-third discount for the early guilty plea, which brought the sentence to 20 years.

He handed down the sentence at High Court No. 1, one day after hearing a mitigation in which defence counsel, Duane Daniel waxed poetic and cited literature, mythology and theatre as he urged the court not to grant the prosecution’s request to increase the starting point of the sentence.

“This is clearly a crime of passion,” Daniel told the court after presenting King’s version of what led to his crime.

He said that maybe King’s victim was his “femme fatale”.

Justice Cottle had adjourned the sentence to consider Daniel’s submission.

In handing down the sentence he noted that King and Gumbs, who has a 1-year-old daughter at the time, were in a relationship in which there was, apparently, violence on both sides and  accusations of infidelity traded.

The judge said that sometime before the killing, Gumbs had confessed to King that she had had an abortion but was unsure of who the father was.

The judge noted that Daniel had filed affidavits to attest to King’s character.

In the affidavits, fellow villagers described him as devoted to Gumbs and said that the violence that led to Gumbs’ death was entirely out of character.

King expressed remorse, pleaded guilty and surrendered himself to the police, Justice Cottle pointed out.

He noted the classical aims of punishment — retribution, deterrence, prevention and rehabilitation — adding that the court is expected to follow the sentencing guideline unless they lead to injustice in a particular case.

The judge said he saw no reason to depart from the sentencing guidelines and proposed to follow them closely.

He pointed out that in St. Vincent and the Grenadines, a conviction of an adult for murder range from a death sentence, a whole life sentence or a determinate sentence. Where a person is found to be insane or suffering from a relevant mental disorder, the court can order that the offender be detained at the court’s pleasure.

The Crown did not seek the death penalty and Justice Cottle said this was quite proper as the killing did not rank among the worst of the worst.

He said he was content in establishing a starting point of 30 years within a range of 20 to 40 years, noting that King had taken a bladed weapon to the scene with the intention to use it.

Regarding the aggravating features of the offence, Justice Cottle noted that the murder was committed in public and children were present, including King and Gumbs’ 1-year-old daughter.

The judge said he had seen the victim impact statement of Gumbs’ 9-year-old daughter who was forced to witness the senseless slaying of her mother.

He said the child said she was unable to move during the incident as she feared for her own life as well.

The child is psychologically scarred, has difficulty sleeping, is withdrawn and, naturally, misses her mother greatly, the judge said.

He said that King inflicted multiple injuries but the killing does not bear the hallmark of substantial degree of premeditation, although he had left the scene armed himself and returned.

The judge pointed out that the relationship had a history of physical abuse and King’s outburst came about because of suspicion of infidelity.

He said the mitigating features of the offence were that King cooperated with the police and surrendered voluntarily.

The court found no aggravating feature of the offender, noted his clean record and good character. The fact that he is viewed as a good candidate for rehabilitation was also a mitigating feature.

King’s actions were borne of jealous rage and were unlikely to be repeated, Justice Cottle said.

The court saw significant aggravating and mitigating features of the case, which balanced each other out.

The judge, therefore, did not adjust the starting point.

The facts as presented by Justice Cottle are that King and Gumbs shared a common law union that produced a child, who was 1 year old when Gumbs was killed. Gumbs also had two older children from a previous relationship.

King and Gumbs’ relationship was tumultuous and he would inflict violence on her in public, Justice Cottle said.

On March 7, 2020 at about 5 p.m., Gumbs left her home in company of her three children and other children. She had been to pick up her youngest child.

Around the same time, King was in the Park Hill area and asked a resident to lend him a cutlass.

The resident refused and King attempted to take the cutlass from the resident but was unsuccessful.

Gumbs was a short distance away and King approached and began to quarrel with her, and demanded to know whose vehicle she had been in earlier.

Gumbs and her 9-year-old daughter both told King that they had travelled by van and later got a ride from a car from Colonarie to Park Hill.

King was noticeably upset and left the scene and Gumbs and another woman and several children continued on their way.

Another Park Hill resident observed King with two knives on his way back to the scene and told Gumbs about this.

King approached Gumbs and her party with an object wrapped in a yellow rag in his hand.

Gumbs tried to flee but tripped and fell in a flower garden and the other woman ran away calling for help.

King leapt on her and stabbed her several times in the area of the neck, in the presence of her 9-year-old daughter and other children.

King then left the area.

In his mitigation, Daniel told the court that the facts were not fully contextualised, adding that the duo were in a relationship fraught with ups and down but it appears from the history that there was violence on both sides.

The lawyer said that the relationship was plagued with allegations and accusations of infidelity.

He said that after the killing, King was not assessed by a psychiatrist until five days later.

Daniel said the killing was a crime of passion activated and motivated by a jealous rage and argued that the court might have been better assisted if there had been an early psychiatric evaluation.

The lawyer said that if an appreciable period of time passes between the offence and assessment, it is not always easy to tell the state of mind at the material time, but said he was not advancing this in mitigation.

He said it is clear from the manner in which the offence was committed that King’s mental state at the time “was obviously in question”.