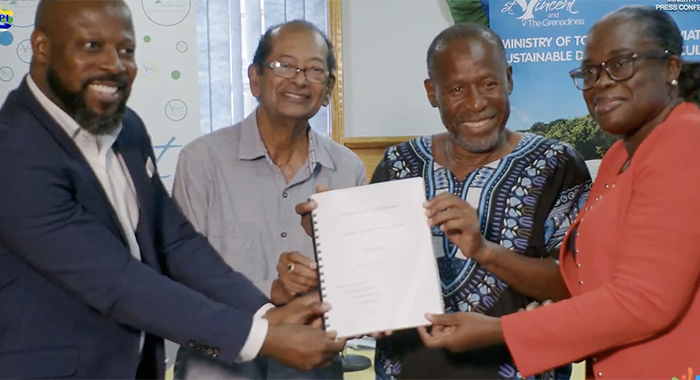 Four historians commissioned in 2019 to write a comprehensive history of St. Vincent and the Grenadines have presented the first three chapters of their work.

Garrey Michael Dennie, Adrian Fraser, Cleve Scott and Arnold Thomas, all of whom hold doctorates, have been commissioned to produce a textbook to teach the history of SVG at the secondary and post-secondary levels.

“The Vincentian story is virtually unique within the Caribbean because these two processes of genocide and slavery occur almost simultaneously in the same space. Virtually nowhere else in the Caribbean was the genocide immediately followed by the imposition of a slave society,” Dennie said.

He said that each of the four historians “is an independent intellectual in our right.

“To be able to work together then means having to develop a kind of rhythm, a set of understandings by which we are able to transform ourselves from single individuals into a working collective. And we have managed to do that very, very well.”

He said that a primary author drafted each of the three chapters produced so far.

“But then where the where the real work began, is that we would all sit and read each and every single line of every single chapter together, making changes, as we so determined and, in fact, Thomas, in particular, did an extraordinary amount of reading as we went through the discussion of this work.”

He said that the historians have developed a plan to write this work in two volumes. Volume one is divided into three sections, each of which has multiple chapters.

The team has completed the first three chapters of volume 1, with a fourth chapter expected to be completed in two weeks.

Dennie said chapters 1 and 2 tell the story of the rise and fall of indigenous civilisations in SVG, with  chapter 1 focuses on the history of the human presence in SVG before the arrival of the Europeans in the Caribbean.

“In fact, the first human being to set foot on this land did so 5,000 years ago, and it seems to me that,Vincentians need to have a certain kind of astonishment that we live on a land where human beings have been walking for 5,000 years, and that kind of recognition, that kind of cognition is not always with us,” Dennie said.

“And this book sets out to give us that sense of wonder that comes with this kind of history.”

Dennie said chapter 2 traces the ways in which “these indigenous Vincentians, who developed the first civilisation here in St. Vincent, resisted European conquest up to 1797.”

The historian said the “truly astonishing” aspect about the indigenous resistance to European presence in St. Vincent,  lasted longer than anywhere else in the Caribbean.

“Our first three chapters capture this terrible transformation, and can stand on their own as a powerful story of the Vincentian past that must be told.”

He said that the team of historians is hoping to complete the fourth chapter shortly.

“And we anticipate that we can accelerate the research and the writing process to complete volume one.”

Dennie said that when the fourth chapter is completed, the work so far will “detail a story of the Vincentian historical experience that can be found no place else.

Speaking at the same press conference, Thomas said that when he started to work on the book, “I never realised there was so much work involved.

“This is a very time consuming project, because we are going through a mass of materials we never, never knew existed. And this has taken a lot of time. So what we are coming out with is something unique.”

He said the draft so far has about 400 pages.

“You’re gonna get quite a few today. But it’s a lot of work and we’re all dedicated. And one good thing that is coming out from this exercise, all four of us are on the same page as we would say,” Thomas said.

“So ideologically, we know where we’re coming from. And this is not a political ideology…This is about historians who are digging real deep into your past and coming up with something that we’ve never heard or seen before. So we promise, look forward to great things from us.”