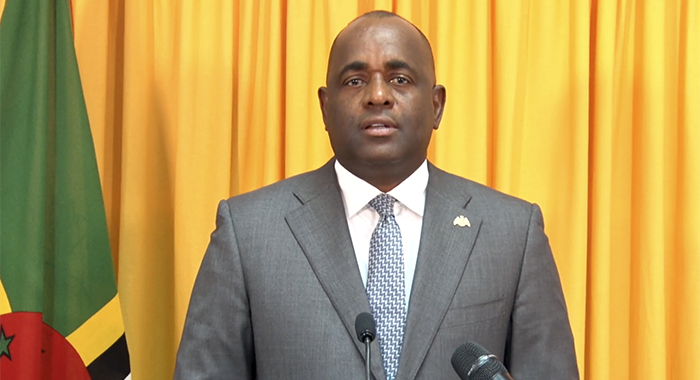 Prime Minister of Dominica Roosevelt Skerrit as he delivered the national address on Sunday, Nov. 6, 2022.

ROSEAU, Dominica (CMC) — Prime Minister Roosevelt Skerrit Sunday night announced Dec. 6 as the date for a snap general election in Dominica, three years after he led the ruling Dominica Labour Party (DLP) to a convincing 18-3 victory in the general election of 2019.

In a radio and television broadcast, Skerrit said Nomination Day will be Nov. 18.

The DLP is expected to face a challenge from the main opposition United Workers Party (UWP), which held three seats in the last Parliament, and whose leader, Lennox Linton, resigned from the position of party leader last month.

“We need a refreshed Dominica Labour Party team, for these very unpredictable, unprecedented and very challenging times. Following the changes we made in 2019, there shall next time around be other changes, to ensure the continued renewal of our Labour Party frontline, and maintain our continued relevance and the achievement of the visionary goals that we have set ourselves and our country…

“The Dominica Labour Party must continue to be the beacon of hope. It must be the option for those who wish to see our country progress. The challenges that we face are now … they are already upon us. We cannot take chances with the future of this country,” Skerrit said, adding, “… we have set ourselves on a progressive path of development and growth that will see prosperity for our people and our country…

“I shall be honoured to use the benefits of my 22 years’ experience in politics, to lead the Dominica Labour Party and this country, through this period of global social, political and economic uncertainty.  We shall be the change that the country requires as we continually reshape, adjust, and correct course, as we move steadfastly towards that Dynamic Dominica, a resilient Dominica.”

Skerrit said with that in mind, “I shall lead a new-look Dominica Labour Party into fresh general elections that will be held at the soonest possible time. I want for the year 2023 to begin with a fresh mandate, given to a fresh Labour team, to commence the work of building post-COVID Dominica.”

He said he had asked President Charles Savarin to dissolve the current Parliament with immediate effect and that a fresh writ be issued on Monday, Nov. 7 for the holding of general elections in Dominica.

Skerrit said that while the DLP will unveil its candidates for the polls at a public meeting on Tuesday, “Nomination Day in Dominica shall be Friday the 18th of November. General elections day in Dominica, the day on which the Dominica Labour Party will be seeking a fresh mandate, with a fresh team, is Tuesday 6th December, 2022.”.

Skerrit told the nation that since his party was re-elected in 2019, Dominica, like the rest of the global community, has had to deal with a number of issues, ranging from climate change to the Russian invasion of Ukraine and its consequences on the socio-economic development of the island.

“My brothers and sisters, we have had to play the hand that nature, fate and man’s inhumanity to man, have dealt us. We have been riding the tide, in an ocean that’s full of turmoil. We tune in to international news each day and the outlook for several countries is becoming grim.

“Here in Dominica, we have begun the fight back. We have been knocked to the ground repeatedly, but we are back on our feet. We have dusted ourselves off and we are on the move again. We have a story in Dominica, we can all be proud of.

“You do not have to be economists to observe and understand that government’s revenues have been rocked in recent years by the impact of Erika and Maria, by the COVID pandemic, and now from global food and fuel supply shortages, occasioned by the war in Ukraine. “

He said that even though revenues were down from every sector, the expenditures of his administration remained relatively high, because “we continued to meet the needs of our people.

“We took action to keep you safe during COVID, and we prevented people from descending into abject poverty, by keeping them employed. Yes, these challenges would have resulted in delayed payments to some of our creditors, but demands on the treasury over the past two years, especially from the health sector, were unprecedented…

“We had to act to save lives. We had to keep persons employed and their families secure. We had to provide support to persons especially in the tourism sector who lost their jobs. We were able to wrestle COVID to the ground. And yes, we are now in recovery mode as a result of wise decision making.

“I am happy to report that we are addressing the issue of late payments to creditors, and several accounts now show a zero balance. “

Skerrit said that the government took deliberate steps to maintain social services, saying “we insisted that families should not go without the necessities of life, even though revenues were declining drastically.

“We held steadfast to our commitments to the elderly. They were at risk and we ensured that their needs were met during that period of grave uncertainty. These things we did, Ladies and Gentlemen, and I think Dominica is this evening the better for it, because we remained glued to a philosophy of leaving no one behind.“

He said that the attainment of the goals his administration had set call for hard work and dedication by the entire workforce.

“It will call for confidence and decisive action of investors. It will call for policies that will inspire public officers and motivate them to give of their best in the implementation and administration of such programmes”.

He said the DLP has not shirked from making changes that enables it to remain dynamic, relevant and inspiring, noting that in the last general elections, “we introduced to you a new slate of candidates that included 11 new, young and energetic faces.

“The challenges that they have faced have not been for the faint hearted. They would have come into office at one of the most difficult times in our history. What we had hoped to achieve has been in many ways set off course by the COVID pandemic.

“We are at a crucial stage of national development, ladies and gentlemen, and we have to ensure that we have the right team for these times. The road ahead will be challenging. It will be difficult. We believe that the Dominica Labour Party must look across the country and secure the perfect skill set for these Accordingly, there will be some changes to our Parliamentary team. We have discussed these changes among ourselves, and the time is coming, very shortly, when they shall be revealed to the country.

“Labour is not about discarding anyone. The task ahead is tremendous. We will need all hands on deck to give ourselves a reasonable chance at success. All current hands will be re-deployed to assist in the navigation of our national ship to safe harbour,” Skerrit said, adding that there is need for a re-set of the goals going forward.

“This current Dominica Labour Party administration was elected in 2019 with a particular mandate. We outlined policies in pursuit of a Dynamic Dominica. We set ourselves goals, within a specific time frame, that cannot now be met because of the unforeseen global circumstances.

“The reality is that our country was paralysed for months. Things we wanted to do, we could not do. Some things we started, have not yet been finished. This is not a game of juvenile rounders. Running a government and a country is serious business. We have to operate in the realm of reality and practicality. We have, as a nation, to press the reset button,” Skerrit added.