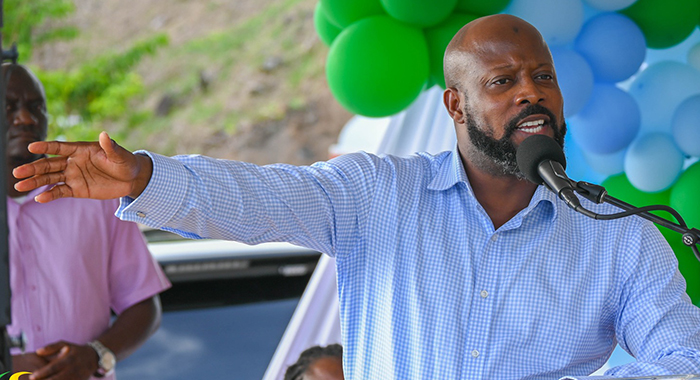 MP for North Leeward, Carlos James speaking at an official event in his constituency on Sept. 8, 2022. He said on Facebook on Nov. 5, 2022 that a post making certain allegations about him is “unfounded, false and defamatory”. (Photo: API/Facebook)

Minister of Tourism Carlos James has described as “unfounded, false and defamatory” a post being circulated on social media, making certain allegations about him.

James, a lawyer, who is into his first term as MP for North Leeward, warned against “sharing and circulating defamatory statements” and said he was trying to determine the origin of the post.

The post being circulated on social media spoke of an alleged incident on Nov. 2.

“While I understand the excitement for salacious gossip, there are things we simply take too far.  It was brought to my attention of a post circulating on social media regarding an alleged incident purporting to involve ‘a recent contestant in the Miss SVG 2022 pageant’ and a ‘Registered Nurse’.  This is simply unfounded, false and defamatory.

“We ought to be mindful of people’s reputation when sharing and circulating defamatory statements.

“While we are trying to ascertain the origin of this post, I want to remind the general public that you too can be liable for sharing or republishing defamatory statements.

“I hope that we can all be guided accordingly and refrain from damaging the reputation of others.”