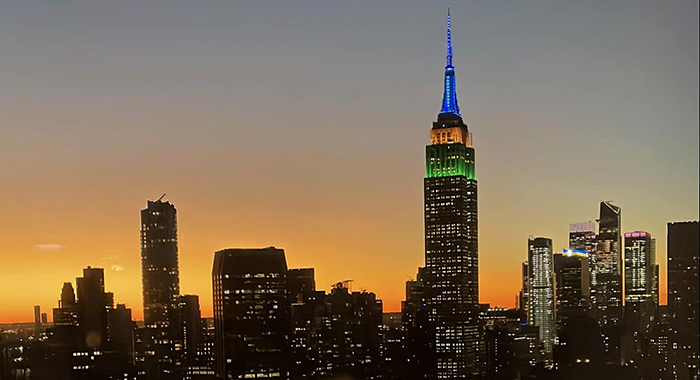 The Empire State Building lit up in the national colours of St. Vincent and the Grenadines on Oct. 27, 2022, SVG’s 43rd anniversary of independence. (Photo: Facebook/Emanuel Quashie/Twitter/KevPolitics)

For a second consecutive month, the Ministry of Tourism, including its marketing arm, the Tourism Authority, has missed a major opportunity to market St. Vincent and the Grenadines (SVG) internationally.

In response, Prime Minister Ralph Gonsalves, on Sunday, chided  tourism officials in New York over their absence from the inaugural flag raising ceremony and lighting of the Empire State Building on Oct. 27,  in celebration of St. Vincent and the Grenadines’ 43 anniversary of independence.

“… very often heads of state agencies and permanent secretaries and chief technical officers, too many of them think that they’re monarchs, they are Napoleonic,” Gonsalves said on WE FM.

The prime minister was speaking on “Issue at Hand”, on which Minister of Tourism, Carlos James was the featured guest.

One of the hosts of the programme told James that a listener had commented, via WhatsApp, that the presence of tourism marketers are needed at such events, and SVG missed an opportunity to market itself.

“Point taken,” James said, adding that he was not sure exactly what had transpired.

“Because the Consul General, the consulate works very closely with the office there. So I’m not sure what, if any, there were any challenges as it relates to that. But that’s something that we’ll have to look at,” the minister said.

However, Gonsalves, in a call to the programme, said the absence of the tourism officials “illustrates the necessity and desirability for greater coordination between various agencies of government”.

The prime minister said that the  Ministry of Tourism “was more or less absent” from the event.

He said that the effort was initiated by SVG Consul General in New York, Rondy “Luta” Mc Intosh and his team.

“And I know that the thing was done quickly, rapidly. But we have instant communication. You just have to type something and press a button and it gone.  … a carrier pigeon ain’t got to bring the news from New York to St. Vincent,” the prime minister said.

“That initiative, although we got a lot of benefits from it, we could have gotten far more benefits from it. If there was better coordination between Luta’s consular office — I know that they’re under the embassy in Washington — with the embassy in Washington and with Luta and the Ministry of Foreign Affairs and with the Ministry of Tourism,” the prime minister said.

“The Ministry of Tourism, including the Tourism Authority. Absolutely,” Gonsalves said.

“And I’m glad that Carlos mentioned that because one of the things you have happening in governments throughout the Caribbean and indeed in the world, if you studied the literature comparatively, … that very often, heads of state agencies and permanent secretaries and chief technical officers, too many of them think that they’re monarchs, they are Napoleonic — some of them,” Gonsalves said.

He continued: “Well, this is not about you, individually, this is about the country and for us to coordinate better. And in the language of the modern management science, to optimise the synergies between all the various agencies decidedly.

SVG did not make a presentation presentation during the “Destination Media Briefings” that formed part of the Caribbean Tourism Organization’ Business Meetings and Caribbean Aviation Day, in Cayman Islands from Sept. 12 to 15.

It was the first time that the events were being held face-to-face since the onset of the COVID-19 pandemic in 2020 and there was no presentation from SVG, although Glen Beache, chief executive officer of the SVG Tourism Authority attended the event.

iWitness News was reliably informed that when questioned about the matter, the Tourism Authority told the Cabinet that there were only slots for eight destinations  to make presentations at the event.

However, at least 16 destinations made presentations at the event, which presented opportunities for Caribbean destinations to market themselves to regional and international media, many of which are focused on travel and tourism.