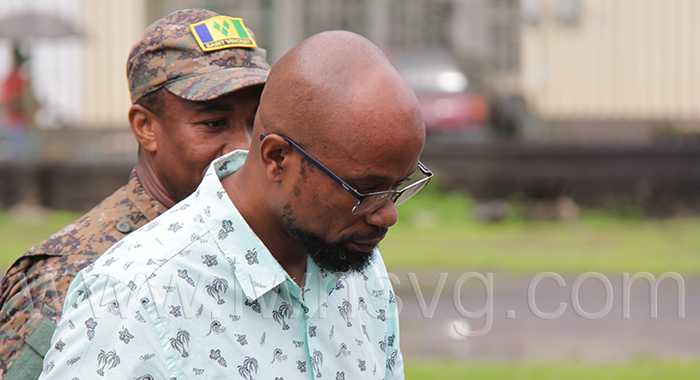 Barrington “Baige” Cornwall is escorted to prison on Tuesday, Nov. 22, 2022 to serve the remainder of his prison sentence.

The barber who on Aug. 4, 2021, stabbed to death a man who attacked him with a broom stick at the barbershop where he worked in Kingstown was on Tuesday sentenced to a further five years, four months and 12 days in prison.

Barrington “Baige” Cornwall, 44, of Park Hill had spent one year, three months and 18 days in custody in connection with the death of Jexol Skinner, a 40-year-old financial advisor, of Edinboro.

As High Court judge, Justice Brian Cottle handed down the sentence at High Court No. 1, a woman began to vocalise in court and was quickly escorted out by a court orderly.

Outside the court, she complained about Skinner’s child growing up without a father, while his killer will serve only a further five years in prison.

Justice Cottle began with a 12-year prison sentence and arrived at the final sentence after considering the aggravating and mitigating feature of the offence and the offender, applying the discount for the early guilty plea, and subtracting the time spent on remand.

On Oct. 17, Cornwall pleaded guilty to manslaughter and the Crown accepted that plea.

The sentence was handed down one day after defence counsel, Duane Daniel, mitigating on Cornwall’s behalf, asked the court to begin with a 10-year sentence.

The lawyer argued that the offence straddled Level B and C seriousness, according to the sentencing guidelines.

In handing down his sentence, Justice Cottle noted the aims of criminal punishment, namely Retribution, deterrence, prevention, and rehabilitation.

He said that none of the aggravating factors, as outlined in the sentencing guidelines, were found in the case.

Mitigating was the fact Cornwall had expressed that his intention was not to kill  Skinner but to cause serious bodily harm.

Further, Cornwall remained at the scene and cooperated with the authorities after the stabbing.

The court found no aggravating features of the offender.

Mitigating was his genuine remorse and his good character, Justice Cottle said, noting that for over two decades, Cornwall was no in conflict with the law after being imprisoned in Barbados.

The court concluded that the mitigating features outweighed the aggravating and moved the notional sentence down by two years — to 10 years.

The judge gave Cornwall the full one-third discount for his early guilty plea, which reduced the sentence to six years and eight months.

The one year, three months and 18 days that Cornwall spent on remand was deducted, to arrive at the final sentence.

The stabbing incident took place at Ambrose Barber Shop, on the ground floor of Baynes Building on Granby Street, Kingstown, where Cornwall’s was one six barber chairs.

The barbershop is outfitted with video cameras and on Aug. 4, 2021, there were five operative stations, manned by Jarod Paris, Frankie  Anthrobus, Wendel “Chubby” Davis, Curlan “Q” Joseph and Cornwall.

The facts, as agreed by the prosecution and defence, are that on Aug. 4, 2021, about 4 p.m., Skinner, one of Davis’ patrons, entered the barber shop.

When Skinner entered the shop, Davis, Paris and Joseph were in attendance, and Skinner occupied Davis’ chair and the four of them began to have a conversation.

Cornwall entered the shop while Skinner was seated in Davis’ chair and Skinner began an exchange of words with Cornwall.

During the exchange of words, Skinner was seated in Davis’ chair and Cornwall in another chair.

Skinner told Cornwall that he (Skinner) knew Cornwall had gone to prison in Barbados because he (Skinner) had been housed two cells away from Cornwall’s.

The men continued to argue and Skinner called Cornwall a “pussy”, “punk” and “b*ll*r man”, an offensive term meaning “gay”.

Cornwall responded: “If you think I am a punk, come over here and see.”

Skinner took a broom, unscrewed the stick, advanced towards Cornwall, and lunged the broomstick at Cornwall.

Cornwall took a knife from the barber station and stabbed Skinner multiple times.

He was taken to hospital and later pronounced dead.

Cornwall remained on the scene and handed over the  knife to the police and cooperated with them.

At the scene, he told police, “He leave weh he dey and come and start leggo broom pon me.”

In an electronic interview with police, he later said that he did not try to kill Skinner but was trying to defend himself.

“I don’t know how far he would have done with his thing. I was trying to defend myself.”

An autopsy found that Skinner had 14 stab wounds and pathologist Dr. Ronald Child concluded that he died of multiple stab wounds.

In his sentencing remarks, Justice Cottle noted that “b*ll*r m*n” is a pejorative reference to a homosexual male, adding that in the extremely homophobic society that is St. Vincent and the Grenadines, “this is a deadly insult”.

He said that Cornwall, provoked by Skinner’s words and actions, lost his self control.

Daniel filed five affidavits to the court, including one by Cornwall’s mother, Cynthia.

The judge pointed out that the affidavit said that Cornwall was 9 years older than his three siblings and was more of a father than a brother to them.

He moved to Barbados at age 7 to be with his mother, who had migrated there when he was 7 months old.

In Barbados, Cornwall worked as a nurse before he found himself in trouble with the law and was imprisoned.

After serving time in prison, he returned to St. Vincent, where he made his living as a barber, and did not reoffend for many years until the incident involving Skinner.