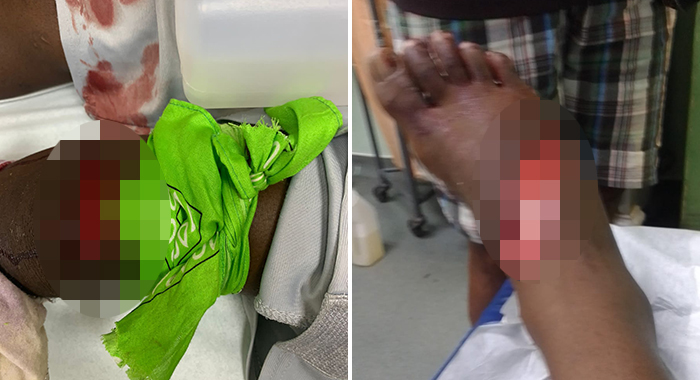 Two children were left with serious injuries at the playground in Barrouallie last week.

Two Barrouallie children are nursing serious wounds they sustained after accidentally running into a piece of exposed rusty metal at the public playground there last week.

Residents of the Central Leeward town told iWitness News, on Tuesday, that they understand that at least five children have sustained various injuries at the venue.

Simlet Pierre, 11, of Keatons Hill, Barroullie seems to have sustained the worst of the injuries and is at home unable to attend school.

Pierre, a Form 1 student of Barrouallie Secondary School, sustained a nasty cut to the instep of his right foot Friday night while attending an evangelistic crusade at Barrouallie Square.

The crusade took place on what used to be the playing field at Barrouallie Square and ended around 9 p.m.

Half of the playing field was converted to a playground several years ago.

The playground is now a veritable pile of dangerous metal and plastic as most of the equipment appear to be at the end of their lifespan and are now a source of danger rather than happiness to children.

Pierre said that when the crusade ended, someone sent him into the playground to call his friend so that they could go home.

“And on my way coming back, the steel hooked my foot and like it dug out,” he said.

Pierre said that the playground is not lit and he had seen the metal before and was trying to avoid getting cut from it.

He said that he thinks the steel should be removed and he feels “sad” that he is unable to go to school because of the injury, which took more than 10 stitches.

Anita Pierre, Simlet’s grandmother, told iWitness News that she took her grandson to the hospital after he was injured.

“The doctor told him he could stay in for like three days. And he began to cry and say he can’t stay there if I can’t stay with him. But I couldn’t stay with him. So, they stitched it up and gave him medication; they gave him a tetanus injection and sent him home,” the grandmother said in dialect.

Meanwhile, Sheron French, Simlet’s aunt said she understands that he is the fifth person to be injured by the piece of the metal.

iWitness News was able to confirm that he was the second child to be injured by the same piece of metal at the playground last week.

“What I think, from the first time that first person got damaged there, they should have gotten rid of that piece,” French told iWitness News.

“And even if they did not get it from the first person, at least the second. If people constantly get hurt, somebody might die as a result of it.”

French said that a representative of the Barrouallie Town Board had promised to visit the injured child but was yet to do so.

She told iWitness News that her son told her that he and another child were playing at the playground and he fell and was injured by the same piece of metal.

“His foot is injured badly because I had to take him back to the doctor on Monday because it is infected.”

She said her son received six stitches. “It could have taken more but he was crying,” she told iWitness News.

She said that her son, a Grade 4 student at Barrouallie Government School, goes to school despite his injury because she has a vehicle and drops him.

“But the whole of here is swollen so he has to elevate it,” he said, pointing to the leg area. ‘And as the sore heals, the doctor said, the swelling will go down. I just hope that it doesn’t infect the bone,” Griffith told iWitness News.

“I was saying they should close down the playground because a lot of the stuff is already mashed up,” Griffith said in the Vincentian vernacular.

“… the slide is disconnected from where it is supposed to be.  A lot of them have holes that you can go through, steel broken off and a lot of those things.”

Griffith told iWitness News she thinks that the playground is a hazard, adding that another child was injured.

“And his is worse than my son’s because it is on his shin,” she said, referring to Pierre.

She said that schools in the area take children to the playground.

“Down there needs closing down. Trust me,” Griffith said, adding that she was among people who had campaigned against the field being converted into a playground.