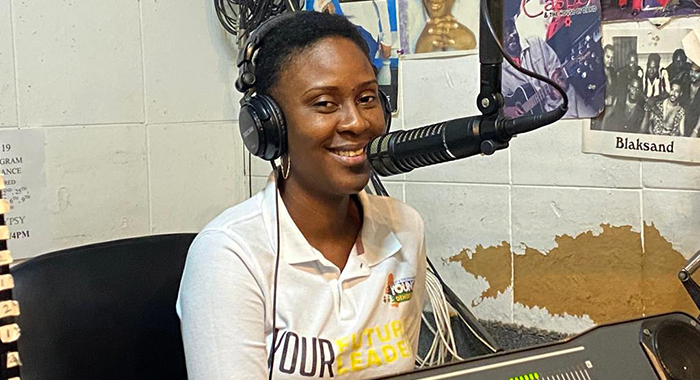 Newly-elected president of the Young Democrats, Vakeesha John says her focus is on the group, the youth arm of the main opposition New Democratic Party (NDP), but she is not dismissing a possible candidacy in Central Leeward.

John, an educator who was fired from her government job over the COVID-19 vaccine mandate last year, was elected unopposed at the NDP’s Youth Convention, in Kingstown, on Sunday.

“For now, my focus is the Young Democrats. I’m here to function and to give it my all. I’m not dismissing any future opportunities,” John said Tuesday on NICE Radio’s “Current Affairs”.

“So regardless to where I go, I am from Central Leeward. I represent Central Leeward. I live there. It lives in me and I will have your best interests at heart if I ever decide to do that,” she said, noting that the topic of a possible candidate had come up repeatedly during the radio show.

“I can’t make any promises because, for now, I’m focusing on the youth of the country.”

She said that if she becomes the candidate, she would give it her best, adding that she would also support anyone who is interested in being the candidate or who the district calls on to represent them at the poll.

Central Leeward has been represented by the Unity Labour Party since 1984, and  Orando Brewster, a physician, is into the second year of his first five-year term as MP for the area.

“I have every confidence in these young people who were elected to serve this great party and they have my full support, we will work together for a better SVG.”

John, whoholds a Bachelor of Science in criminology and criminal justice with minors in psychology and international relations, said that Buju Banton’s “Destiny” is one of her favourite songs.

“What we’re asking is exactly what the Young Democrats have already given to us: the agreement to be a part of a movement that wants to fight to preserve our democracy, that wants to see the youth of St. Vincent and the Grenadines grow and just to see the economy transformed.

“So they’ve agreed to do their part. And we, as the leaders, we have to ensure that the policies that we argue about, that there are good discussions, they are in favour of the youth, that they ensure that the youth have some form of financial stability coming from these policies, and that we ensure that our youth are not destroyed.”

She said that the crime situation shows the involvement of youth.

“So we have to try to pull them back, as leaders. And the way we do that in politics is through our policies and the events and activities that we use to engage these young people.”

John said she supports the view of NDP Senator Severn John, in her featured address at Sunday’s convention, that the dormancy of the National Youth Council (NYC) for some 15 years is “crying shame”.

“… but it is so sad that under his administration the youth council really died,” John sad, referring to King, who was elected to Parliament in 2020.

“… as somebody who is under 30, I haven’t experienced that (NYC) because the Unity Labour Party managed to kill that like it manages to kill a lot of positive things. So we will work towards reviving the youth council. We will put some energy and some effort towards that,” King said.

“So I join with Senator John in saying that it is a crying shame that we no longer have the National Youth Council.”

The Young Democrats leader also said that while people have expressed delight at her presentation, she wants supporters of the NDP to know “that I’ve joined the leadership of the New Democratic Party but we are not here to compete against each other as young women”.

“I know sometimes some of the harshest critics are women, but the New Democratic Party, as the Women’s Arm says, ‘Just wow!’

“We just like to admire each other and complement instead of competing. So even though I am here, I’m not here to diminish the efforts of anyone who was here before but to continue from where they started and to work along with everybody so that we can form the next government. Because at the end of the day, there are people depending on us to kind of bring them out of that depression that the ULP has put them under.”