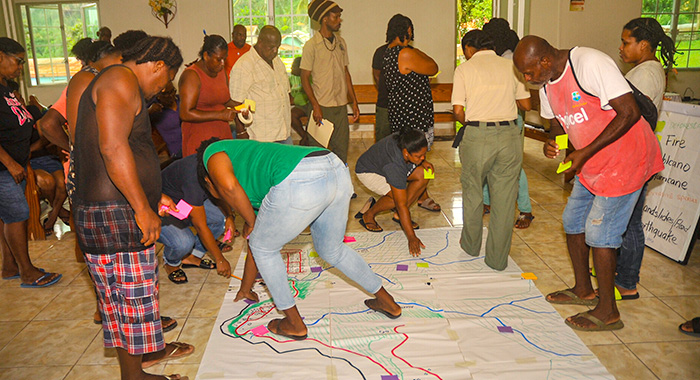 The Geographical Information System (GIS) database at the Physical Planning Unit has been enhanced, with the addition of new data obtained during a two-day climate justice workshop in Sandy Bay last week.

The workshop was held under the umbrella of the Caribbean Youth Environment Network (CYEN) as part of its Climate Justice Awareness initiative among indigenous communities and brought together more than 100 participants from communities north of the Rabacca Dry River.

“It was a data-gathering, risk-mapping exercise and they were supposed to identify stressors- things that affect them as it relates to climate change,” Dwane Allen, who heads the GIS Unit, explained

In Sandy Bay the stressors and calamities identified included deforestation, threats from tsunamis and storm surge, landslides and flooding, hurricanes, the effects of the volcanic eruptions, earthquakes, and invasive species.

Allen said the information has been transferred to digital format in the unit’s database and “it will complement what we have”.

The workshop had an estimated target of 40 persons each day but saw participation from more than 100 persons, principally from Sandy Bay who spent most of the second day engaged in the mapping exercise.

A majority of participants were youth and women farmers whose livelihoods continue to be negatively affected by the fall out of the April 2021 eruptions of La Soufriere.

The database serves as a repository for all the GIS information in St. Vincent and the Grenadines, providing information to all the government departments, agencies, private entities and international originations.

Allen said, as an example, the unit may have base maps demarcating a general area that is prone to landslides but with workshops such as the one held last week, they are able to get more specific information that more precisely pinpoints vulnerable locations.

“It is the community telling you places in the remote areas that you have landslides … We’re talking about farmers now being able to tell you how landslides up in the mountain are affecting their livelihoods and all these types of things, so we tap into a whole different data source which complements what we already have, so the decision-making ability now is better.”

The unit has generated maps of Sandy Bay arising from last week’s workshop and has also completed similar maps for Stubbs, where the JEMS Community organisation recently held a similar exercise.

It is also completing work on maps for Biabou, where another JEMS mapping workshop recently took place.

Allen explained that apart from the new data obtained, such workshops allow for the fostering of a lot of community interaction, bringing together people from different backgrounds engaged in constructive dialogue.

The main facilitator of the two-day workshop, Andrew Simmons said quite a lot of information came out of the workshop and the St Vincent’s experience will now feed into the final report to go to CYEN by next Friday that will be part of conclusions to inform a one-week workshop to be held in early December in Trinidad.

The Barbados-headquartered CYEN has held similar climate justice workshops among indigenous communities across the region.